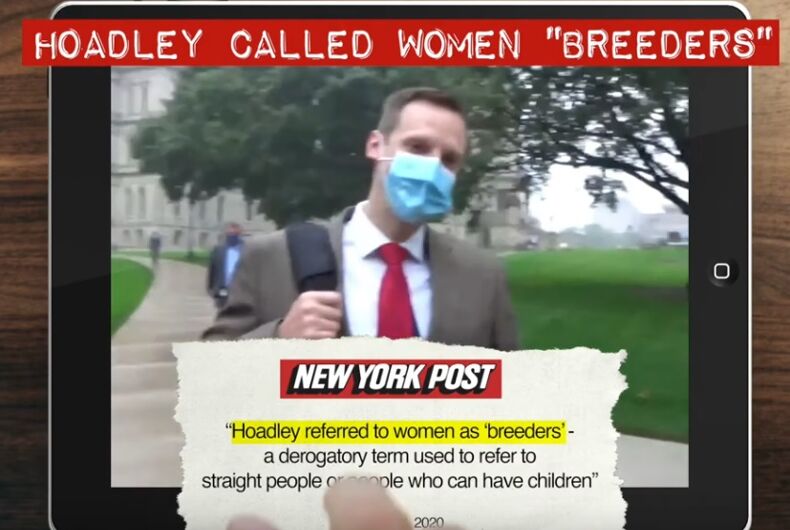 The ad says he called women "breeders," but he wasn't talking about women specifically and he wrote "breeder," singular.Photo: Screenshot/YouTube

A gay Congressional candidate in Michigan who is challenging an anti-LGBTQ Republican is being targeted by an ad that calls him “creepy” for statements he made over a decade ago that were wildly taken out of context, as part of a larger campaign that has called him “a meth-using, pedo sex poet.”

John Hoadley is running as a Democrat for the U.S. House and the Republican super PAC Congressional Leadership Fund (CLF) is using words from his Live Journal from 2004 to 2007 to imply that he’s a pedophile who takes meth. At the time, Hoadley was in his early 20s, while his Republican opponent was in the U.S. Congress voting for a constitutional amendment to ban marriage equality.

CLF’s ad accuses Hoadley of being “creepy” because, the ad claims, he called women “breeders,” said he wanted to “learn about crystal meth,” admitted to having sex with a “victim,” and wrote the words “four-year-old in a thong.” The blog has already been deleted.

In context, though, the quotes are very different. He wrote in June 2005 about going to “straight bars” and he used the word “breeder” to refer to straight people of all genders: “I’m not going to lie: breeder=weird/bad dancers.”

CLF’s reference to Hoadley wanting to “learn about crystal meth” is even more outrageous: Hoadley was writing about going to a meeting to literally learn about the dangers of the drug and even told his blog’s readers, “Don’t do meth.”

The ad’s claim that Hoadley was a sexual predator with a “victim” is a reference to a poem he wrote about calling a man to discuss hooking up: “I turn to my little black book that’s commonly called a cell phone. My fingers walk as I talk to the latest victim of my sexual conquest.”

Poetry criticism aside, the line was not about sexual assault, but about talking with a potential partner before having sex.

The attacks calling Hoadley a pedophile have been spread online by conservatives with the National Republican Congressional Committee called him “a meth-using, pedo sex poet” because of the posts.

Even the rightwing New York Post wrote about the blog entries, but it did not include full sentences to show how the words were being used.

Hoadley’s opponent, incumbent Rep. Fred Upton (R-MI), has said that he can’t stop the attacks since they’re being run by an independent super PAC, but his campaign voiced support for the attacks.

“The facts are the contents of the blog were written by Jon Hoadley,” said Upton campaign manager Nate Henschel. “He deleted the blog as a candidate for Congress until his writings resurfaced election night. He has since apologized, acknowledging his words were hurtful.”

“For Fred Upton to claim he cannot stop these disgusting and bigoted attacks on Jon is absurd – they are key to his campaign strategy,” said Annise Parker of the LGBTQ Victory Fund in a statement. “Fred has given nearly $1 million to the NRCC, has close ties to the operatives producing these mailers, and is a favorite of the extreme right-wing media outlets perpetuating these claims.”

Upton got a score of 15 out of 100 on HRC’s most recent Congressional Scorecard because of his refusal to co-sponsor almost all pro-LGBTQ legislation, including the Equality Act, an anti-bullying bill, and a bill that would label conversion therapy a form of fraud.

And the LGBTQ Nation Heroes of the Year are…