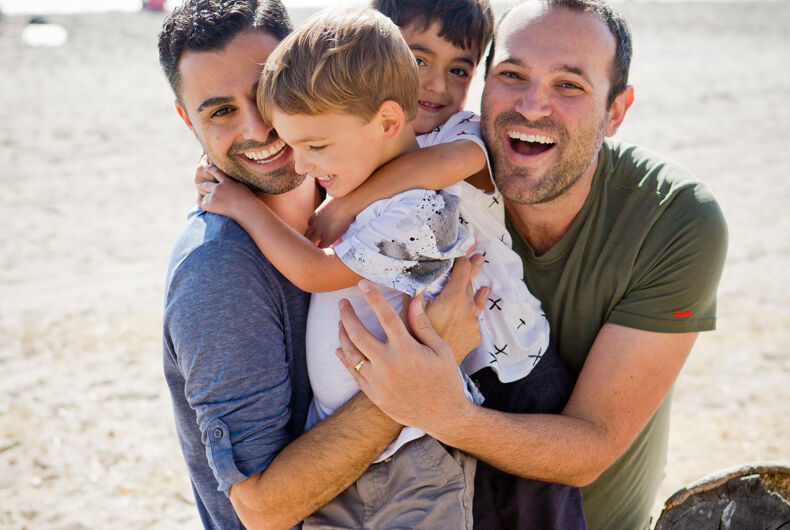 Despite the Trump administration’s insistence with a number of LGBTQ families and their children, applying children do “not require a biological relationship between a child and the citizen parent through whom citizenship is claimed” to be citizens, according to the Immigration and Nationality Act and settled Court interpretation of the law.

“After years of the federal government denying Andrew and Elad’s rights as a married couple, the Ninth Circuit has unequivocally ruled in the family’s favor,” Aaron C. Morris, co-counsel for the Dvash-Banks family and Executive Director of Immigration Equality, said in a statement.

The ruling was announced this Friday, concluding nearly 3 years of legal limbo. In 2010 Andrew – a U.S. and Canadian citizen – married Elad -an Israeli citizen – in Canada. They became fathers in 2016 via surrogacy, with each boy being conceived using one of their father’s sperm and a donor egg.

So while Andrew and Elad are both listed as parents on Aiden and Ethan’s birth certificates, the Trump State Department would only recognize Aiden as a naturalized U.S. citizen when the family applied for passports. So, with the assistance of Immigration Equality, they filed a lawsuit against them.

The Dvash-Banks family were unfortunately not the only LGBTQ family with children to face difficulty under the Trump administration. Roee and Adiel Kiviti are currently in court in defense of their daughter Kessem’s citizenship, currently being appealed by the Trump administration in federal court. Allison Blixt, Stefania Zaccari, and their two children faced a synonymous experience.

Eventually, Judge John F. Walter ruled in the Dvash-Banks’ favor in February 2019, deeming that past precedence with similar cases made it clear that there was no reason to question Aiden and Ethan’s citizenship. Since Andrew was an American citizen that had lived in the U.S. for a period of time, and was the legal father of both children, then both should be recognized as American citizens.

Breaking: WE WON! A US appeals court unanimously upheld a ruling recognizing the citizenship from birth of Ethan Dvash-Banks, a twin boy born abroad by surrogacy to Andrew and Elad Dvash-Banks, a married gay couple.

“Other than the gender…the factual circumstances [from past cases] are indistinguishable from the facts in this case,” Walter wrote in his ruling at the time.

18 months later, a three-judge appellate division panel of the Ninth Circuit found no reason to challenge that. “No longer will these parents have to worry that their twin sons will be treated as if they were born out of wedlock simply because they have two fathers,” Morris said of the decision.

Still, Immigration Equality notes that this will not stop the State Department from enforcing their internal policy on “the unknown number of families” affected by it.

“Every federal court who has heard this issue has now found the State Department’s policy to be contrary to the intent of Congress and U.S. law,” they stressed in a statement. “Immigration Equality currently represents three other same-sex married couples fighting for their children’s rights to be recognized as U.S. citizens.”