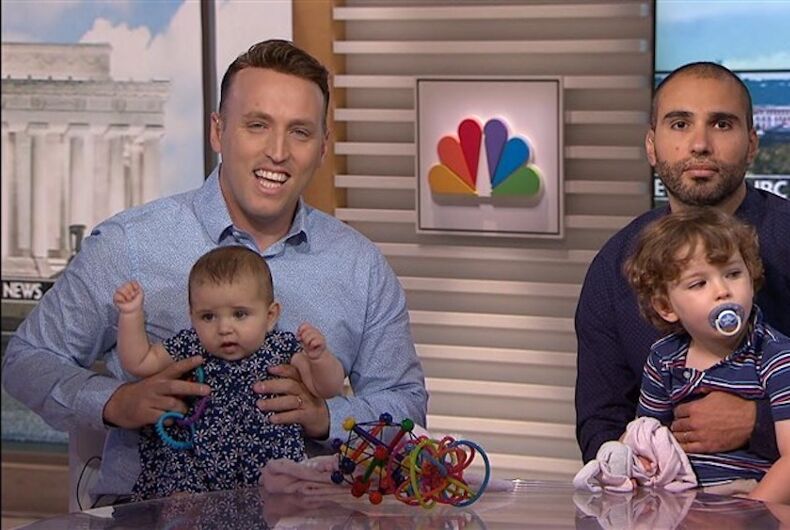 Roee and Adiel Kiviti have been forced to fight the Trump administration over their daughter’s right to be an American citizen. The married men are both citizens.

Since their daughter was born to a surrogate in Canada, the government has continued to assert that young Kessem isn’t a citizen despite being born to American parents. Now the State Department is appealing a federal court ruling that decided the child is a citizen.

Section 301(c) of the Immigration and Nationality Act states that “a baby born abroad to married parents is a U.S. citizen at birth when both parents are U.S. citizens and one of them has resided in the United States at any point prior to the baby’s birth.”

Section 320 of the Immigration and Nationality Act (INA 320) provides that children acquire U.S. citizenship if they satisfy certain requirements before age 18 which include:

Kessem Kiviti meets all the qualifications to be a citizen. The couple’s case is actually one of a handful of similar cases being fought in courts against the Trump administration’s policies against same-sex couples.

The legal snag creating problems for the Kivitis and other gay couples began in 2017 when the State Department changed its handing of the 1952 Immigration and Nationality Act (INA). Before 2017, under the INA, a child born to a married couple living abroad had a right to American citizenship at birth if one of their parents was an American citizen.

The Kivitis’ case is similar to that of Andrew and Elad Dvash-Banks, a married American-Canadian and Israeli couple whose surrogate-born son was denied a passport when the State Department said he wasn’t American because he had the Israeli-born father’s DNA.

The U.S. District judge, in that case, ruled that the law doesn’t require a person born during their parents’ marriage to demonstrate a biological relationship with both of their married parents. A woman’s husband is presumed to be her child’s father even if no DNA test has confirmed his paternity, and even if the couple knows he is not the child’s biological father because they used donor sperm.

A similar legal battle is also being fought in the courts over the Zaccari-Blixt family, a female same-sex couple with surrogate-born kids.

“Once again, the State Department is refusing to recognize Roee and Adiel’s rights as a married couple,” Immigration Equality Executive Director Aaron C. Morris said in an emailed statement. The group is part of a team representing the couple in court.

“The government’s attempts to strip Kessem of citizenship are unconstitutional, discriminatory, and morally reprehensible.”