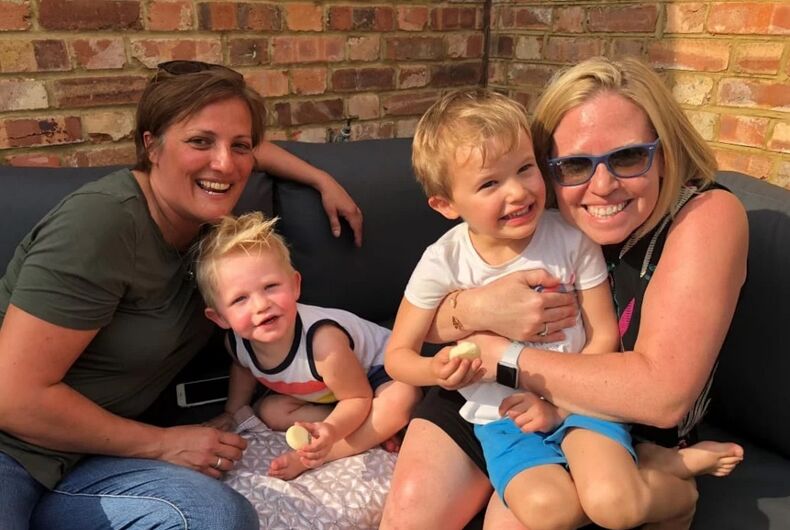 Allison Blixt, Stefania Zaccari, and their two children. The State Department said that only one of the children had birthright American citizenship, despite both moms being named on both the kids' birth certificates. Photo: Allison Blixt

A Trump administration change to how immigration law is implemented has led to the children of same-sex couples being denied American citizenship.

Several years ago, the State Department issued rules to how it would implement the 1952 Immigration and Nationality Act (INA). Before, under the INA, a child born to a married couple living abroad had a right to American citizenship at birth if one of their parents was an American citizen.

This changed nothing for heterosexual married couples. Passport applications don’t ask if a child was conceived with the help of a sperm or egg donor, which may cut the biological tie between the child and the American parent.

Related: Why is this lesbian trying to overturn marriage equality?

They also don’t ask for DNA-testing from heterosexual parents in cases where the father is the American citizen, even though his marriage to the mother doesn’t mean that there’s a “biological connection” to the child.

Instead, the State Department usually just assumes that the people who are on the birth certificate are the child’s parents, if the parents are straight.

But same-sex couples stand out, and the State Department isn’t willing to apply the same assumption of parentage to them. Which means that their children can end up being labeled as born “out of wedlock” for the purposes of immigration law, even if their parents were married.

The Daily Beast talked to several families that have been unable to get passports for their children. Allison Blixt, who is American, and her wife Stefania Zaccari have been living together in London since 2008 because they couldn’t find any way for Zaccari to stay in the U.S.

When their first son Lucas was born in 2015, they tried to get him an American passport.

“I thought he would get citizenship, because we were married,” Blixt said. “He would be viewed as my child, no question.”

Because Lucas was born to Zaccari, he was considered an “out of wedlock” birth, even though Blixt and Zaccari were married at the time of his birth and both were on his passport.

Two years later, when Blixt had their second child, Massimiliano, he was able to get an American passport right away.

“They’re basically saying, ‘Yes, Massi is your son, but Lucas isn’t.’ How do we explain that to our kids, that they’re not the same? That’s appalling,” Blixt said.

“He’s being treated like someone who has no connection to the U.S., much as a stepchild would. It’s offensive.”

Earlier this year, gay dads Andrew and Elad Dvash-Banks and their two sons made headlines when a federal judge ruled in their favor.

Because Elad’s sperm was used to create one of their sons, and only Andrew is an American citizen, that son couldn’t get an American passport. But they took their case to court.

“The basis for the State Department’s imposition of a biological requirement is its strained interpretation” of immigration law, the judge wrote.

But the State Department announced last week that it was appealing the decision, a process that could take years and could result in discriminating against LGBTQ families.

“When the government appealed last week, I mean… I thought, I can’t believe it,” Blixt said. “If we want to actually move to the U.S., we can’t just wait until the case is resolved. We have to find other solutions.”