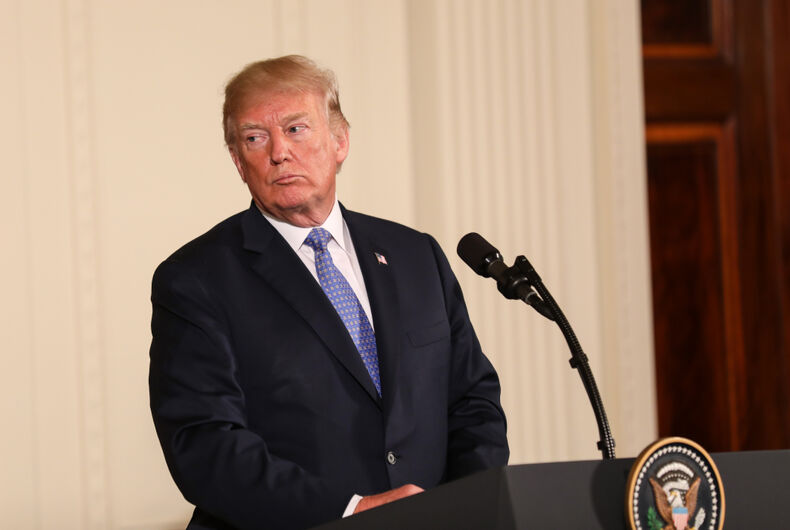 April 27, 2018: US President Donald Trump speaks at a press conference in the East Room of the White House alongside German Chancellor Angela Merkel.Photo: Shutterstock

President Donald Trump, following his administration’s initial ban on anti-discrimination training within government offices, announced an expansion of the policy on Twitter. Now anyone contracted or granted funds by the federal government is not allowed to offer training to prevent race-based or sex-based discrimination.

After testing the waters with the ban over Labor Day weekend – much to the joy of hate groups – Trump announced this expansion himself after signing yet another executive order. The order outlaws education on “divisive concepts” that cause “discomfort, guilt, anguish” to its subject.

The initial ban was revealed in a memo by Russell Vought, director of the White House’s Office of Management and Budget, which has oversight in the executive department. This executive order expands those efforts to include “executive departments and agencies, the U.S. military, federal contractors, and federal grant recipients.”

This is to prevent what Trump calls “indoctrination” on “white privilege” and “critical race theory” and is a counter-measure to the growing popularity of the New York Times’s 1619 Project that details the history of slavery and racism. It also removes “race or sex scapegoating,” including “materials teaching that men and members of certain races… are inherently sexist and racist.”

Trump tweeted that such ideas were “a sickness that cannot be allowed to continue,” asking those in the government to “please report any sightings so we can quickly extinguish!” on September 5.

But any training meant to promote diversity, such as education on preventing LGBTQ discrimination, will likely be caught in the mix. Training on sexual harassment could also be stopped, based on the language in the order.

Anti-LGBTQ activists are excited to prevent such diversity training, such as Scott Lively, who called it “a tool of social engineering… [first used] by the homosexuals.”

Trump tweeted in announcing this expansion that “Americans should be taught to take PRIDE in our Great Country, and if you don’t, there’s nothing in it for you!”

…with our Country, the United States Military, Government Contractors, and Grantees. Americans should be taught to take PRIDE in our Great Country, and if you don’t, there’s nothing in it for you!

In response to the news, Erin Uritus, the CEO of Out & Equal Workplace Advocates said in a statement that the executive order is “gaslighting enshrined in policy.”

“This act is the real-life progeny of Orwell’s thought police. It cannot stand unchallenged. It is fundamentally un-American and it is dangerous. Our values prioritize dialogue over censorship,” Uritus said.

Uritus suggested that Trump should attend their upcoming Out & Equal Workplace Summit, which trains those at Fortune 1000 companies “how to confront bigotry and racism [in the workplace] and build cultures of belonging.”

“President Trump should come. He could stand to learn a thing or two,” she said.

The Hill reports that these actions are Trump’s attempt to “appeal to his base, and to white voters specifically” weeks before the election. This follows his announcement that he is establishing “The 1776 Commission,” which would implore for education that highlights “the miracle of American history” in honor of the United States’s 250th anniversary in 2026.