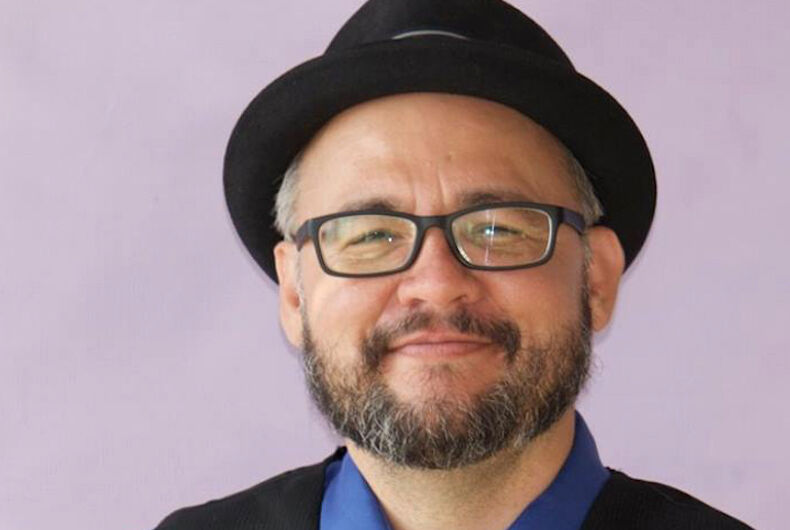 Drago Renteria is known to many as “the Father of Deaf Queer Activism.”

25 years ago, he launched the Deaf Queer Resource Center (DQRC), a virtual organization that remains one of the only national resources for the Deaf queer community. As founder and Executive Director, Renteria has spent the past two and half decades fighting to provide much-needed resources to a group that is too often ignored.

“So much is not accessible to us,” he told LGBTQ Nation. “For example, there are now LGBTQ community centers all over the country. But oftentimes, their programs and support groups are not accessible to local Deaf queers.”

Many community centers, Renteria continued, say they do not have the money to hire interpreters. As such, DQRC has tried to fill the void and offer a little bit of everything.

“We provide peer support, support groups, information and referrals, educational workshops, work to increase visibility, educate on accessibility, and we also work to preserve Deaf LGBTQ history (Deaf queers are rarely ever mentioned in either Deaf or queer history books, yet we have very rich histories).”

Renteria said DQRC has served thousands of people over the years.

“He is certainly one of the heroes of our community,” said Rob Roth, a friend of Renteria’s who nominated him for Hero of the Year.

“He was one of the first Deaf persons to publicly transition from female to male, paving the way for others to unashamedly follow. As a Latinx person, he has also inspired me, a white cis gay male, to think and speak out about intersectionality, social justice and transgender rights.”

In addition to the many barriers Renteria has broken as an individual, DQRC has made history many times. For one, the organization is behind National Deaf LGBTQ Awareness Week, which started in 2018.

“One of our main goals for National Deaf LGBTQ Awareness Week is to see it implemented and celebrated at all of our Deaf schools,” said Renteria, “so that our Deaf LGBTQ youth grow up feeling proud, empowered and knowing they are not alone.”

Because DQRC’s work has always been virtual, the pandemic has not had a huge effect on its day-to-day operations. Nevertheless, Renteria said the organization has experienced a drop in funding opportunities since the pandemic began, and it has also seen the needs of the people it serves increase.

“We have seen a huge rise in the need for direct support services,” said Renteria. “Many people right now, and that includes Deaf queers, are struggling with their mental health.”

Renteria is proud, he said, of DQRC’s long history of increasing visibility, not only for the Deaf queer community but also for the wider Deaf community. When he founded the organization in 1995, there were only two other major Deaf-related websites on the internet. Renteria’s was the only one focused on LGBTQ.

“DQRC promoted positive visibility and empowered Deaf queers to take pride in their identities at a time when homophobia and transphobia were rampant and it was not “cool” to be LGBTQ,” he said. “We were, and continue to be, on the frontlines.”

“So much has changed since then and our work has directly contributed to this change. It’s been beautiful to behold.”

Fact #2 of 25 Random Facts About the Deaf Queer Resource Center ⠀ The Deaf Queer Resource Center’s (DQRC) website was the first known Deaf LGBTQ-focused website on the Internet. It was created by Drago Rentería and officially launched on September 1, 1995. This is ancient in Internet time. (For reference, Google didn’t come into existence until three years later on September 4, 1998.)⠀ ⠀ Curious to see what it looked like back then? ⠀ ⠀ Swipe left to see some screenshots of it!⠀⠀⠀ ⠀ (These screenshots were taken by the Internet Archive in October 1996.)⠀ ⠀⠀⠀ Back then, most websites were plain and static with very few graphics. DQRC’s website was considered cutting edge at the time. The website served to support, empower, inform, unite, and help make the Deaf LGBTQ communities more visible at a time when most Deaf LGBTQ people were shunned and considered outcasts by both the larger Deaf and hearing communities. ⠀⠀⠀ ⠀⠀⠀ There was no social media back then and the Internet was still relatively new. DQRC’s ”Point of View Cafe" bulletin board was a way for our communities to connect, discuss issues, share information and find support. Some of the ongoing topics discussed included Deaf/Hearing relationships (and whether they worked), Deaf LGBTQ parents and families, HIV/AIDS in the Deaf community, a debate on the usage of the word 'queer', coming out support, youth support, and discussions on other issues impacting our communities.⠀⠀⠀ ⠀⠀⠀ P.S. If you look closely at the background, you'll notice illustrations of people signing "lesbian" and "gay" and some ASL letters for "queer" and "bi". ⠀⠀⠀ ⠀⠀⠀ Coolness.⠀⠀⠀ ⠀⠀ ***⠀⠀ ⠀⠀⠀ [image descriptions in comments]⠀⠀⠀ ⠀⠀⠀ #DeafQueerHistory #DeafLGBTQHistory #LGBTQHistory #LGBTQHistoryMonth #QueerHistory #QueerHistoryMonth #DeafQueer #DeafLGBTQ #DeafLGBTQIA #DeafLGBTIQA #DeafGLBT #LGBTQDeaf #LGBTDeaf #DQRC #InternetHistory #Deaf #DeafHistory #LGBTQ #Queer #LGBTQArchives #QueerArchives #DeafQueerResourceCenter #DragoRenteria #EarlyInternetDays #DeafQueerArchives #DeafLGBTQArchives #DocumentYourHistory #25YearsOfQueer #25YearsOfDeafQueer

Indeed, Renteria had to wade through a lot of hate to get where he is today. In a 2013 Facebook post, he recalled leading an LGBTQ-themed workshop at the 1993 California Association of the Deaf conference:

“During the presentation, I was repeatedly interrupted and heckled. One guy, in particular, kept interrupting to declare that I was going to hell and being gay was a sin and against God’s will.”

“Another guy interrupted to inquire whether I had AIDS. During the Q&A session, one concerned mother asked if it were safe for her children to be around gay men (she feared they’d be molested or catch AIDS from them). Another interjected that if there were any gay or lesbian teachers at California School for the Deaf, they should be fired.”

His determination to fight through these challenges has touched many lives.

“Drago has doggedly worked through many barriers to continue DQRC and its work, literally without compensation, for 25 years,” said Roth. “His presentations on transitioning and other transgender issues have helped hundreds of Deaf persons in their own transition process, as well as better understanding and acceptance of these issues by the general LGB and Deaf communities.”