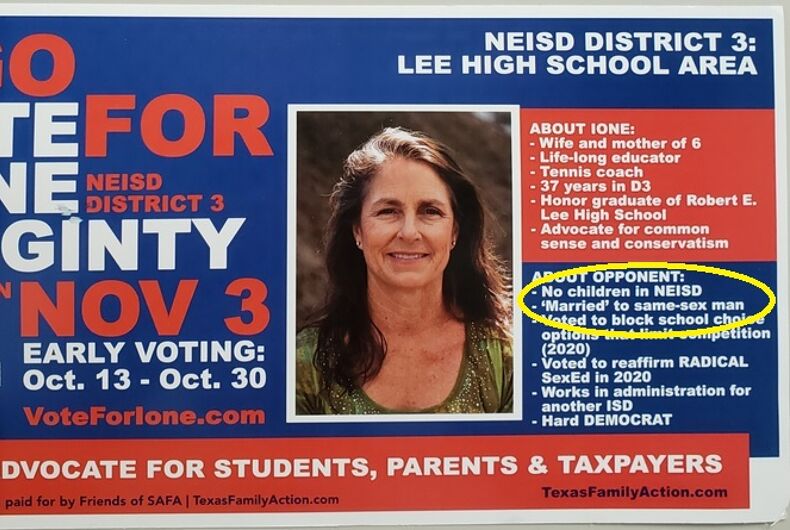 The mailer refers to the "same-sex man" who Omar Leos is "married" to, with scarequotes.Photo: Screenshot/Reddit

A mailer in a school board election is attacking a candidate’s sexual orientation, saying that he’s “Married” (with scare quotes) to a “same-sex man.”

The campaign materials were sent by the San Antonio Family Association (SAFA), an organization that says its goal is to elect candidates who are committed to “protecting, defending, and promoting the family.”

But that only applies to some families, as the ad attacked Omar Leos’s family. Leos is running in San Antonio as a candidate for school district trustee of the North East Independent School District, where a constituent posted a picture of the mailer to social media.

“I’m surprised that they’re using homophobic tactics to go after voters,” Leos said. “It’s insulting. But you know what? I’m proud of my marriage. I’m proud that I am able to marry legally in the United States.”

The mailer supported candidate Ione McGinty, saying she’s a “Wife and mother of 6” – presumably the wife of a man. She said that SAFA made the anti-gay statements in the ad because they support “the biblical definition of marriage is between a man and a woman.”

“I think that’s ridiculous,” she said when asked about how some people on social media said that the mailer is homophobic. “I think they’re heterophobic and I think that those remarks are Christian-phobic because they’re not respecting someone that has a different belief.”

According to the San Antonio Express-News, McGinty doesn’t even send her children to public schools in the district.

Leos, who is gay, was appointed to the school board after a previous member resigned early. He’s running for re-election while McGinty is challenging him.

SAFA said that the fact that Leos was appointed to the school board is proof that the school district is “willing to condone, approve, and even promote homosexuality,” which the group called “unhealthy and unnatural.”

The organization sued the city of San Antonio last year after Chick-fil-A’s bid for a contract with the city’s airport was rejected.

Leos said that the mailer is also incorrect in saying that he voted for “RADICAL SexEd in 2020” – he says he hasn’t cast any votes on matters related to the curriculum since he has been appointed.