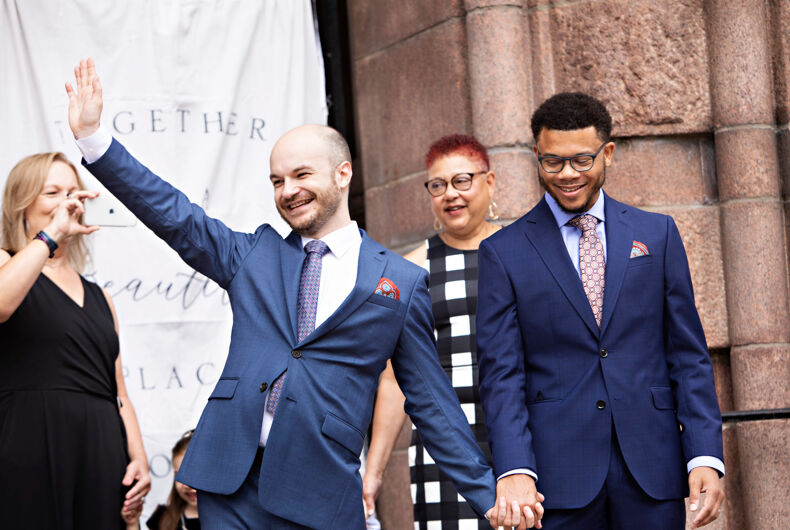 Cole and Lawrence were married on the steps of St. Louis City Hall to protest Amy Coney Barrett's nomination to the Supreme Court.Photo: Alecia Hoyt

Senate Republicans have prioritized the judicial extremist’s confirmation over COVID relief negotiations in a bid to ensconce her in the seat before the upcoming election.

Fear has spread through the queer community about what Coney Barrett’s perch on the Court will mean for LGBTQ rights, but Lot’s Wife Pastor Tori Jameson struggled with how to respond.

“She is notoriously anti-LGBTQ,” Jameson told them. “She has made statements against Roe, against immigration. I worry about our rights being rolled back if she gets in. But I don’t have a lot of political power. I’m just a community pastor.”

Jameson decided to offer free wedding ceremonies to any lovebirds who wanted to take them up on the offer “while we still have the chance.” Not only could days of mass weddings serve as a protest, but it could also give participating couples some safety for their relationships.

As news spread on social media about the “Pop UP Elopements,” the wider community turned out in support of the initiative. What had originally been planned as a one-time event, was expanded to stretch over four days.

Florists, bakers, photographers, decorators, and officiants volunteered their services for joyful ceremonies that touched the heart of the city. In all, 16 couples were wed.

Photographer Alecia Hoyt took stunning photos of couples like Cole and Lawrence (pictured above) and explained why on her Facebook page.

“I am a part of the LGBTQ+ community, and I have dear family and friends who are part of the community,” she said. “Can you believe that it has only been 5 years that these humans have been able to be legally married just like any hetero couple? 5 years, and now it feels like that human right is under threat again with potential upcoming changes to the Supreme Court.”

“They were so dapper they took my breath away, and their entire family was adorable. So cute I couldn’t stand it,” she said.
“Trust me when I tell you they melted my heart.”

Republicans currently hold 53 out of 100 seats in the Senate, but are expected to lose several seats in the election.

Donald Trump has said that he wants Barrett to be approved and sworn in as a Supreme Court justice before the November 3 elections so that she can rule on matters related to the election and how ballots are counted.

“This has been a sham process from the beginning,” said a statement from the Senate Democrats on Barrett’s nomination.

“Amidst a global pandemic and ongoing election, Republicans are rushing to confirm a Supreme Court Justice to take away health care from millions and execute the extreme and deeply unpopular agenda that they’ve been unable to get through Congress.”

Historical photos of men in love: They were born 120 years too early