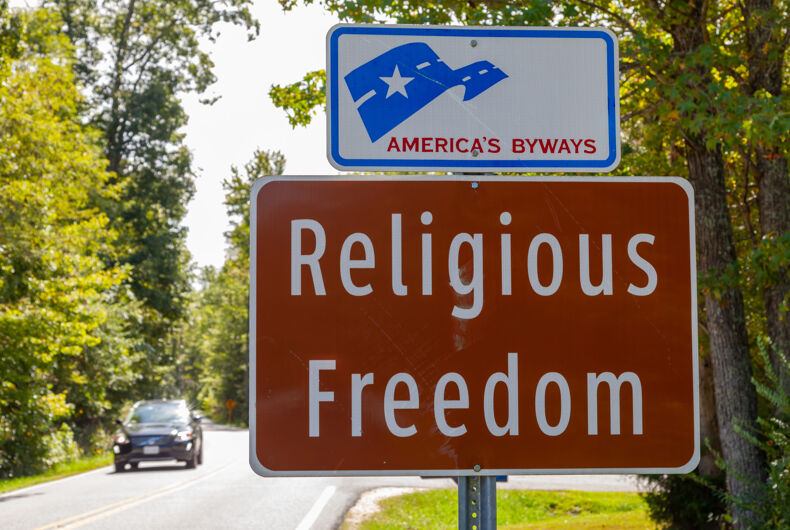 Road sign at the entry of one of Maryland's scenic byways in Waldorf, MD named "Religious Freedom" in reference to Southern Maryland being the cradle of religious liberty in the USA.Photo: Shutterstock

How did we get here? How did our basic human rights become a constant revolving door for our lawmakers and leaders?

Related: It is up to voters to deliver justice for Breonna Taylor & her family. It’s up to you.

On this very premise, officials of the Danbury Baptists Association in the state of Connecticut sent a letter dated October 7, 1801 to President Thomas Jefferson. This letter read in part:

“…Our ancient charter together with the law made coincident therewith, were adopted as the basis of our government, at the time of our revolution; and such had been our laws and usages, and such still are; that religion is considered as the first object of legislation; and therefore what religious privileges we enjoy (as a minor part of the state) we enjoy as favors granted, and not as inalienable rights; and these favors we receive at the expense of such degrading acknowledgements as are inconsistent with the rights of freemen….” [emphasis added].

Jefferson responded with a letter back to the Danbury Baptists Association, giving his assurance by restating portions of the First Amendment to the U.S. Constitution and crafting his now famous quote regarding ‘a wall of separation between church and state’:

“…Believing with you that religion is a matter which lies solely between Man & his God, that he owes account to none other for his faith or his worship, that the legitimate powers of government reach actions only, & not opinions, I contemplate with sovereign reverence that act of the whole American people which declared that their legislature should ‘make no law respecting an establishment of religion, or prohibiting the free exercise thereof,’ thus building a wall of separation between Church & State….”

But as comforting or encouraging Jefferson’s sentiments were, the Danbury Baptists – indeed, everyone of every faith and no faith, background, and social identity – needs to remain forever vigilant that their rights gained, and governmental promises made, can at any moment be weakened, taken away, and reversed.

The people’s rights are often based on the whims of leaders and on the political climate of the times, whether within dictatorial authoritarian regimes or in liberal representative democracies.

Take as one example the current composition of the U.S. Supreme Court. The balance of power has switched after the death of progressive Justice Ruth Bader Ginsburg and the inevitable confirmation of ultra-conservative Amy Coney Barrett.

We are now in jeopardy of losing the Affordable Care Act, which provided quality and affordable health insurance, including the groundbreaking provision of guaranteed coverage to people with preexisting conditions and the benefit of carrying dependent children on policies up to age 26.

We are now in jeopardy of the court reversing its 1973 ruling in Roe v. Wade guaranteeing women the right to control their bodies and soon possibly leaving it to the individual states to decide.

We are now in jeopardy of the court reversing its 2015 ruling in Obergefell v. Hodges guaranteeing marriage equality nationwide and possibly leaving it to the individual states to decide.

While national and state legislators have falsely claimed there is some sort of conspiracy that Muslims are imposing Sharia law in the U.S., who knows how far up to the line legislators will go to further promote so-called “Christian values” in the framing of laws?

In addition to governments, however, the whims of social institutions and their corporate donors also determine the rights and duties of the people within these institutions. Let us take, for example, the Catholic Church’s stand on homosexuality. As written in its 1951, Catechism 2353:

“…Basing itself on Sacred Scripture, which presents homosexual acts as acts of grave depravity, tradition has always declared that ‘homosexual acts are intrinsically disordered’. They are contrary to the natural law. They close the sexual act to the gift of life. They do not proceed from a genuine affective and sexual complementarity. Under no circumstances can they be approved.”

As people have been leaving the Church in droves in many western nations and it has suffered from a dearth of new priests interested in joining, the Vatican has attempted to “soften” its public stance somewhat. For example, based on Catholic Pope Francis’s recent document “On the nature of family life and marital love” (AMORIS LÆTITIA), Philadelphia’s Archbishop Charles Caput wrote on the archdiocesan website, July 1, 2016 that “Catholic belief, rooted in Scripture, reserves all expressions of sexual intimacy to a man and a woman covenanted to each other in a valid marriage,” calling this an “unchangeable” tenet.

He then offered tolerance of a sort to people “with predominant same-sex attractions” if they remain celibate:

“Those with predominant same-sex attractions are therefore called to struggle to live chastely for the kingdom of God. In this endeavor they have need of support, friendship and understanding if they fail. They should be counseled, like everyone else, to have frequent recourse to the Sacrament of Penance, where they should be treated with gentleness and compassion.”

So, we witness a bit of incrementalism offered by the Catholic Church, from the definition of same-sex sexuality as “grave depravity” and “intrinsically disordered” to calling for “gentleness and compassion” if one relinquishes sexuality and lives a chaste life for the privilege of toleration.

Recently, I witnessed incrementalism from the writing of the Orthodox Jewish Rabbi Benny Lau in his document of guidance to other rabbis and to members of the LGBTQ+ community.

“Our religious world is always built of these two levels: the ideal Torah level and the reality of the world as it is,” he wrote. “Those who want to worship God in the world in its entirety should get used to holding in his hands both the ideal Torah and reality and live with both.”

He separated his document into four parts. In the second part, Lau maintained that while the heterosexual family unit is absolutely the ideal in the Torah, he also acknowledged that the world is not ideal and that human relationships need to fit each individual person.

He continued by stating that “the need for a relationship with a person with a homosexual orientation is no different from the needs of all human beings.”

But I must say, on first reading, I felt deeply insulted, outraged, and a certain contempt that same-sex relationships are given second tier standing on this tiered system of heterosexism and heteronormativity. I said to myself, “How dare they define me and my relationships!”

After my informed and compassionate cousins provided me with the context in which Rabbi Lau wrote his document, I realized that yes, this is a major step, possibly revolutionary and it took tremendous courage coming from an orthodox rabbi since it counters age-old dogma. I am certain that he will encounter, if he already has not, an intense pushback from his peers.

And this is the basis for some of the problems around us in that those in power, members of dominant groups, are and always have felt entitled to define the marginalized, the oppressed, the powerless, the minoritized, the “others.”

I understand that progress, lasting progress, possibly can be incremental. Its slow pace is often very frustrating for those who are directly impacted, especially when others — members of the dominant group — have the power to guide the pace of this progress.

I believe that one of the central conditions of true and lasting liberation is for people to have the freedom to define themselves. Unfortunately, this essential condition has not yet been achieved within many if not most social movements.

Incrementalism lends itself easily to the whims of the autocrat, the corporate lobbyist, the legislator, the majority in terms of where it stands on a given issue at a given time.

Alexis de Tocqueville, French political scientist and diplomat traveled across the United States for nine months between 1831-1832 conducting research for his epic work, Democracy in America. He was astounded to find a certain paradox: on one hand, he observed that the United States promoted itself around the world as a country separating “church and state” (which itself is a Christian term, since primarily Christians refer to their houses of worship as “churches”), where religious freedom and tolerance were among its defining tenets.

On the other hand, he witnessed that: “There is no country in the world where the Christian religion retains a greater influence over the souls of men than in America.”

He answered this apparent contradiction by proposing that in this country with no officially sanctioned governmental religion, denominations were compelled to compete with one another and promote themselves to attract and keep parishioners, thereby making religion even stronger.

Though he favored U.S. style democracy, he found its major limitation to be in its stifling of independent thought and independent beliefs. In a country that promoted the notion that the majority rules, this effectively silenced minorities by what Tocqueville termed the “tyranny of the majority.”

This is a crucial point because in a democracy, for without specific safeguards of minority religious, civil, and human rights, there is a danger of domination or tyranny over minoritized peoples. The majority, in religious matters, have historically been adherents to mainline Protestant Christian denominations who often imposed their values and standards upon those who believed otherwise.

Social theorist Gunnar Myrdal traveled throughout the United States during the late 1940s, examining U.S. society following World War II. He discovered a grave contradiction or inconsistency, which he termed “an American Dilemma.”

He saw a country, founded on an overriding commitment to democracy, liberty, freedom, human dignity, and egalitarian values, coexisting alongside deep-seated patterns of racial discrimination, privileging white people, while subordinating peoples of color.

While racism continues, this contradiction has been powerfully reframed for contemporary consideration by religious scholar, Diana Eck:

“The new American dilemma is real religious pluralism, and it poses challenges to America’s Christian churches that are as difficult and divisive as those of race. Today, the invocation of a Christian America takes on a new set of tensions as our population of Muslim, Hindu, Sikh, and Buddhist neighbors grows. The ideal of a Christian America stands in contradiction to the spirit, if not the letter, of America’s foundational principle of religious freedom.”

The GOP has only one tool left to hang onto power. It’s voter suppression.