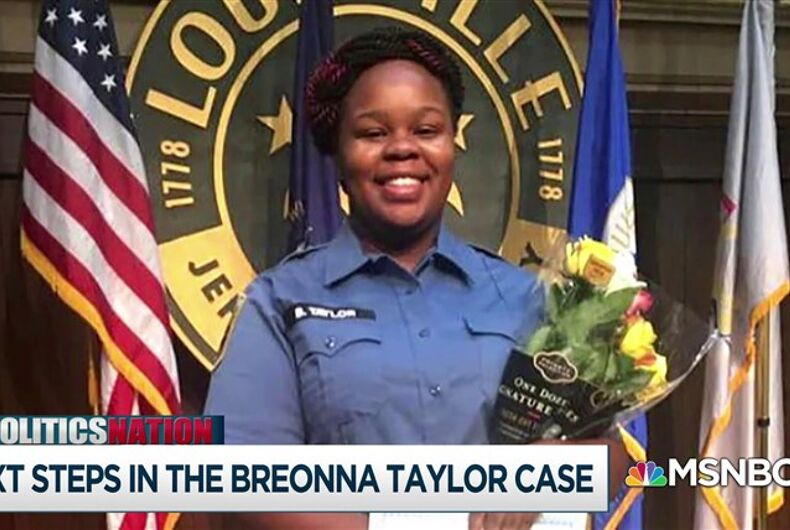 I have not been able to write about Breonna Taylor’s murder since three cops broke into the EMT’s house while she was sleeping without warning and took her life. Her murder activated deep-seated trauma I did not realize I had, but soon realized was deep-seated for many other Black women across the country.

Breonna Taylor dedicated her life even during a pandemic to saving other people’s lives. EMTs work closely with police and fire departments to ensure in people’s scariest moments they come back to their families alive. Yet, in her scariest moment – awakened by people beating at her door – those very same people murdered her.

Knowing time and time again Black women’s lives are not fought for and are too often forgotten when stolen by police or – in the case of too many Black transgender women – lovers, I watched intently, fearing that her death would be swept under the rug like so many others.

I watched as the same people who weeks before were loudly protesting the murder of George Floyd fell silent. As a Black woman, I felt, again, that we rallied loud to protect our brothers, but they and others were not rallying for us with the same intensity and organizing (including the Kentucky Attorney General Daniel Cameron who is a Black man).

As reforms began to take root across the country because of protests, I started witnessing something I had not before. Black women stepped up to lead the charge for justice for Breonna Taylor… one of us. Black WNBA players, musicians and entertainers, and everyday Black women refused to let our nation forget about her death. As Black women rallied around justice, our siblings and people of other races joined in.

I’m advocating for the day that our Black and transgender sisters and siblings are rallied around en masse too in order to spark change.

Last month, we received news that the officers would not be charged or indicted for her murder due to poor instruction to the grand jury. I joined many others grieving with righteous anger the injustice of the ruling.

It is now up to voters to deliver justice for her and her family.

We know what was broken or missing in our policies in her case. We know what needs to be fixed. We must elect people willing to prioritize urgently fixing them at the local, state, and federal level, as well as in police department and union policies and contracts. We also need a US Supreme Court nominee who will strike down qualified immunity when it comes before the court again.

Her death has awakened the power we have as Black women to protect ourselves, and it is on us to never forget it.

If you are not registered do it today. If you have moved or changed your name or signature, update your registration. If you are at risk for COVID or just want the convenience sign up for a vote by mail ballot. Vote early and do not leave until your vote is counted.

You can do most of that by going to our Queer the Vote Center.

Elections are won by those who show up. To change the system we must show up in numbers never seen before. Visit our Queer the Vote Month of Action release for training details on how to do just that.

Black women and our allies must continue to fight for us just as hard as we fight for others. Whether cisgender, transgender, or non-binary, we must fight for us.

We will not be silent about our pain anymore. We will not stand by waiting for those we fight so passionately for to show up for us. We expect better. We deserve better. We demand better.

We will leverage our vote and our influence to receive better. We will #SayHerName and honor Breonna Taylor’s life with action.

Historical photos of men in love: The couples who were bold