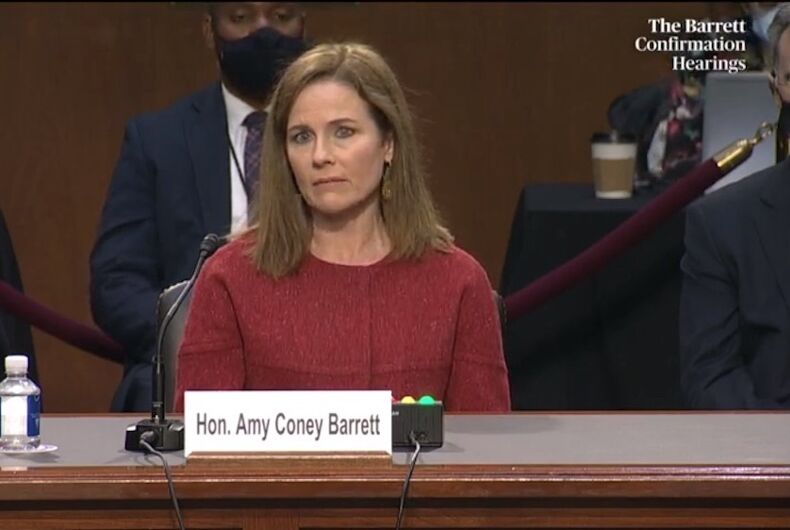 Supreme Court nominee Amy Coney Barrett made waves yesterday when she refused to discuss her position on marriage equality and used an offensive term to refer to gay people. Barrett used the term “sexual preference,” a religious right talking point meant to infer that sexual orientation is a choice and can be “cured.”

After Sen. Mazie Hirono (D-HI) confronted the judge about her use of the term during the confirmation hearing, Barrett offered up a halfhearted apology that quite obviously wasn’t actually apologetic.

In response to questions from Sen. Dianne Feinstein (D-CA) about protecting marriage equality, Barrett simply refused to answer, saying, “I’m not going to express a view” on whether she follows the late Justice Antonin Scalia’s reasoning that marriage equality violates the Founders’ intent.

“Not once but twice you used the term ‘sexual preferences’ to describe those in the LGBTQ community,” Hirono said during her time to question Barrett. “Let me make clear, ‘sexual preference’ is an offensive and outdated term. It is used by anti-LGTBQ activists to suggest that sexual orientation is a choice.”

“That sexual orientation is both a normal expression of human sexuality and immutable was a key part of the majority’s opinion in Obergefell,” Hirono added. “Which, by the way, Scalia did not agree with.”

Let me make clear – sexual preference is an offensive and outdated term.

To suggest sexual orientation is a choice? It's not. It's a key part of a person's identity.

The LGBTQ+ community should be concerned with #WhatsAtStake with Judge Barrett on the Supreme Court. pic.twitter.com/4TWyATMX0Y

Hirono did not give Barrett a chance to respond before ending her remarks. Sen. Joni Ernst (R-IA) used part of her time to allow Barrett the opportunity to clarify her remarks.

“I certainly didn’t mean and would never mean to use a term that would cause any offense in the LGBTQ community,” Barrett said condescendingly. “If I did, I greatly apologize for that. I simply meant to be referring to Obergefell’s holding with regard to same-sex marriage.”

The “apology” offered up by Barrett is a technique popular with religious right opponents of LGBTQ rights. “If” someone was offended, they apologize. But, the language implies, they still hold an offensive viewpoint, and there is no need to apologize if the other person wasn’t offended. The apology isn’t actually a statement of regret; it’s an appeasement.

Barrett, an anti-abortion activist with ties to far-right religious groups, continued to refuse to indicate her thoughts on marriage equality.

“I was certainly not indicating disagreement with it,” Barrett said. “The point of now answering was to simply say it was inappropriate for me to say a response.”

It is up to voters to deliver justice for Breonna Taylor & her family. It’s up to you.