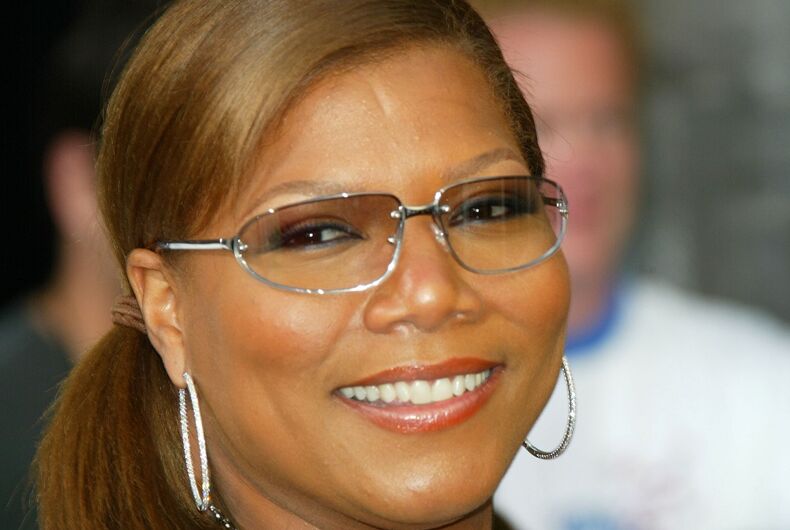 One night in 1996, at a time when America was still grappling with the idea of allowing same-sex couples to marry, Queen Latifah’s sitcom Living Single suddenly stepped up to take a stand in favor of the freedom to marry.

When we think of the classic ’90s sitcoms about groups of friends living together in New York and talking openly about sex, Friends is often the first show that comes to mind. But Living Single came first and set the mold, with Queen Latifah and Kim Coles leading an ensemble of smart, funny women who were decidedly on the side of equality.

I took a deep dive into the show on this month’s episode of my YouTube series, Culture Cruise, where I investigate history’s most important LGBTQ milestones from TV and film. The 1996 episode of Living Single aired just five years after primetime’s first depiction of a same-sex marriage, but it shows just how far the country had come in that short time.

The episode starts with the characters talking about how a friend from college, Shayla, is about to get married – but when Shayla shows up, she drops a bombshell. She’s marrying a woman. Amazingly, while the characters show some surprise, they’re all completely supportive. There’s not a single word of discomfort around homosexuality, which is remarkable for a show that aired in the mid-90s when gay-baiting jokes were in plentiful supply.

In fact, five years earlier, when same-sex commitment ceremonies started appearing on television, the attitude was very different. On the show Roc, we hear family members express shock and dismay, and the studio-audience reaction is far from positive.

So why were things so different when Living Single aired? One reason is likely to be the 1992 presidential election, which brought LGBTQ issues to the public’s attention like never before. Up until that year, queer topics appeared relatively seldom in entertainment or the news, in part because of an organized effort by conservatives to block LGBTQ representation.

But the ’92 campaign brought many of those issues to the forefront: military service; marriage; HIV; nondiscrimination; adoption. The Clinton/Gore campaign was strongly supported by the LGBTQ community, particularly wealthy donors, and they were highly effective in prodding the candidates to address issues that had gone unspoken or ignored in the past.

But while the characters on Living Single show no sign of homophobia, one character is upset for a different reason. Max, played by Erika Rose Alexander, is dismayed that her friend never told her she was a lesbian. Max feels betrayed and lied to, and then she’s shocked even further when she learns that Shayla had a crush on her in college.

In the end, Queen Latifah’s character helps Max see things in a new light, pointing out that Shayla might’ve worried that the crush would jeopardize their friendship, and that might be why she never brought it up. Max and Shayla reconcile and the lingering cloud over the impending marriage clears.

Significantly, at the end of the episode, Max tells Shayla that she would have liked to know the truth all along so that she could “have a chance to rise to the occasion” and support her friend. That’s a huge statement to come from a heterosexual character, essentially communicating to the audience that supporting a queer friend is a moral good.

At the time the episode aired, a lot of people didn’t know how to handle queer issues and certainly didn’t consider allyship an occasion to which they ought to rise.

But over time, America has slowly – sometimes excruciatingly slowly – come around. Gradually, the country is rising to the occasion of supporting equality. It’s just taking the nation far longer to realize what a group of friends on a sitcom already knew back in 1996.