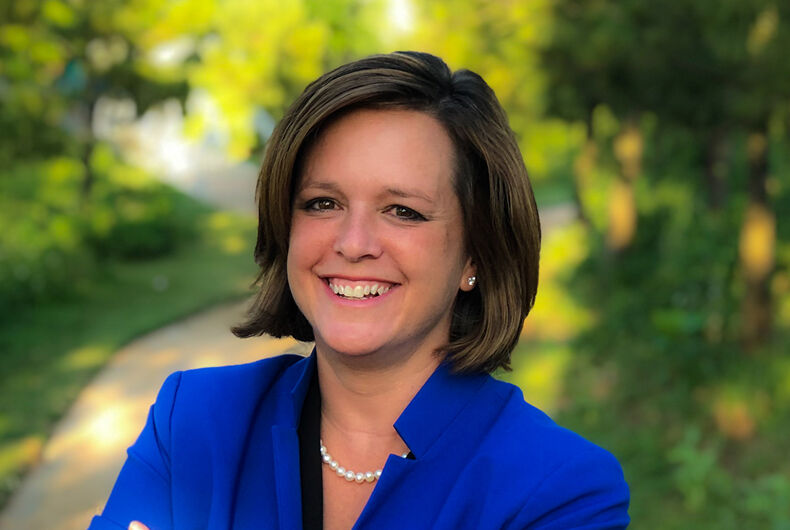 An out lesbian, she is sick of the hold Republicans have had over Texas, she said, and believes she can bring needed change. Her campaign against Republican incumbent Sarah Davis, who has represented District 134 since 2011, is considered one of the most significant in the state. An increasingly liberal community, it has become a district to watch that could help flip the Texas House blue.

Related: Texas judge sues for the right to refuse to marry gay couples

“I am fired up today,” Johnson told LGBTQ Nation. “I’m really excited about this campaign.”

She believes wholeheartedly that she has what it takes to flip the district.

This attitude has not been adopted by today’s Texas Republican party, she said.

“I am a cancer survivor,” she said. “And I have been denied repeatedly coverage because of preexisting conditions, despite the fact that I am healthy and doctors repeatedly tell them I am healthy, and so I sit in the position of about a million Texans who have been held hostage by the partisanship of the Republicans, and my opponent, who have fought the implementation of Obamacare at every turn, and people are suffering.”

Her opponent, Sarah Davis, is considered a moderate Republican, one who has evolved from being pro-life to pro-choice, but Johnson doesn’t see her as all that moderate.

“She’s got a handful of votes she claims her moderate status on, and then look at what she’s done on the others. On guns, she’s for open carry, she’s for guns in school [Davis voted to allow guns on college campuses], she’s made it easier for people to run out and get a silencer, she’s reduced training hours so it makes it easier for you to go to some strip mall and get a concealed hand gun, and she’s bragged of her A rating with the NRA, despite the fact that we’ve had a mass shooting in our district… She gets repeated F grades from the Sierra Club….”

Johnson said she is also concerned that this election will determine the redistricting that will happen based on the 2020 Census.

“Depending on who you vote for this November, these folks will determine what our nation and our states will look like for a decade, meaning, are we going to see continued, repeated gerrymandering to the extent to which in Texas we have had Republicans grossly draw lines to benefit themselves?”

Before she was the Democratic candidate for district 134, Johnson was a human trafficking prosecutor knowing for arguing a case before nine Republican judges on the Texas Supreme Court and winning.

She is credited with helping create a legal framework across the country for protecting child victims of sexual exploitation, built from her work including a case where she defended a 13-year-old girl being charged with prostitution.

If she wins, Johnson will also be one of the only out LGBTQ people serving in the Texas legislature, which is especially significant in a state that has a long way to go on LGBTQ rights, she said.

“The one step forward we have taken as a community in Texas is not because of the Texas legislature or the Republican party. It’s because of the United States Supreme Court [marriage equality].”

Electing more Democrats, she said, is key to advancing equality.

“We’re talking about representing the reality of who Texans are, and better, what we can be… If you truly believe in the issues of equality in our community, the only way you change the impact is to elect a Democratic House.”

If she wins, she looks forward to being sworn in as a representative with her wife beside her.

“My wife and I will show up together to the session and the inauguration, and we will be another example of a committed relationship, and the meaning and definition of marriage today for the rest of the Texas legislature to see.”

Leading up to the election, Johnson wants voters to know she is ready to be their advocate.

“I will not only fight,” she said, “I will keep up my history of actually making progress. We’ve made progress where Austin wouldn’t help. Imagine what we could do on the floor in Austin, for not just our district, and our area, but for the entire state, and that’s what I most look forward to.”

If Donald Trump fools America twice, shame on us