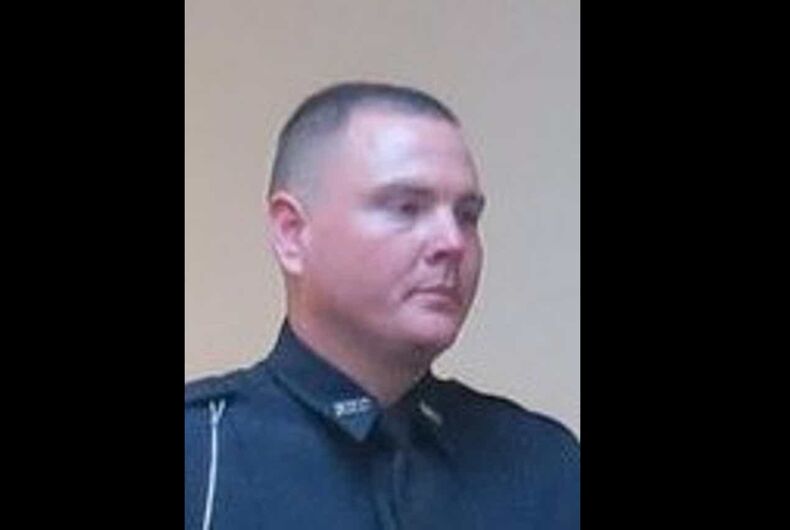 While going to jail can cost a citizen their life as COVID infections ravage the prison population, losing his composure cost Bartow, Florida officer Timothy Daughtry his job. Daughtry called Tyron Smith, a worker at the George Harris Youth Shelter, a “fucking faggot” during a heated confrontation.

Smith was insistent that Daughtry handcuff and arrest a 12-year-old for pulling a fire alarm in the building when there wasn’t a fire. Daughtry refused, telling Smith that arresting a pre-teen for a misdemeanor is ludicrous.

Daughtry was told to separate himself from the situation by his superior after he said the request was “fucking bullshit” and excessive and to “shut the fuck up.” He admitted to swearing during the confrontation and to using the anti-gay slur.

“That made me upset,” he said during an internal investigation into the incident. “I said, well that’s fucking bullshit, you know. I said shut the fuck up. At that point, Sarge told me to be quiet and to walk away — to get in the car. And as I was walking away, I said, ‘Fucking faggot’ and then I got in my vehicle.”

He didn’t help his cause though, when he continued, justifying his use of the slur… with another one.

“It’s just a term that I’ve used growing up, throughout life,” he said. “It’s no different than if I was to say ‘Well that’s gay.’ It’s not, it’s just a term for disdainment, for a particular situation.”

Obviously, being gay is not something to “disdain.”

Daughtry resigned after the investigation was completed.

Daughtry said he didn’t realize Smith is gay, but Smith described himself as “flamboyant” and said it’s obvious he’s gay. Smith said Daughtry looked directly at him while saying the slur.

“To engage in an argument with a member of the community and to use an LGBTQ slur during that argument is unacceptable by anyone, especially a member of the law enforcement community,” interim Chief Bryan Dorman said. “I will not tolerate that type of behavior from any member of this organization.”

Dorman said he would have fired Daughtry if the officer hadn’t resigned.

An Uber driver heard his passenger was gay, so he beat the snot out of him

A drag queen whooped an anti-gay Democrat in the primary election. It was a landslide.