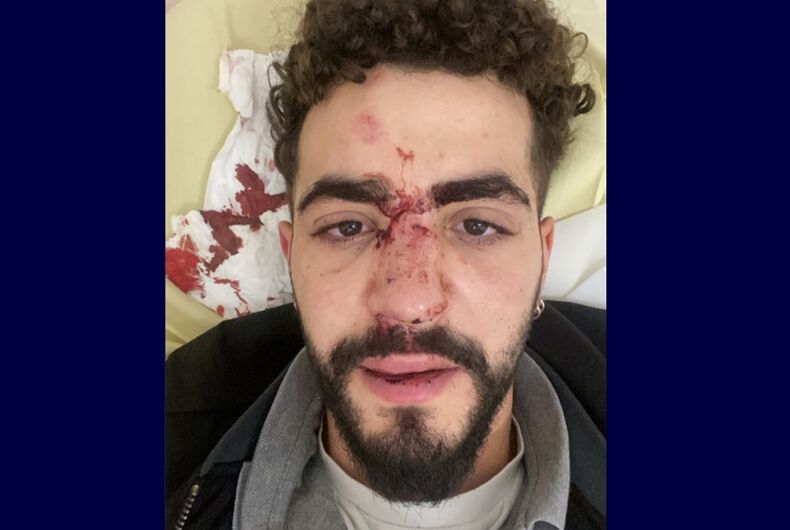 An Uber driver forced a man out of his car when he mentioned that he was gay and then punched him in the face, causing injuries that required stitches, in a horrific late night attack.

The victim, who is just going by the name “Mohamed” in the media, was taking an Uber home with a female friend at 2 a.m. in Paris this past Sunday, September 13.

They had just spent the evening together on a boat and 27-year-old Mohamed told his friend about a boy he was getting to know at the party. While the two were talking in the back of the car, the driver was getting angrier.

At some point the driver asked Mohamed and his friend to get out of the car.

“At that moment, I was completely confused, but he was ranting,” Mohamed, who works as a dancer, told the French LGBTQ magazine TETU. “He started spouting homophobic insults at me, saying he didn’t want a ‘queer’ in his car.”

Out of the car, Mohamed tried to flag down another vehicle for help while his friend tried to reason with the driver.

“I couldn’t take it anymore,” Mohamed said. “I told him that I’m gay, that I’m proud, and that it’s 2020, you aren’t allowed to make the comments that he was making.”

And that’s when the driver allegedly punched Mohamed twice. Mohamed was knocked unconscious and fell over a car that stopped to help them and his nose was bleeding.

The driver left before the police could arrive.

Mohamed said that he started having an anxiety attack when he came to. Paramedics had to take him to the hospital, where he got five stitches and was told he had head trauma.

He now says that he’s afraid to be alone so his friends have been taking turns staying with him.

“I’m still in shock,” he said. “After I filed a complaint with the police, I was walking in the street and for a moment I wasn’t on the pedestrian section. Someone in a moped shouted at me, calling me ‘queer,’ and it hurt.”

In a statement, Uber France said it’s “profoundly” regretful about what happened that night. The company said that it has been cooperating with law enforcement to find the driver.

“When there’s a complaint and a criminal investigation, we systematically suspend the driver,” the statement said.