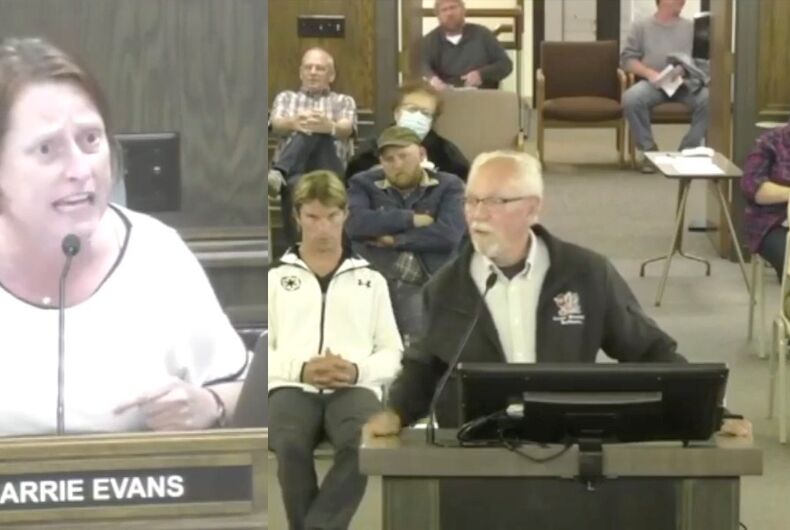 Minot, North Dakota city councilwoman Carrie Evans is the only out lesbian elected to public office in the state, but apparently some constituents didn’t get the message.

Because when one resident took to the floor of the council chambers to complain about a Pride flag, Evans let him have it in one of the most epic political smackdowns ever recorded.

The city had planned to fly the flag during June but postponed after coronavirus prevention measures forced the cancellation of Pride events nationwide. Instead, realizing that festivals simply weren’t happening this year, the flag was put up earlier this month.

“So Mr. Walker, if you’re not aware,” Evans started, “and I think a lot of people in this room are not aware, and have come here just because this is a gay issue, I am proudly the first openly elected lesbian in North Dakota. So that is why I am not paying any heed to your crap.”

“Every single person is entitled to see themselves represented,” she continued. “We are not some group of people who live in San Francisco or Seattle. We are here. We are your elected officials. We are your brothers. we are your sisters, and don’t tell me you’re not hatred or anger. That’s all I feel. I’ve had to listen to it for days now, as has the mayor and many of my colleagues. It is unacceptable.”

“This city is big enough for all of us. Me having a flag flying does not take away anything from your rights. But you know what it does for me? It shows me I live in a city that appreciates and embraces me, and my community. And I can live here and feel safe. That’s what it does. I’m sorry that it doesn’t make you feel comfortable, but we’re here, we’re queer, and we’re not going away!”

Somewhere out in TV land, Julia Sugarbaker shouted “And that’s the night the lights went out in Minot.”

"We are here, and we are your elected officials," Alderwoman Carrie Evans said. After re-watching the Minot City Council meeting on Tuesday night, it angered me even more. There were a couple people that insinuated Minot voters deserved to know that Alderwoman Carrie Evan is a lesbian. Apparently, some voters were upset that she didn't make her sexual preference known during her campaign, as if she was hiding something. It's interesting, however. These same people tell us we shouldn't talk about LGBTQ issues due to religious reasons, and it's "embarrassing' to explain what a Pride flag is to children. So, what is it? It is not my job to tell anyone that I'm gay, unless I want to. It's not my job to continuously "come out" to strangers. It's not Alderwoman Evans job, either. Evans announced that she is the first openly-elected lesbian in North Dakota during a passionate response to a man that was attempting to "expose her," as if there was anything to uncover. Her response gave me chills, and everyone should listen to it. I choose to speak openly about the way I was born, because I know there are other LGBTQ youth that need to hear it, clearly. If you are unaware, LGBTQ youth make up a large portion of the homeless population because their parents disown them. If you are unaware, gay men and women are still jailed or killed in other countries. If you are unaware, LGBTQ members are often warned to avoid certain places when traveling abroad. If you are unaware, it was only five years ago that I was legally allowed to get married in the U.S. If you are unaware, there is still a long ways to go when it comes to equality. Educate yourself, instead of spewing a cherry picked bible verse. As for religion, that's your choice. As for being gay, we were proudly born this way.If you are an ally to the LGBTQ community, you know why the flag is flown. It's because there is still education and understanding that needs to take place. Our lives are not a political stance, or some "taboo" lifestyle. It's simply our life.I will unapologetically continue to educate, expose bigots and make it known to LGBTQ youth that they are supported.Please listen to Evans' response.

“I ❤️JK Rowling” billboard vandalized & removed hours after it went up