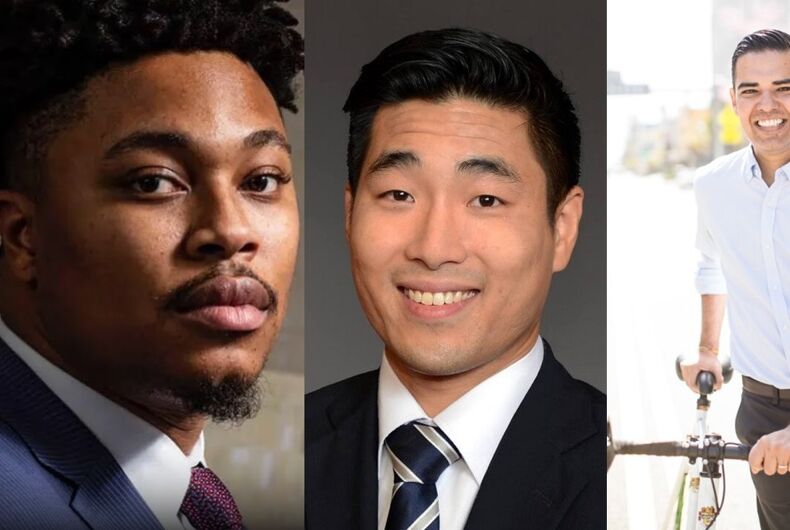 Related: Here’s when to watch LGBTQ people speak at the Democratic Convention next week

Kenyatta, Park, and Garcia are the first LGBTQ people to deliver a keynote address at the Convention.

In 2018, Pennsylvania Rep. Malcolm Kenyatta became the first LGBTQ person of color to be elected to the State General Assembly at the age of 28 in a landslide victory.

“As somebody who inhabits all of these intersections, growing up in an incredibly poor neighborhood to a working poor family, as one of only two openly LGBTQ members of the Pennsylvania General Assembly and the only one that’s a person of color, I see all the different ways that frankly our systems are broken,” he told LGBTQ Nation earlier this year.

Park is the first out gay man elected to the Georgia state legislature and is the only Asian American currently serving in the legislature. He grew up in a Christian conservative church where he regularly heard that homosexuality is an “abomination.”

Today, though, he’s trying to get progressive legislation passed in the state, like a bill that would make Georgia accept the Medicaid expansion and bring health care access to low-income households.

“It’s important for us to introduce and work on passing legislation we think would benefit the state to at least demonstrate to those we represent what exactly it is that we are fighting for,” he told NBC News. “Being in the minority, it’s difficult to pass legislation, but that still doesn’t mean you can’t do it.”

In 2009, Robert Garcia became the first LGBTQ person of color elected to the Long Beach City Council and in 2014 he became mayor of the city. In 2018 he married his husband Matt Mendez.

He has been leading the fight against the coronavirus pandemic in the Southern California city, saying that he has “never been more damn inspired in my life” by the outpouring of volunteers and giving in Long Beach.

“Keeping the virus from spreading literally saves lives,” he told the LA Blade in April. “We are going to get through this together.”

The Democratic Party has billed the 17-person speech as “a new kind of convention keynote.”

“The convention keynote has always been the bellwether for the future of our party and our nation, and when Americans tune in next week they’ll find the smart, steady leadership we need to meet this critical moment,” said 2020 Democratic National Convention CEO Joe Solmonese, who is also the former head of the LGBTQ organization Human Rights Campaign (HRC).

“From the most pro-equality platform in history to the first LGBTQ people to speak as keynote speakers, the 2020 Democratic National Convention marks a turning point for our community,” said current HRC President Alphonso David. “We have fought for a seat at the table for generations, and at this convention more LGBTQ people will serve as delegates than any other party convention in history.”

Buttigieg and Baldwin (D-WI) will address the convention on Thursday night, and the LGBTQ Caucus will meet on Tuesday and Thursday morning.