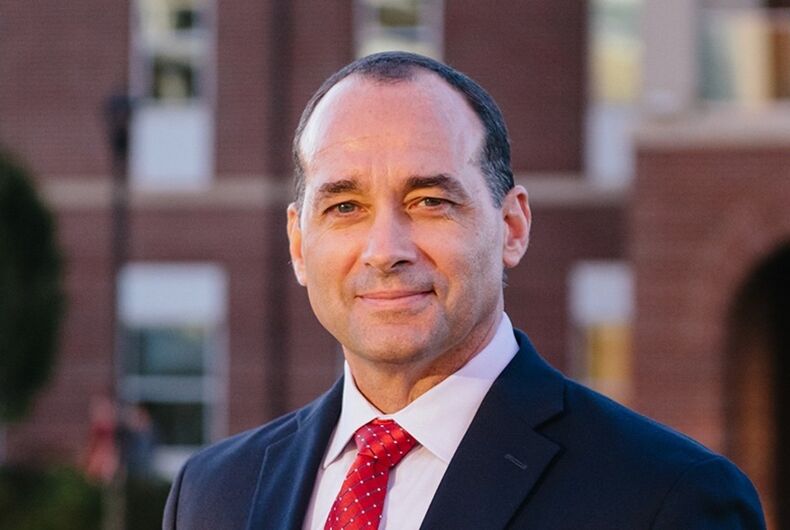 Good is sponsoring a series of campaign meetings with clergy and Republican leaders focused on hard-hitting topics like “What happens when a male member of your congregation goes on vacation and returns four weeks later as a female?”

Related: Here are the antigay politicians who are about to make the fight for LGBT rights easier

Liberty University’s athletic director, Good challenged Rep. Denver Riggleman (R-VA) for the seat after the Congressman officiated a same-sex wedding. Good’s campaign website says he has a “biblical view of marriage,” opposes a “transgender bathroom mandate,” and will defend “religious freedom” and “Judeo-Christian principles” if elected.

He has a long history of railing against marriage equality and nondiscrimination laws.

“What do your church bylaws state regarding a man dressed as a woman who attends a church function and expects to use the women’s restroom?” invitations to the events ask.

The subject line of the e-invite, first revealed by the New York Times, was “Re: when a man becomes a woman.”

While most Christians would assume that their savior, known for being radically inclusive for his times, would welcome any transgender person with open arms, Good’s answer isn’t nearly as godly.

“We’re in the middle of a pandemic that has infected over 100,000 Virginians and a recession that has put millions across the country out of work, but all Bob Good wants to focus on is same-sex marriages,” said Grant Fox, a spokesman for the Virginia Democratic Party. “Virginians need help, and Bob Good is spending his time convening church officials to figure out how to best discriminate against the LGBTQ community.”

Good’s Democratic challenger for the seat, Cameron Webb, would be the first Black physician in Congress. He is currently only two points behind Good in local polling, putting it within reach of Democrats.

While Good has claimed that “a number” of district supporters in “leadership positions” recruited him to run against Riggleman, his nonstop attacks on LGBTQ people, Black Lives Matter, and Latino people have not gone over as well with potential voters and moderate Republicans.

“I was struck by how things like this set back our very real and sincere efforts as Republican individuals and party organizations at all levels to build bridges to and to welcome people not historically associated with us,” Fauquier County Republican chairman, Greg Schumacher, wrote in an editorial recently.