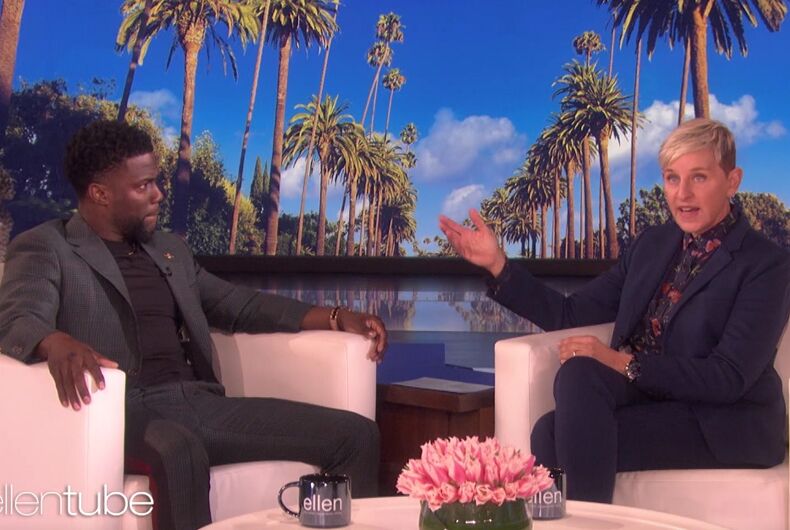 Ellen DeGeneres was spotted with actor Kevin Hart over the weekend after each of the embattled celebrities had publicly come out in one another’s defense recently.

The stars were seen at a restaurant at Rosewood Miramar Beach in Montecito, California, this past Saturday, wearing shirts in fun summer prints. The two sipped wine and talked.

Related: Ellen doesn’t have to be nice to you. She’s not your mom.

Last year, Ellen defended Hart as he faced public criticism for his violently homophobic rhetoric in the past, including saying that he would break a doll house over his son’s head if he caught him playing with one and tell the son “stop that’s gay.”

He also used the word “fag” multiple times on Twitter and made jokes about AIDS.

Hart was slated to host the Oscars that year, but he dropped out. On Ellen’s show, he said that he was facing “slander on my name” because people were calling him homophobic.

Ellen called Hart’s critics “haters” who were “a small group of people being very, very loud.” She said she called an Oscars representative to try to get him the hosting gig again.

During the interview, Hart was anything but apologetic for his rhetoric, even going so far as to say he’s not ready to forgive people for their “attack to end me,” that is, bringing up his old tweets and jokes.

This past year, it was Ellen who faced criticism for allegedly creating a toxic workplace where racism, sexual harassment, and bullying were rampant. Dozens of former employees have spoken to the press about the Ellen DeGeneres Show‘s workplace culture and the lack of support for employees who wanted to file complaints.

“I have known Ellen for years and I can honestly say that she’s one of the dopest people on the fucking planet,” he wrote. “The internet has become a crazy world of negativity… We are falling in love with peoples down fall.”

On Twitter, people were critical of how close the stars are.

Kevin Hart risking bringing Rona home to his pregnant wife to meet with Ellen is very on brand.