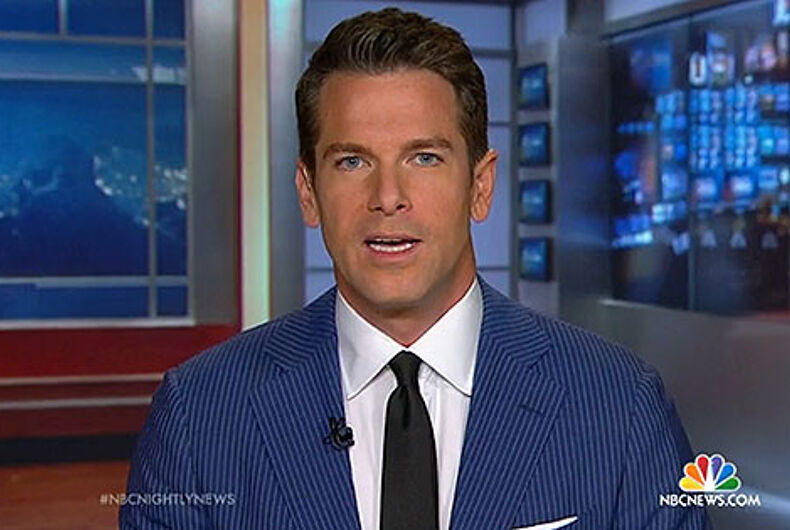 Thomas Roberts, host of the Gay Good News program on Facebook and the first out gay person to anchor a national evening news broadcast in the U. S., has some gay good news of his own.

Roberts has been named the host for Season 4 of DailyMailTV, a syndicated news magazine that airs weekdays in markets across the United States.

Roberts broke the news this month to viewers of his current streaming program, Gay Good News, which he began in June to tell positive stories about the LBGTQ community during the pandemic. He said he and partner Patrick Abner are moving from their current home in Atlanta to New York City because of his new job.

“This is a huge brand,” Roberts said of DailyMailTV. “The show is a co-production between Stage 29 Productions, which is Doctor Phil’s production house, based out of Los Angeles, and The Daily Mail of London. They have been on the air for three seasons. We start Season Four. The official launch is the 14th of September.”

The job marks a return to television for the 47-year-old journalist, a familiar face from years as a reporter and anchor on CNN, MSNBC and NBC. From 2002 to 2007, he worked for CNN as a correspondent and news anchor. In 2010, he joined MSNBC, where he anchored MSNBC Live with Thomas Roberts and was a correspondent for NBC News. For a time, he hosted an early-morning show on MSNBC called Way Too Early, and appeared on Morning Joe and The Today Show.

A native of Baltimore and a graduate of McDaniel College in Maryland, Roberts publicly acknowledged that he was gay in 2006 while speaking at the annual convention of the National Lesbian and Gay Journalists Association.

He became the first out gay person to anchor an evening news broadcast in 2015 when he filled in for the regular anchor one Saturday on NBC Nightly News. He has won the Edward R. Murrow Award and, while with NBC, he won a national Emmy for Outstanding Live Coverage of the Supreme Court’s 2015 decision on same-sex marriage

One of Roberts’ claims to fame is that he was a co-host of the 2013 Miss Universe pageant in Russia. It was the year when a pre-President Donald Trump owned the pageant and supposedly stayed in a Moscow hotel room and partied with two prostitutes who made a never-released “pee tape” with him.

Trump denied that he stayed overnight in Russia but Roberts contradicted him, saying on the record that he saw and interviewed Trump over the course of two consecutive days while filming the pageant.

Roberts left MSNBC and NBC in 2017. The next year, he went to work as a news anchor for WGCL-TV (CBS46) in Atlanta. He left the station 14 months later but stayed in Georgia with his husband, whom he married in 2012.

On June 8, Roberts began his half-hour program on Facebook, inspired by actor John Krasinski’s popular Some Good News production. Roberts’ twist was that his show would feature positive news about the LGBTQ community that others weren’t covering, timed initially to coincide with Pride month. And it was livestreamed from his bedroom.

After June, Gay Good News became a once-a-week program, typically featuring a lengthy interview with an LGBTQ celebrity or newsmaker. His guests have included Leslie Jordan, Billy Porter, Kathy Griffin, and Judy Gold. Because of the pandemic, Roberts conducted his interviews mostly by Zoom, although he did at least one man-on-the-street segment. Abner has served as a production assistant and appeared onscreen occasionally.

Sometimes Roberts’ interviews have been about the guest’s careers and what they’re doing in quarantine. Other shows have focused on topics of importance to LGBTQ community, not always upbeat. Subjects have included professional athletes in the closet, bullying, and teenage suicide after a student has been outed.

He devoted one program to the Supreme Court’s 6 to 3 ruling in June that protects gay and transgender workers from workplace discrimination, a decision that was announced the day his show appeared. That was the epitome of Gay Good News.

The mixture of news and features that Roberts put on Gay Good News is not unlike the mixture shown on DailyMailTV.

The Daily Mail is a middle-market tabloid known for its photos of bikini-clad women. Like many tabloids, its coverage has generated controversy and drawn lawsuits. Wikipedia has barred citations from the outlet after its editors concluded that the tabloid was “generally unreliable.”

The TV program is separate from the tabloid. Part of Roberts’ role, with his Emmy and Murrow award, is to bring credibility to what it covers without going back to the stuffy Eric Sevareid days.

“In a year where the world is battling a pandemic and Americans are heading to the polls to decide on their next President, DailyMailTV will be there to keep its viewers informed with the news that matters to them,” said Clarke, the executive producer, according to The Daily Mail. “As we move into Season Four in September, I’m looking forward to Thomas joining the team and bringing his unique style of reporting.”

“I’ve always been impressed by his ability to pivot from the hard yet important news to the showbiz stories people can’t get enough of,” said Pennington.

Last week, in a show from New York, Roberts spoke about his move.

“It’s nice to be back in New York,” he said. “It’s been a little hectic, as you can imagine, to figure out all of the moving parts that go along with this…We been trying to make all of this work as quickly as possible and get our lives up to speed with both of our careers and the dogs and the pandemic.”

He admitted he has a lot to learn: “It’s like being the new kid at school.”

Although he has a new job, he said, Gay Good News will continue.

“I will do everything in my power to make sure it sticks around,” he said. “Our commitment to you remains firm. Don’t worry. We aren’t going anywhere.”

When he started Gay Good News, Roberts told viewers that he did so partly to cheer himself up and get back in touch with people, after being in quarantine for weeks. He told viewers this month that the new job is coming at a good time for him.

“It’s been a real adventure and a real blessing, because 2020 has not been the greatest year,” he said. “We still have a few months left to turn it around and make it a little better, which I’m very excited to do.”