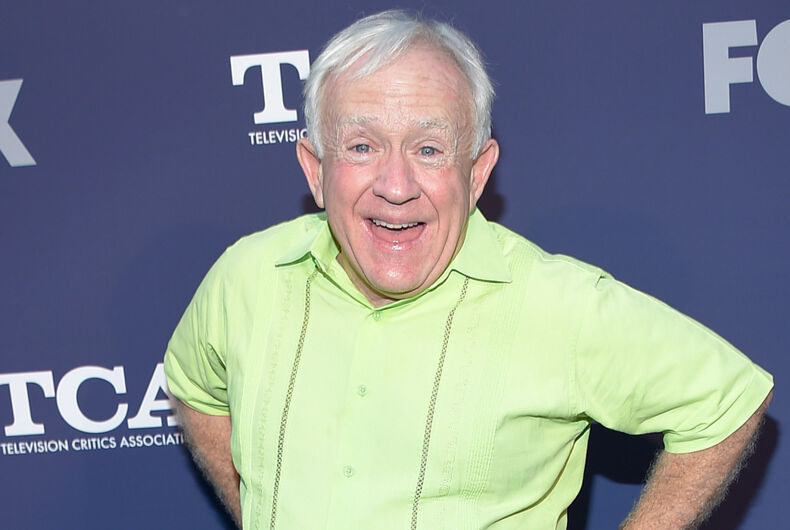 Journalist Thomas Roberts may be openly gay, but he was a straight man last week.

For more than 20 minutes, Roberts set Jordan up for punch line after punch line, as they spilled the tea about Jordan’s new TV show, latest book, and 4.7 million Instagram followers.

Roberts stroked Jordan’s ego by calling him “probably one of the most important people on the planet right now” and “the best thing to come out of COVID,” and asked Jordan what it was like to have so many followers. Jordan said posting videos on Instagram was all new to him, and there were a lot of new terms to learn.

Jordan said he decided to “hunker down” in Chattanooga, Tennessee, during the pandemic, and got a place separate from his mother and twin sisters, at a bed and breakfast nearby. “I couldn’t stay with my Mom,” he said. “You know, you’re 64 and you cannot move back in with your mother.”

Jordan said he would just sit at his bed and breakfast and come up with funny ideas for his Instagram appearances. He said he’s a bit alarmed that people on the internet have found out where he lives and send him things, hoping he’ll show them in one of his videos.

“It’s kind of frightening to me,” he said, “that people can find your address easily.”

Jordan told Roberts that he has been inundated with unsolicited packages. “Boxes of stuff. Boxes of candles and people that have new companies and cast iron skillets. I’ve just got presents stacked everywhere.”

Roberts said the senders want him to talk about what they sent him, like product placement in a movie.

“But I don’t want to do that too much,” Jordan said. “You know, then it becomes something else…That’s not why I started.”

Jordan said he can’t get his 85-year-old mother to go on Instagram, even though he’s begged her. He said she scolds him for using foul language in his one-man shows.

“She saw my show one time and I can get pretty nasty in my show. She said, ‘You weren’t raised that way. You were not raised to talk like that. I don’t know why you think that you have to talk dirty to be funny.’ You know what I say now? It bought you a condo! I bought her and my sisters the most beautiful place in Chattanooga. It’s like Laura Ashley threw up in there.”

Roberts asked Jordan if it’s true, as the internet says, that he’s dating Dylan McDermott, with whom he starred on a season of American Horror Story.

“Kind of,” Jordan said. “We did American Horror 3 together and I was so smitten. I would sit there and try to be cute and say fun things like you would in high school. We just kept it up on the internet. A lot of people don’t know how funny he is. Dylan McDermott is intrinsically one of the funniest people I know, and he’s very smart. We go back and forth but, no, I’m not dating Dylan. I could say that and probably get away with it. He would probably go along with it.”

Roberts said he’s heard that producer Ryan Murphy might be developing a show based on the friendship between Jordan and McDermott and asked whether that’s true.

“He’s supposed to be,” Jordan said. But it will be hard to pull off, Jordan added, because he’s under contract to work on a Fox Broadcasting Co. show, Call Me Kat, in which he plays a “pussy wrangler” at a cat café.

“Fox is so high on it, they bought 13 episodes right off the bat,” he said. “It’s not just a pilot.” As a result, “I’m not available right now” to work with McDermott and Murphy, he explained.  “That doesn’t seem to bother Ryan.”

“He’s got the money to buy you out of that or do whatever he wants,” Roberts said of Murphy.

Roberts was intrigued by the pussy wrangler part. “How does that feel?” he asked. “That’s a big role.”

Jordan said the studio where Call Me Kat will be filmed is near the equestrian center where he’s taking saddle seat equitation lessons, but filming hasn’t started yet.

Back to Instagram fame, he said he feels bad when someone makes a negative comment about him on the internet.

“You know what?  I quit reading” comments, he said “There’ll be 50 million beautiful comments and then somebody will get hateful. This girl said the other day, “Your face looks pinched a lot of times, like you’re trying to do Number Two. I thought, Miss, why would you say that? All day long, I look in the mirror and go, Do I look pinched? What’s pinched mean? You know, one comment.”

“Every other comment will be nice, but all it takes is that one nasty comment,” Roberts agreed. “And where do those people come from that get the nerve to put that out into the universe?”

Jordan said he has received requests from more than 50 different cities to videotape Pride greetings. He said he decided to do one “very generic wonderful Pride message” and send it out to the different cities.

“I didn’t want to sit there and go, Minneapolis! Happy Pride! Kansas City! Happy Pride! I thought I’ll be there all day long. I’m going to do one really, really sweet message and put it out there and then they can put it up however they want. So I did my part.”

Jordan also dished about a new book he’s working on and revealed the possible title: Love Like Leslie.

“I want to write what it’s like to be 65 years old and an internet darling. What my life is like currently, you know what I mean? All that fun stuff.”

Thomas asked Jordan if his life has really changed all that much, since becoming an internet darling.

Jordan said he’s been keeping a daily journal since he was 17.

“I’m like a high school cheerleader stuck in an old man’s body,” he said. “I buy stickers. I decorate… I cannot go to bed at night without doing it. I have journals forever.”

The beauty of writing a book, Jordan said, is that it makes a writer slow down his thinking.

“I like the process. I’m good at it,” he said. “I learned very early, they said, ‘Put pen to paper and it slows the mind down to the speed of a pen. You’ll get clarity.’ And so I write. I write in longhand…All kinds of stuff.”

Why don’t you just publish your diaries? Roberts asked.

The interview with Jordan took up more than two-thirds of Roberts’ 30-minute program, dedicated to “reporting Gay Good News in coordination with Gay Pride during the month of June 2020.”

The show was streamed live from Roberts “in-bedroom studio,” with a shelf full of photos and other mementos in the background.

The funniest part of the show was when Roberts concluded his interview with Jordan, who had been visible on the screen of a laptop computer sitting on a table in Roberts’ bedroom.

When the segment was over, Roberts just sort of pushed the table and computer out of camera range, without turning off the image or audio. Viewers could hear Jordan still cackling in the background, apparently unclear about the proper etiquette for signing off or disconnecting. The problem was solved when Roberts’ husband and production assistant, Patrick Abner, grabbed the laptop out of Roberts’ hands and whisked it away.

When not talking to Jordan, Roberts called Google on his phone, talked about checking out the gay scene in Atlanta the night before, promised to answer questions about what’s on his bedroom shelf, and asked viewers to contribute news about anniversaries or weddings or other events of note. In future shows, he said, he plans to have a joke of the day as well as a guest segment.

Gay Good News can be found on Roberts’ new Facebook page, Thomas Roberts Live at 5. The show will appear three times a week: Monday, Wednesday and Friday at 5 p.m.

Why would progressives mock Boomers when they stand on their shoulders?