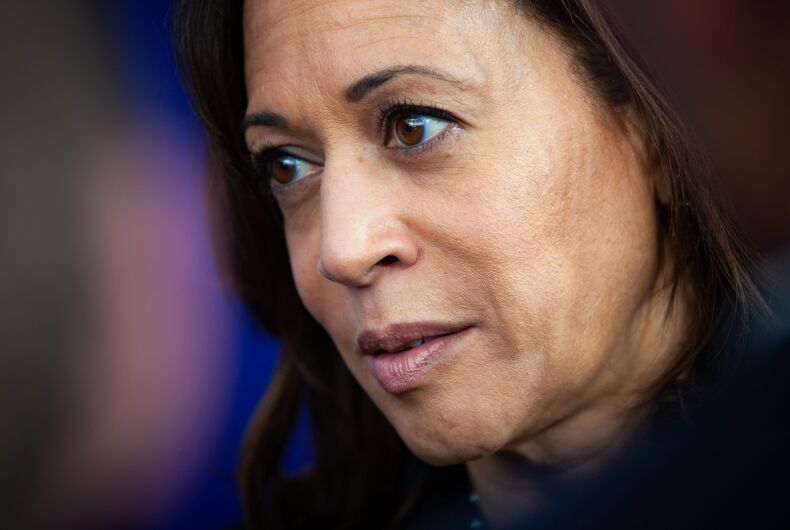 Now that presumptive Democratic presidential nominee Joe Biden has named Sen. Kamala Harris (D-CA) as his running mate, Republicans have been scrambling to find a line of attack against her.

One of the worst that they’re mounting is whether or not she is “legally” Black.

While David Bernstein over at Reason spent time trying to figure out how Harris should classify herself on government documents and the technical guidelines surrounding them, others, like pundits Dinesh D’Souza and Mark Levin, took a simpler route.

They say she isn’t an African American because her father is Jamaican and her mother is Indian. Both her parents immigrated to the United States.

The line is similar to the racist birther attacks lobbed at former President Barack Obama, a Black man whose father is Kenyan. Donald Trump was a staunch proponent of the racist claims that Obama isn’t “American.”

“I’m not going to be a stickler about this,” Levin said on his BlazeTV show, “but the media will insist on it. Kamala Harris is not an African American. She is Indian and Jamaican.”

“African American in the American context generally means having a direct relationship to the experiences of slavery and segregation and Jim Crow so on,” D’Souza said on Fox News. “And the point I’m trying to make is that Kamala Harris seems to be descended less from the legacy of, let’s say, Frederick Douglass, than she is from the legacy of the plantation itself.”

Jamelle Bouie responded to the idea that Jamaicans can’t be Black on Twitter: “How does Mark Levin think Black people got to Jamaica?”

He pointed out that enslaved African people were brought to Jamaica and white slave owners in Jamaica often had children with enslaved Africans, which means that Harris’s ancestry on her father’s side is similar to many Black people’s in the U.S.

“‘Black America’ has always been a diverse collection of backgrounds (descendants of US slaves, free-born and immigrants), admixtures and phenotypes,” he wrote.

Moreover, Harris is “Black in an American context” because of how she gets treated in the U.S. due to her physical appearance, according to Bouie.

During one of the most talked-about moments of the Democratic primary, Harris attacked Biden for his previous opposition to school busing, pointing out that she was part of the second class to integrate a public school after being bused there from her neighborhood.

Even Black conservative gadflies Diamond and Silk got in on the action, flat out asserting that Harris “isn’t Black,” even though she identifies as Black.

“But see you have got to understand something about Kamala Harris,” Silk told a morning talk show host. “Kamala is not even Black. So you know when she talks about racism, that’s why she don’t care about it. She’s not even Black.”

“She claiming now she is Black. Somebody claimed that she was Asian American and then they are saying she’s Indian. I don’t know what she is,” Diamond added.

In early 2019, as she launched her own presidential campaign, Harris responded to the allegations that she’s not “Black enough.”

“So, I was born in Oakland,” she said, laughing with a host of the popular radio show The Breakfast Club, “and raised in the United States except for the years I was in high school and in Montreal, Canada.”

“And, look, this is the same thing they did to Barack. This is not new to us. And so, I think that we know what they’re trying to do. They’re trying to do what’s been happening over the past two years which is powerful voices trying to sow division and hate among us.”

“And so we need to recognize when we’re being played.”

After a quick look at all the various legal definitions, back over at Reason, Bernstein finally concluded that, yes, Kamala Harris is “legally” Black.

“In short, under American law, no one could deny Harris’s right to assert that she is half-Indian and less-than-half of African ancestry, but so long as she considers herself, and is considered by others, to be African American, for legal purposes she is black,” he wrote.

Angèle is the most famous pop star you don’t know. She just came out.