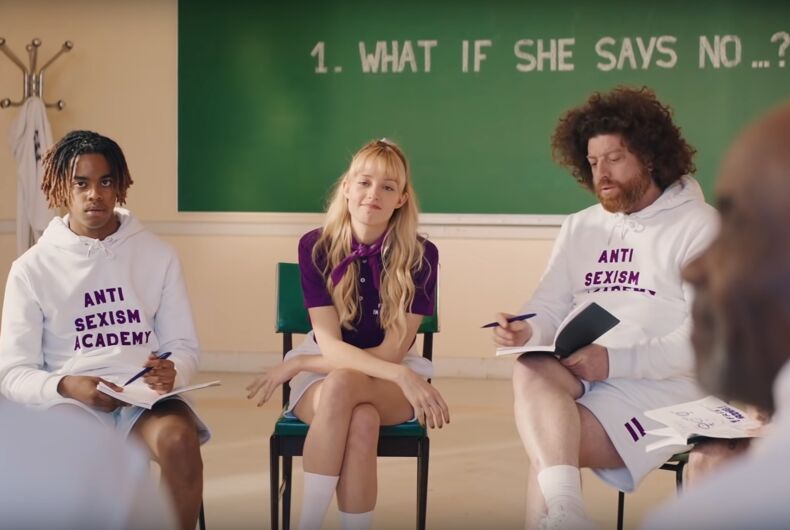 Angèle teaches consent in the middle of a music video.Photo: YouTube screenshot/Angèle

Angèle is one of the biggest pop stars in French-speaking Europe and she just came out on social media, saying that she is in a relationship with a woman.

Known for her feminist lyrics and her gender-creative videos, the Belgian singer posted a picture of herself to Instagram with a T-shirt that said, “PORTRAIT OF WOMEN WHO LOVE WOMEN” and a caption that referenced her relationship with Instagram influencer Marie Papillon.

In 2019, the 24-year-old singer denounced misogyny and sexual assault in her song “Balance ton quoi,” a reference to the French #metoo movement. She even interrupted her own video for a lesson on consent, getting the message out to her her millions of fans.

Her video for “Oui ou non” mocked gender roles in television ads. Angèle appears in drag a few times – complete with a mustache – shoves a tampon up her nose, and burns a Barbie-like doll.

In her Instagram coming out post, the caption said, “At least it’s clear… well, not clear, Marie.” She followed that with a butterfly emoji.

Angèle was making a play on the word “claire” (“clear”), which is spelled the same as the first name Claire. “Papillon” means butterfly in French, so she was referring to her relationship with Marie Papillon.

In the comments, Papillon responded: “She’s a lucky woman, this Claire.”

Republicans are trying to decide whether Kamala Harris is “legally” Black