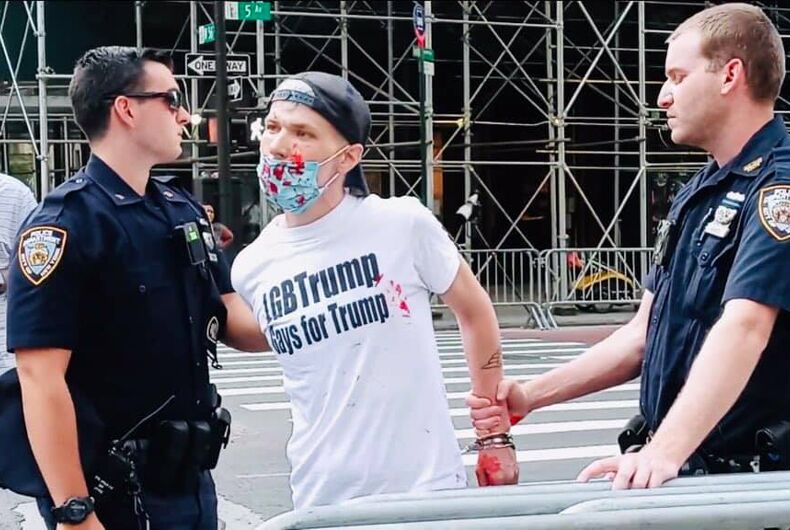 The founder of the Facebook page LGBTrump has been arrested for a second time defacing the Black Lives Matter mural painted on Fifth Avenue in Manhattan.

Footage from the scene shows Mark Hutt slithering around the pavement, spreading white paint over the words painted on the street. The art was commissioned after the murder of George Floyd at the hands of police sparked worldwide protests.

Related: Couple who held guns on Black Lives Matter protestors sued to keep gays out of their neighborhood

Opposing racial justice and denigrating transgender people have become the hallmark of every conservative would-be social media star. Hutt is not an exception.

The Facebook page posted anti-transgender memes as recently as last week in between complaints that the platform was censoring them.

“Saturday, I splashed Red. Sunday, I splashed White. & on Monday…,” Hutt wrote when he posted the latest in a string of videos of his vandalism. “Mayor Bill de Blasio has ruined NYC & has put a target on the back of NYPD’s finest. We need to STAND UP and take our country back. #BlueLivesMatter ”

He has been charged with criminal mischief.

Saturday, I splashed Red.Sunday, I splashed White.& on Monday…. 💙Mayor Mayor Bill de Blasio has ruined NYC & has put a target on the backs of NYPD’s finest. We need to STAND UP and take our country back. #BlueLivesMatter ✊🏼🇺🇸

Another anti-gay Republican opposed to coronavirus prevention measures has COVID