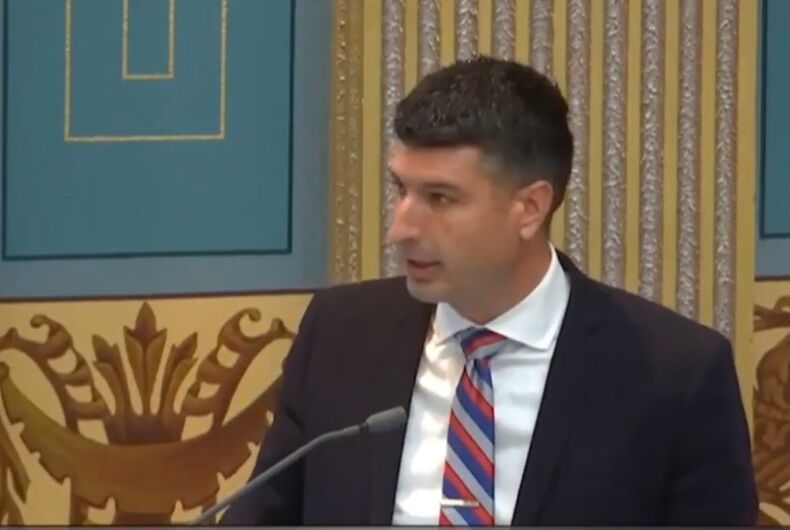 An anti-gay Republican who was critical of his governor’s attempts to minimize the spread of coronavirus pandemic has been diagnosed with the COVID-19 virus.

Michigan Sen. Tom Barrett (R) tested positive this past Friday during a routine test for members of the Michigan Army National Guard.

“Thankfully I do not have any significant symptoms at this time, and I will be self-isolating according to medical guidelines,” Barrett said in a statement. “I have done my best to make contact with those I have been around in the past couple weeks so that they may also seek medical advice.”

In a May 28 speech in the state legislature, Barrett complained about how Michigan Gov. Gretchen Whitmer (D) closed parks to prevent the spread of the pandemic.

“My kids are seven, five, and three years old,” Barrett said in the speech. “They spent Memorial Day weekend running through a lawn sprinkler because our governor has closed down the beaches and the county parks that me and my family enjoy for our recreation.”

Barrett was also the lead sponsor of Senate Bill 858, which would have limited the governor’s power to respond to the pandemic.

She vetoed the bill, saying that it would goes against “the recommendations of public health experts.”

Barrett frequently touts his children and his experiences as a dad, both in the state legislature and on his campaign website.

“As a father of three young children, Tom knows that life is a gift from God to be valued and respected,” the website proclaims to explain why he’s “100% pro-life.”

But he isn’t all that supportive of other people’s families. In 2015, then state Rep. Barrett voted for a bill that allowed adoption and foster parent agencies to refuse LGBTQ parents if the agency claims that same-sex parenting is against their religious beliefs.

The bill also banned local governments from passing rules to protect equal rights for potential LGBTQ parents, and it was signed into law. Years later, the state attorney general nixed the law as part of a settlement for a lawsuit.

In 2017, Barrett also signed a letter opposing LGBTQ job, housing, and public accommodations discrimination protections. The state still does not include gender identity or sexual orientation in its civil rights legislation.