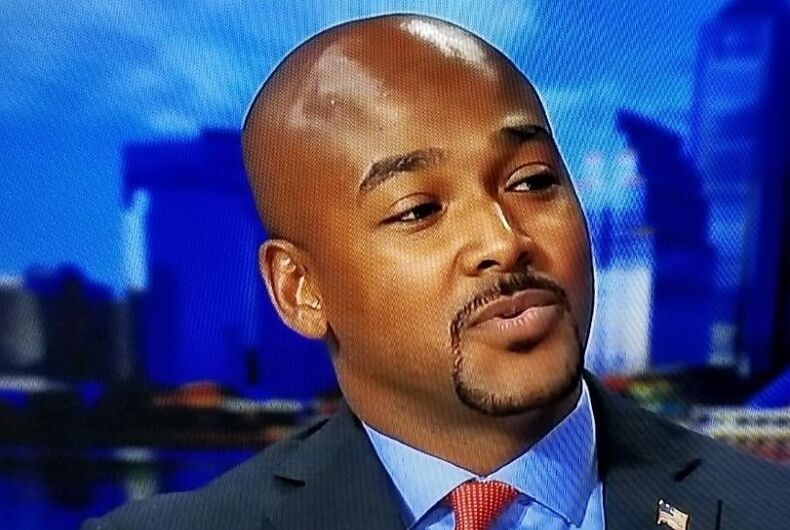 Democrat Albert Chester, a candidate in Florida’s 5th congressional district primary race is drawing fire after numerous anti-LGBTQ posts on social media were unearthed by local progressive activists. The vile tirades included a description of coming out as “confessing and proud (to) stand for unnatural lusts and desires.”

Florida for Bernie, a group of progressive Bernie Sanders supporters, endorsed Chester in the upcoming primary, but has since yanked their support. The advocates who found the posts are members of the organization.

The Facebook posts have been deleted and Chester apologized for the offense, but it was too little, too late.

“My past is not an indication of who I am today,” Chester said. “Since that time, I have become more knowledgeable about the issues you face. I am fully committed to an inclusive platform that promotes gender equality and strengthens human rights.”

The posts particularly took exception to LGBTQ people who are out and proud.

“I’m starting not to be an Obama supporter any more (this country has faaaar more important things to worry about than people ‘coming out of the closet’),” he wrote in 2013 over a meme meant to “defend” Christians.

“Coming out is not a major step in this country. Sorry no parade or party needed… ur business is your business.”

“Wow Satan is busy,” he continued. “Christians lets strap up for battle.”

In the comments to the post he said “Lucifer” was behind the push for LGBTQ rights.

In another post, Chester excused discrimination against an NFL player who came out.

“Bottom line what in the hell do [you] expect to receive for announcing you a man that like men? These parades, flags and all this bull….”

As part of his apology, Chester noted he had met with local LGBTQ activists to attempt to clear the air. He also reiterated that while he had condoned anti-gay discrimination previously.

“I am fully committed to an inclusive platform that promotes gender equality and strengthens human rights. I ask you to accept my apology and I look forward to working with you and for you.”

“I have made it clear that I support the Equality Act and other federal protections for our LGBTQ+ brothers and sisters,” he told Florida Politics after issuing the apology. “As the sole Progressive in this race fighting for Medicare For All, a Green New Deal, canceling student debt and more, I say unequivocally that I will fight endlessly for equality for all, particularly the LGBTQ+ community.”

“While Dr. Chester continues to claim he is the ‘only’ progressive in this race, we do not feel that this reflects well on our movement,” Florida for Bernie shot back when they yanked the endorsement.

Our members statewide have overwhelmingly voted to rescind our endorsement of Dr. Albert Chester, Candidate for the 5th…