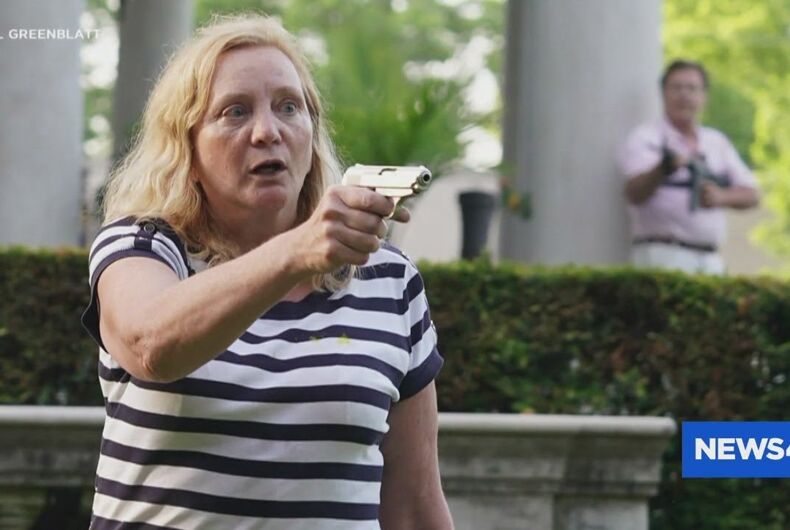 Patricia McCloskey holds a gun on a group of protestors passing by her homePhoto: Screenshot

The white couple who became national pariahs after brandishing guns at peaceful protestors walking past their home in St. Louis, Missouri last month has a sordid history that includes suing their home association for allowing gay couples to live in the gated community.

Personal injury lawyers Mark and Patricia McCloskey love to use the court system as a tool for intimidation, according to a recent exposé by the St. Louis Post-Dispatch, and have filed numerous lawsuits over the years. Mark McCloskey sued his father and sister multiple times and the two used the law to gain possession of the home.

Described as “almost always in conflict with others,” the couple sued the neighborhood trustees for not enforcing the written rules for living in the gated community. One of those required “single family” residences.

The McCloskeys, according to neighbors, didn’t want gay couples living in the area. Mark McCloskey insisted it wasn’t anti-gay because straight unmarried couples would also be banned, but same-sex marriage was still illegal in Missouri at the time.

“Certain people on Portland Place, for political reasons, wanted to make it a gay issue,” he said.

Patricia McCloskey was impeached as a trustee in 1992 when she opposed changing the measure. Former neighbors and trustees gave her the boot over her blatant homophobia.

Among a litany of lawsuits, the article also gives one more detail that shines a light on the type of people they are.

In 2013, he destroyed the Jewish Central Reform Congregation’s honeybee hives that were just outside of his mansion’s walls and left a note claiming responsibility and threatening legal action if the temple didn’t clean up the mess quickly. The congregation had planned to harvest the honey and pick apples on the property for Rosh Hashanah as part of a school project.

“The children were crying in school,” Rabbi Susan Talve said. “It was part of our curriculum.”