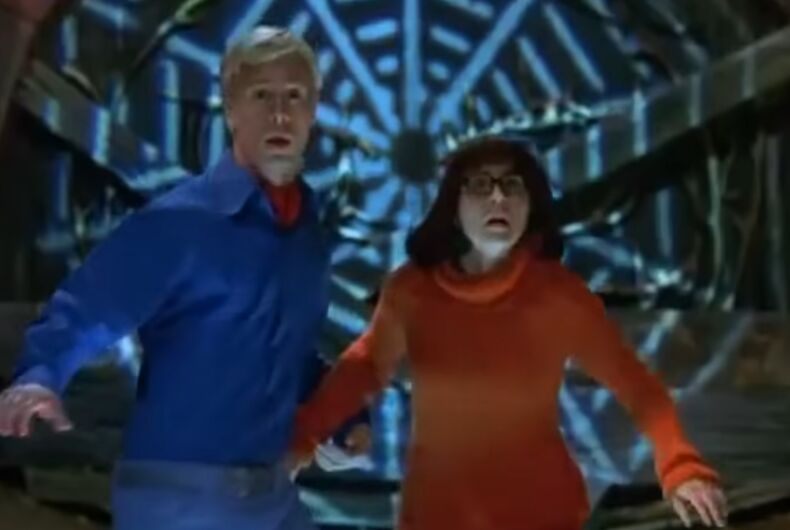 Freddie Prinze Jr. as Fred and Linda Cardellini as Velma in the trailer for "Scooby Doo."Photo: Screenshot/YouTube

The writer behind the 2002 Scooby-Doo film said that he tried to make the character Velma Dinkley a lesbian, but the studio rejected it and made her straight.

Screenplay writer James Gunn tweeted the Velma was “explicitly gay” in the script he wrote.

“But the studio just kept watering it down & watering it down, becoming ambiguous (the version shot), then nothing (the released version) & finally having a boyfriend (the sequel),” he wrote.

I tried! In 2001 Velma was explicitly gay in my initial script. But the studio just kept watering it down & watering it down, becoming ambiguous (the version shot), then nothing (the released version) & finally having a boyfriend (the sequel). 😐 https://t.co/Pxho6Ju1oQ

The 2001 film takes place several years after the cartoons. The gang has broken up and pursued careers and love interests separately, and Shaggy even has a girlfriend in the film.

“I had written an edgier film geared toward older kids and adults, and the studio ended pushing it into a clean-cut children’s film,” he said in a 2017 interview. “And, yes, the rumors are true: the first cut was rated R by the MPAA, and the female stars’ cleavage was CGI’d away so as not to offend.”