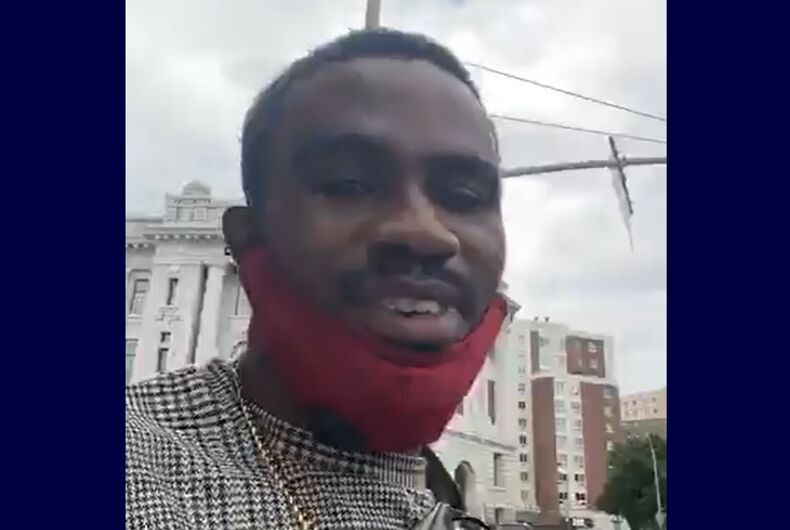 Two men allegedly pulled knives on a gay couple and called them anti-gay slurs while trying to rob them, but they instead ended up on the ground, restrained until police arrived.

Kelson Akomolafe, 27, said that he and his partner Edward Hoard, 30, were attacked in the Bronx last week on July 7.

“I was going to this clinic right here with my partner and then boom, all of this happened,” Akomolafe said in a Facebook Live video, according to Gay City News.

He said that two men approached them and one of them was shouting.

“We just came out of the street and this guy starts saying something like, ‘Ooh, we know you’re gay,'” he said, adding that the attacker called him and his partner “fa***ts” and “batty men.”

He said that he and his partner didn’t recognize the attacker, so they tried to walk away.

“All of a sudden… the guy pulled up a knife trying to rob me of my bag… so I put him on the ground,” he said.

He explained that one of the men tried to get his bag while the other pulled a knife.

“Nobody, not even in my home country, has ever walked up to me and said that,” Akomolafe told the New York Daily News. He’s from Nigeria, where homosexuality is illegal and can be punished with the death penalty.

“Now I’m going to rob you two fa***ts!” the attacker allegedly said. Akomolafe had a Louis Vuitton bag and both of the men in the gay couple had gold chains, and the attackers went for the bag.

Akomolafe said that the fought the man with the knife.

“My only focus was on his knife,” he said. During the ensuing struggle, he was slashed in the face and hand, but he was eventually able to restrain the attacker until police arrived.

And the police put the attackers and Akomolafe in handcuffs.

“I was detained for the first time in my life,” he said. “I was just lucky not to be shedding tears. After all of this, how can I have handcuffs on my hands? The procedure was overwhelming.”

He was later released after being held for hours at a police station.

The attackers were identified as Ricky Bellevue, 35, and Trevel Parrish, 28. This past June, Bellevue was held in a chokehold by NYPD Officer David Afanador, in violation of the state’s ban on chokeholds, in a video that went viral.

Bellevue’s lawyer said at the time that he was held in a chokehold until he passed out and had to be hospitalized and examined for possible brain damage. Bellevue’s family said that he has a history of mental health problems.

Bellevue and Parrish are now facing charges of menacing; criminal possession of a weapon; and robbery, assault, and harassment as hate crimes.

Akomolfe said that he left Nigeria so that he could live openly as a gay man, not to be attacked by someone he “had never seen… before in my life.”

“This is why I came to America, where I can express myself and my sexuality, and show who I am when I walk down the street, ” he said.

Transgender child actor appears on “The Baby-Sitters Club” on Netflix