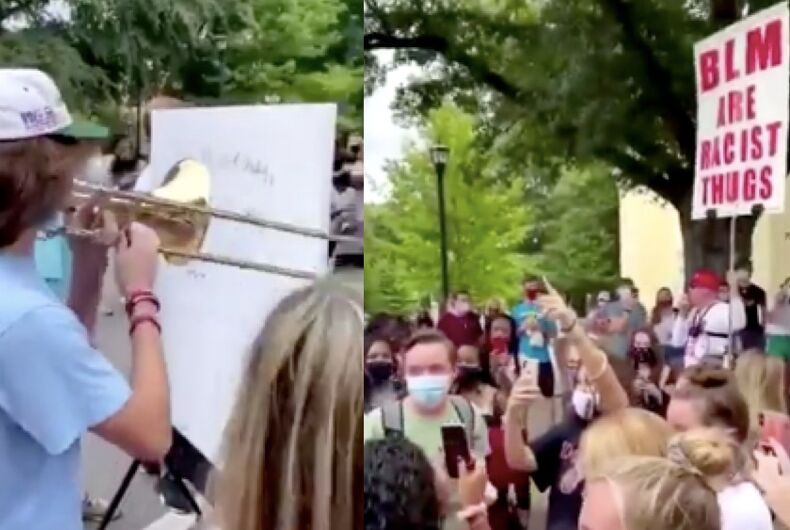 Trey Hogan, a freshman at the University of South Carolina who is a member of the school’s band, achieved online fame this week after using his trombone to silence the hate speech of a racist and homophobic demonstrator on campus.

His musical intervention earned him the applause of classmates, a local pizzeria, and national media.

The demonstrator, who wore Trump’s trademark “Make America Great Again” hat while standing under a sign that said “[Black Lives Matter] are racist garbage,” used his megaphone to shout racist and anti-LGBTQ slurs at students.

Hogan began playing his trombone whenever the demonstrator tried to speak, much to the appreciative cheers and applause of his nearby classmates. One junior, Sawyer McDuffie, caught Hogan’s actions on video. McDuffie’s TikTok video of the showdown has since been viewed over 2.3 million times.

Our students were not here to play today 😌 pic.twitter.com/aN5U8N4vTg

Hogan used his trombone to interrupt the man’s message of hate for nearly two hours until the battery in the demonstrator’s megaphone died. His feat earned him the nicknames “Trombone Guy” and “Trombro.”

“He was saying some pretty hateful stuff, and I just didn’t agree with any of it,” Hogan told WLTX News, adding elsewhere, “We support everyone here. It’s just not okay, and we don’t want that on this campus.”

In a tweet attached to the video of Hogan drowning out the demonstrator,  Bob Caslen, President of the University of South Carolina commended Hogan and the other students, writing, “The demonstrator on Greene St. today may have a constitutional right to be there & say what he wants, but his words do not reflect the values & principles of our university. I applaud our @UofSC students who peacefully voiced their opposition to the hate he was spewing.”

Hogan said the owner of a local pizzeria, Village Idiot Pizza, offered him free pizza until he graduates. His story has also been shared on ABC World News Now, Gayle King on CBS This Morning and numerous national news websites, earning him messages of support from lovers of equality and aspiring trombone players.