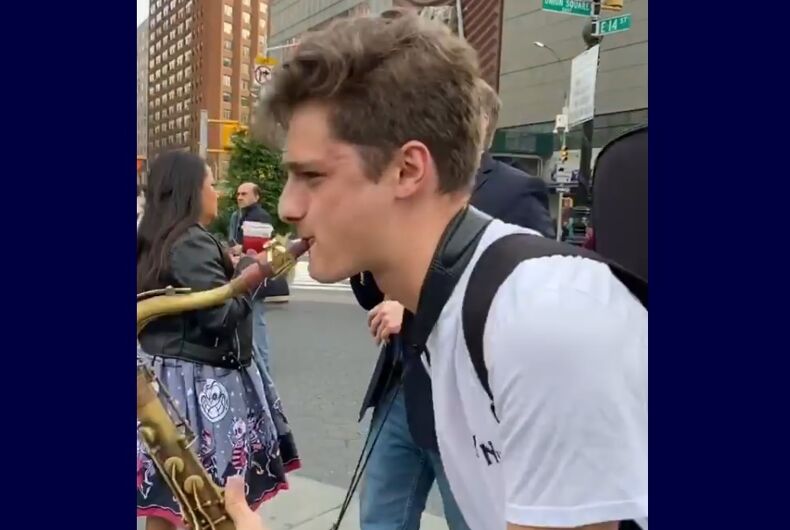 Student Augie Bello on a bicycle as a hate preacher tries to condemn gays to hell.Photo: Screenshot/Instagram

A couple of performers in New York City drowned out a hateful street preacher with a saxophone.

The preacher was speaking at Union Square Park last Friday. “The homosexual community has the highest suicide rate of any group,” he can be heard saying in a video that was posted to Instagram.

Some musicians were playing nearby, and they decided to move a little closer when they heard what he was saying.

Filmmaker Nicolas Heller happened to be passing by and he caught the music on camera.

“I was running late to a meeting when I was passing through, so I only had two minutes to see what was up,” he told Queerty.

Heller identified the musicians as Julian Roel and Augie Bello, music students at the New School in Manhattan.

“This strapping young gent (who clearly gets laid regularly),” he wrote on Instagram, “is preaching that the LGBTQ community is going to burn in hell, so street musicians @augie_bello and @roel.julian offer some foreground instrumentals.”

This strapping young gent (who clearly gets laid regularly) is preaching that the LGBTQ community is going to burn in hell, so street musicians @augie_bello and @roel.julian offer some foreground instrumentals. (Guest appearance by @arnold_daniel)