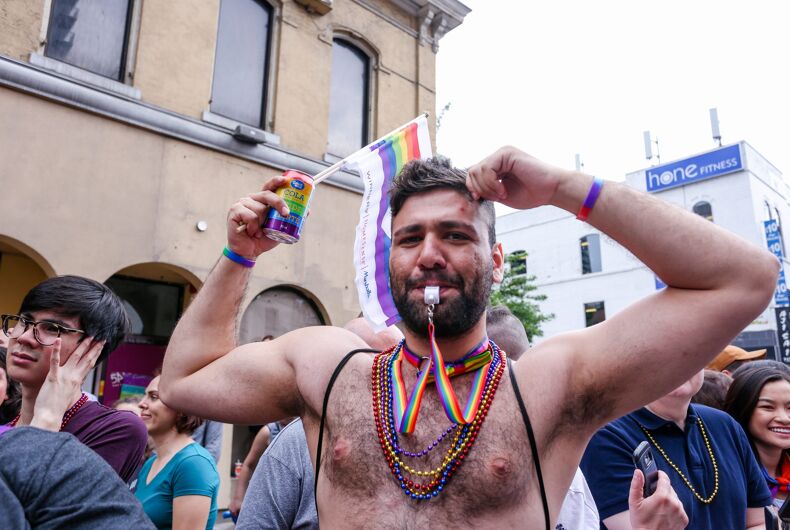 Add John Waters to the camp of people who don’t think they can.

Related: You have to see John Waters’ badass Christmas card

It’s one of many subjects the filmmaker, writer, and gay icon has been pondering while in quarantine because of the COVID-19 pandemic.

Waters said he recently read British author Julian Barnes’ latest book, The Man in the Red Coat, a biography about surgeon and sex addict Samuel Jean Pozzi and life in England and France during the Belle Epoque. He said he was surprised to read that people back then supposedly judged others based on whether they could whistle.

“There was a thing in the Oscar Wilde days that people believed that gay people couldn’t whistle,” Waters said. “And it’s true. Gay people can’t whistle. I’ve asked every gay person I know and they can’t.”

In The Man with the Golden Gun, published in 1965, James Bond author Ian Fleming promoted the theory that a man who can’t whistle has homosexual tendencies. Others believe the giveaway is silent farts.

Waters says Barnes’ account of the whistling test for sexual orientation was a revelation to him.

“When I read it, I thought: I never heard that one before,” he said. “You know what I mean? That’s how you can always tell. Ask a man whether he can whistle or not…I’m sure there are violations of that rule, but I just found that the most hilarious detail in the book that I really, really loved hearing.”

Now that he’s up to speed on whistling, Waters is focusing on a different book. He just embarked on a virtual tour to promote the paperback version of his own book of essays, Mr. Know it All: The Tarnished Wisdom of a Filth Elder.

The book was supposed to come out in paperback last May and Waters had a series of book talks lined up, but that got delayed because of the pandemic. Now he’s on a virtual tour sponsored by different booksellers around the country, with readers signing on via Zoom. The first talk was an online conversation this week with director Jim Jarmusch, organized by Community Bookstore and the Murmrr Theatre in Brooklyn, New York.

Published by Farrar, Straus and Giroux and selling for $18 in paperback and $27 in hardcover, Mr. Know It All is part advice book for budding filmmakers and part memoir, with plenty of stories about celebrities he’s worked with along the way. In his talks, too, Waters touches on a wide range of subjects.

For those following the British court battle between former spouses Johnny Depp and Amber Heard, he’s Team Johnny all the way.

“All I can say is I took drugs with him and I drank with him and he was always lovely,” Waters told Jarmusch.

In recent weeks, Depp, 57, and Heard, 34, have been trading accusations against each other in court testimony prompted by a libel lawsuit that Depp filed against The Sun newspaper after a headline referred to him as a “wife beater.”

Heard had alleged that Depp was abusive to her during their marriage, from 2015 to 2017. To clear his name, Depp admitted to doing drugs during their time together but said he never hit her. There was testimony about pee on the floor, poop in their bed, and Depp severing his finger. A judge hasn’t ruled in the case. Depp is also suing Heard in the U. S.

Waters knows Depp after casting him as the lead in Cry-Baby, his Hairspray followup movie about a juvenile delinquent and gang leader who can cry a single tear and falls in love with a “square” in 1950s Baltimore. It’s now marking its 30th anniversary, and Waters wrote a chapter about it, and Depp’s key role in getting it made.

“It was the first time I had a Hollywood budget,” Waters told Jarmusch in the online conversation. Depp had become a teen idol starring in the television series 21 Jump Street, he wrote in Mr. Know It All, but was looking to change his image by making fun of his “dreamboat” status in Cry-Baby.

“He got a million dollars to make Cry-Baby and he kept looking at me: You got me a million dollars? How could that have happened?” Waters told Jarmusch. “He was such a team player and he’s so great in the movie, I think. He’s just wonderful in it.”

Depp’s decision to play teen rebel Wade Walker is what clinched the deal, Waters said. “I thank him to this day for getting that movie made,” Waters said. “Because if he hadn’t said yes, it would have never been made.”

Brad Pitt, by contrast, is the one who got away. Waters said a young Pitt auditioned to play Depp’s sidekick in the movie but didn’t get the role. Waters defends his decision.

“At the time he was a complete unknown,” Waters said. “No one knew who he was. And he came in and we all went…the sidekick can’t be that handsome…So I’m probably the only person that ever said no to Brad Pitt.”

Waters said he’s seen Pitt since then and is a big fan.

“The few times I’ve seen him afterwards, at the [Film Independent] Spirit Awards and everything, he’s been absolutely lovely,” Waters said. “And I certainly didn’t hurt his career by turning him down there. What a great career he’s had. He handles being famous really well, I think. I mean he drives around in a rent-a-car in L.A. No one thinks it’s him. Don’t go out with 20 bodyguards. Then people know you’re famous. I just think he handles his career, movie stardom, being a good actor, directing and being famous really, really well.”

“We got along,” Waters said. “I mean, we would come into a restaurant with all those people and people would run. No one asked for autographs when they saw that pack coming. They were so confused by that mix. I think we all look back on that and it was a really wonderful time making that movie.”

Besides Pitt, there were two other big names who auditioned for Cry-Baby but didn’t get hired. One was Cyd Charisse, a dancer and actress popular in the 1950s, reading for the hillbilly part that eventually went to Susan Tyrell.

“I thought, Cyd Charisse, playing a hillbilly in Baltimore? It just didn’t seem right,” Waters said. “She was lovely. She had no idea who I was or anything. The agent brought her in, trying to reinvent her. That was beyond my reinvention. Cyd Charisse to Susan Tyrell. She was dressed for the Oscars. She was lovely. She had absolutely no idea who we were and she would have freaked out if she had ever been cast in it and showed up in that cast.”

Carol Channing also auditioned for the part that Tyrell got. “Carol Channing came in and for some reason said she wanted to play the part as an American Indian,” Waters said. “Why? I have no idea.”

Waters said canceled bookings have been the story of his life this year (although he did give a virtual commencement address for graduates of the School of Visual Arts in New York City.)

“I just lost…36 speaking engagements over the next year,” he lamented. “Is it ever going to come back? That’s the weird thing. That was very much what I did for a living, constantly writing new material and meeting people all over the world doing it.

“You know I have the John Waters Camp. I have Burger Boogaloo, which was the big punk rock festival I hosted every year. I have the John Waters Christmas. So it is a thing that I hope is going to come back. But certainly [it’s] a great shock that that world has suddenly come to a standstill, because it’s hard to imagine people going into a crowded theater to do anything.”

In his talk with Jarmusch, Waters explained the difference between teabagging in the U. S. and teabagging in England. “I did not invent it, but I certainly took it to a wider audience,” he quipped.

He reminisced about meeting Andy Warhol and talked about how Warhol and Marcel Duchamp influenced his career.  He hinted that the soundtrack to Polyester may be released on vinyl.

“I would like it to be released in any way,” he said. “It hasn’t yet, but there certainly is talk about that right now. And the person that’s doing it has found alternative tapes, long versions of different things, and I think they were going to put it on an album with the music from Desperate Living that has also never been put out before. So I hope that happens, certainly, and it would definitely be on vinyl, I would think.

Waters said he said he hopes that Charles Manson family member and convicted murderer Leslie Van Houten finally gets parole, after nearly 50 years in prison.  He said the state’s parole board has voted for parole three times before, but the governor has always denied it.

Waters said the board granted parole again this summer, saying “very, very forcefully…that after 50 years, she is ready to be paroled, which I do agree with.” Now it’s up to California’s governor, Waters said. “I hope that he has the courage.”

Waters marvels at the enduring nature of the phone scene from Serial Mom, in which Kathleen Turner makes a prank call to Mink Stole, asking for the “Cocksucker Residence.” He wrote in Mr. Know It All that he once called the singer Boy George, and Boy George’s phone was answered by Turner’s voice from the prank call.

“Somebody sent me a picture this week of a homeless encampment in the woods somewhere, and it had a big thing scrawled on graffiti: The Cocksucker Residence,” Waters said. “I thought, well, there’s a homeless commune I can’t imagine. But you never know where things end up, you know, something, a line from a movie.  I saw a girl once that had a page of a script from Female Trouble tattooed on her leg. I thought, Wow that’s really a tribute.”

He talked about getting mistaken for other people at airports, including the actor Steve Buscemi. “On airplanes, flight attendants say to me, You were good in Fargo.” Waters said. “I told Steve that and he said, ‘They think I’m Don Knotts.’ Either way.”

Another time, Waters said, “I had a flight attendant say to me, ‘I know who you are.’ And I thought, Oh, what’s this? ‘You’re Ed Wood.’ I thought, Wow. I got confused because Johnny Depp was in my movie and Johnny Depp played Ed Wood. But that was a new one. He’s been dead quite some time.”

Waters repeated his observation that sex is different because of the pandemic.

“When I started, people had sex with different people every single night of the week,” he said. “And now you need 12 lawyers to ask someone for a date.”

While waiting for the time when it’s safe again for in-person events, Waters said he’s encouraged that drive-in theaters are making something of a comeback. He presented two movies at the Provincetown International Film Festival this summer, in compliance with social distancing rules, at the Wellfleet Drive-In on Cape Cod.

“Recently, Polyester played in a pop-up drive-in, probably illegally, in a parking lot of a gay bar,” he said. “They set up a drive-in. Show the movie, serve liquor, and then run. I think that’s so great. That’s really my idea of underground cinema.”

#beautifullybisexual is trending on Twitter & the tweets are, well… beautiful

Ellen doesn’t have to be nice to you. She’s not your mom.