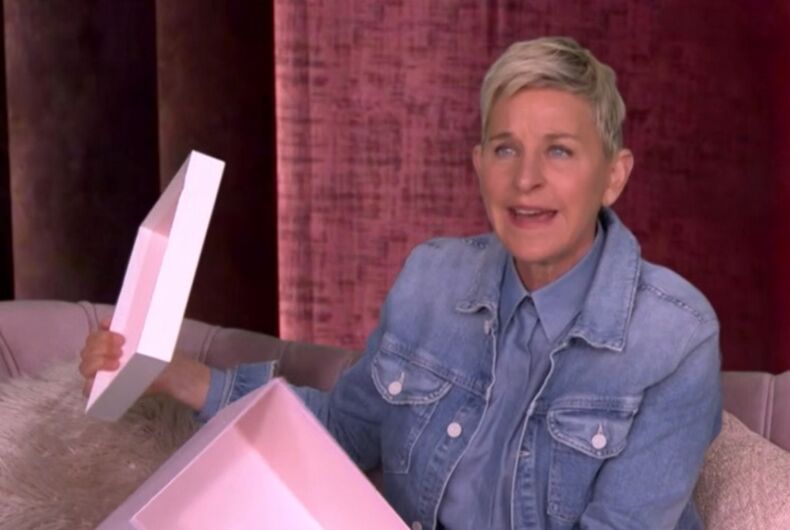 Ellen DeGeneres is without a doubt the celebrity who had done the most, ever, to advance the fair treatment of the LGBTQ community. She’s also one of the most successful women in Hollywood. But this year a bunch of mediocre people have been trying to get her canceled for the crime of being a woman who is not nice enough.

So many accusations have been lobbed against her. About 90% of them are silly and 10% are serious. While the serious ones are serious… they aren’t even about her. They’re about powerful producers and managers in Hollywood who work on the show that bears her name.

There are so many awful things happening in the world, perpetrated by terrible and powerful people, and the internet mob is trying to cancel… Ellen? Seriously?

I’m asking because everyone remembers that she was already canceled once, right? And not “Oh no, people are criticizing me on Twitter while I continue to rake in millions” canceled, à la J.K. Rowling.

No, Ellen was actually canceled in 1997 when she came out as gay. Christian activists said she was a danger to the country and the mainstream media gave them the attention and platform they needed to spread their hateful message. Her sitcom was taken off the air. People who she thought were loyal friends abandoned her. She got death threats and bomb threats and was harassed and told she was going to hell while those same people made her life hell.

She was canceled canceled.

She came out at a time when most Americans believed same-sex relationships were immoral. When homosexuality was still illegal in large swaths of the country. When no nation, not even the Netherlands, allowed two ladies or two dudes to get married. And years after she came out, Mike Pence would run for Congress on a platform that included federal funds for conversion therapy.

Ellen DeGeneres? More like Ellen DeChrist. She sacrificed her career so that tens of millions of LGBTQ people could live better lives.

She was the star of a family-friendly (and hilarious) sitcom. She was in one of the worst parts of showbiz for queer people and she came out well before it was safe to do so.

How many celebrities, athletes, and politicians have lived their lives as gay while the media kept their “open secret”? How many came out when they were either safely retired or had already faded into obscurity?

Ellen could have done the same. But she didn’t, because that’s not her style.

Then she made a comeback, rising like a phoenix when most other people would have taken up work out of the public spotlight.

She started her talk show in 2003 and refused to hide her sexual orientation. She put Portia front and center, never hiding their relationship. She frequently interviewed LGBTQ celebrities and everyday people, introducing tens of millions of Americans to us. She even gave big platforms to LGBTQ people like Wanda Sykes, Adam Rippon, and Sean Hayes as she repeatedly had them on her show and encouraged them to guest host.

It was never just about her, it was always about us.

Since her show started, same-sex marriage was legalized in several states and then nationally. More states banned conversion therapy, passed LGBTQ hate crimes laws, banned discrimination against our community, and banned the gay and trans panic defenses. Public opinion moved immensely in our favor from 2003 to today.

She’s not responsible for all that progress. But if I could see an alternate timeline in which Ellen became an accountant instead of a comedian back in the 80s, I wouldn’t be surprised if we were still fighting for same-sex marriage today.

Is that so unthinkable? Supreme Court justices watch Ellen too, and even if they don’t they probably have people in their lives who do. That’s the power of the media.

Now we’re going to give that up, over what, some accusations that she’s not nice? Her bad publicity this year started with that infamous Twitter thread from Kevin Porter (a man, because of course), who asked people for “the most insane stories you’ve heard about Ellen being mean.”

He got a lot of responses, many obviously fake, all unverified. They included people saying she passed them in the hall without saying “hello.”

But the point was what, exactly? That a powerful woman with an amazing career isn’t always nice? That she works a lot and she has a job to do and she isn’t going to greet every person out there?

She’s not your mom, Kevin, she doesn’t have to be nice to you.

Then Dutch beauty YouTuber Nikkie Tutorials was a guest on Ellen’s show and later accused Ellen of – and you all might have to brace yourselves for this – not giving her a private bathroom and making her use the same restroom as the rabble who work on the show. The Jonas Brothers, who were on the same episode, got their own private bathroom, so Ellen’s mean!

What Ms. Tutorials apparently doesn’t understand is that she is “YouTube famous,” while the Jonas Brothers are – and I think this is the technical expression – “actually famous.”

More people accused Ellen of not saying hello to them for a few more months, until Buzzfeed News came out with some serious allegations, including racism, sexual harassment, and general toxicity. And they’re serious, unlike the YouTuber’s accusations.

But there’s just one thing: they’re against people who work on Ellen’s show. Not Ellen herself.

In fact, one of the stories said that employees don’t believe Ellen knew what was going on because producers would act totally different around her, saying that they put on a show “behind the show” for her.

And of course they did. They knew Ellen wouldn’t stand for it. If a producer got handsy with a staffer in front of Ellen, he’d be gone.

These people who worked closely with Ellen, who know her better than any of us here do, knew that they had to behave in front of her and lie to her about what was going on. She wasn’t the Head Bro in the Ol’ Boys Club making toxic jokes along with them, and everyone around her knew it.

Moreover, she even apologized for the things she didn’t do – just as our culture expects of women – and is helping with the investigation into the allegations. She is doing what she needs to do as the boss now that she knows what’s happening.

This is exactly what she should be doing, right? And who better than Ellen to ensure that people are fired and changes are implemented? Not only is she a survivor of sexual assault herself as well as someone who has faced tremendous discrimination, but she already has a reputation of not putting up with this sort of behavior.

Instead of accepting her apology, though, people who haven’t done a fraction of the good she does every day are giving her more and more grief, just because she didn’t manage to solve sexism in Hollywood all by herself.

Josh Milton of the website Pink News has written a list of “8 iconic lesbians we want to see replace Ellen DeGeneres,” because of course it’s OK to take away 17 years of work from a woman and give it to someone else. Because she has no value.

Of course Milton tells Ellen to smile more right in the second paragraph.

And of course all lesbians are interchangeable. The list laughably includes actress Ellen Page, who would make a hilarious-for-all-the-wrong-reasons daytime talk show host. She’d probably greet every guest by looking them right in the eye and saying something severely sad, like “There’s no proof that you can’t get coronavirus multiple times, so we should be worried that everyone will get it over and over until all of humanity is dead.” DJ tWitch would then play a “sad trombone” and Page and the guest would stare at each other awkwardly for five minutes.

No thanks, I’ll stick with the real Ellen.

Leave Ellen alone. It’s a blessing to be queer and alive in a world that wants us dead, and it’s a miracle that Ellen is where she is today. Let her take care of business, as she’s done her whole life.

Can gay people whistle? John Waters doesn’t think they can.