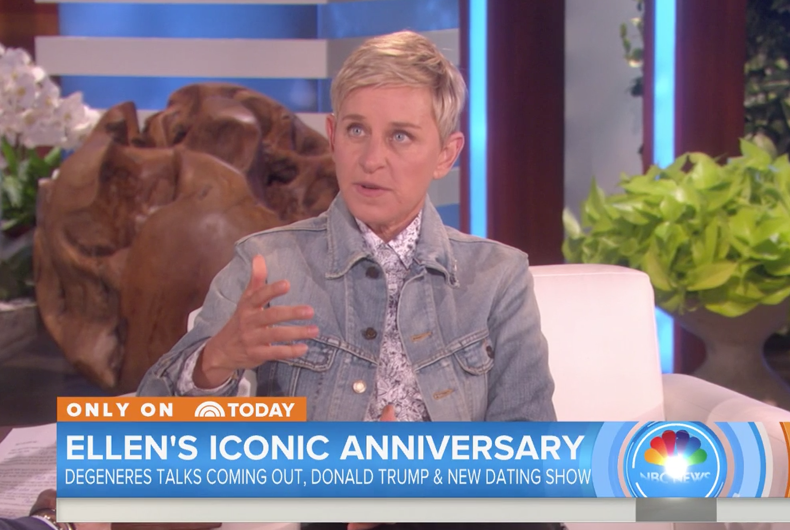 The Today Show‘s Matt Lauer recently paid a visit to The Ellen Show, and while he was there, he turned the tables and put Ellen in the hot seat.

They started out by talking about Ellen’s big anniversary — 20 years since she came out as a lesbian on her TV show and in real life.

“I was anticipating it being a charged episode, which it was because I was making a big decision to come out and be honest, to stop hiding something that I’d kept secret for so long. it was a big deal,” she recalled. “I look back on it now and think, I wish I would have done it sooner. I wish I hadn’t waited so long, but it was what it was.”

That’s not to say it was easy. But looking back, Ellen said it was the best thing to ever happen to her. And she still has the letters she received from fans whose lives she touched.

“I got letters from people that we’re going to take their lives and did not, because of what I did,” Ellen said.

But it wasn’t all sunshine and rainbows.

“I got death threats, and that was negative,” she said with a laugh.

But there’s one negative that Ellen isn’t laughing off: Donald Trump.

Though she met the reality TV producer-turned-president during his Celebrity Apprentice days, when Matt asked Ellen if she wanted to have Trump on the show, she didn’t mince words.

“No,” she said plainly, eliciting laughter and applause from the audience.

“Because I’m not going to change his mind. He’s against everything I stand for,” she explained. “We need to look at someone else who looks different than us, and believes in something that we don’t believe in and still accept them and still let them have their rights.”

Ellen has welcomed a broad range of guests on her show — including former Republican President George W. Bush — but it sounds like Trump won’t be getting an invitation any time soon.