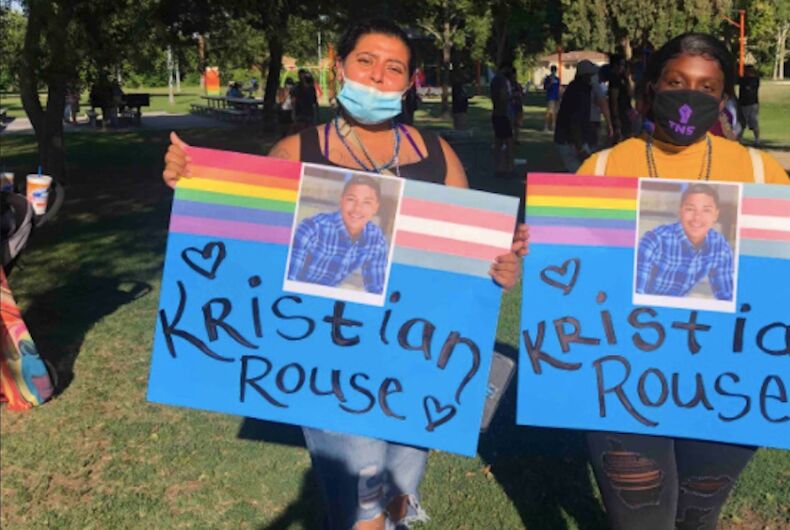 An 18-year-old transgender man, Kristian Rouse, was brutally attacked in Bakersfield, California. The attack hospitalized him for a month afterward. Thus far, police haven’t mentioned any suspects or made any arrests.

According to Rouse’s mother, Euryduce Darrington, Rouse used to call to check in with her every day. One day he didn’t call, so Darrington and her son’s ex-girlfriend went to his apartment to see if he was okay.

Related: Transgender woman was “karate chopped” by drunks for using the women’s bathroom

The pair couldn’t get inside the apartment, so Rouse’s ex climbed onto his balcony and saw Rouse lying on the floor through the window.

“My child was laying on the floor,” said Darrington. “He could barely speak, barely breathe. He had marks around his neck, his face was swollen, he had bruises on his torso and his back and his shirt was off. He’s transgender and that is not a nice thing to do.”

Rouse ended up hospitalized on a ventilator for four weeks. Though he has since been admitted to a long-term acute care hospital in Covina, he still can’t fully use his right arm or leg, and he’s unable to talk because of scar tissue in his throat.

According to the GoFundMe set up to cover his hospitalization costs, Rouse has undergone a tracheotomy and will need surgery to remove the aforementioned scar tissue. He is a high school student who was set to graduate this year. The GoFundMe has raised over double its initial goal of $25,000.

“Kristian so appreciates the love and support that he is receiving and so do I,” Darrington wrote on his GoFundMe campaign. “Kristian is my sweet and precious baby boy and this ordeal has been a terrible nightmare for both of us. Kristian is a warrior and he is fighting every day to get better. He has an EXTREMELY tough and VERY long road to recovery ahead. Please continue to send positive energy and love for him and this Mommy whose heart is shattered in a million pieces.”

Here is a video of Rouse re-learning how to walk following his attack:

Black trans woman character in “Bob’s Burger” is played by a white man. That will change.