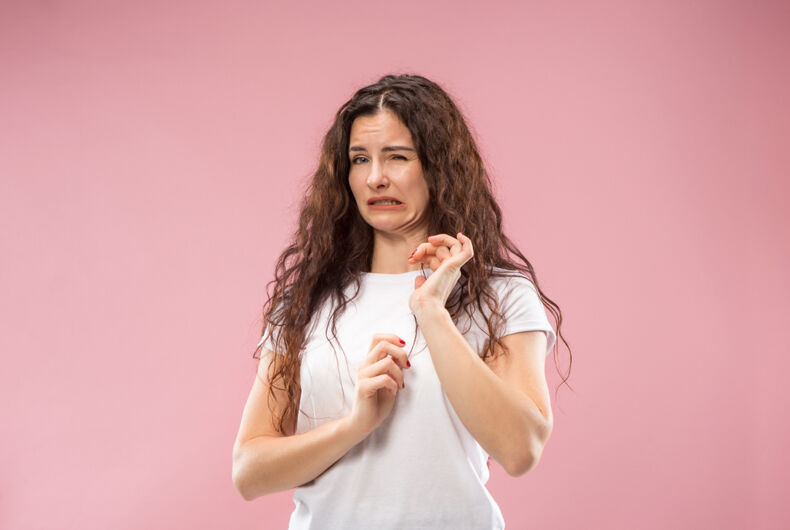 The legislative council of the small town Emo, Ontario (population 1,333) voted by a margin of 3 to 2 to turn down a resolution recognizing June as “Pride Month.” Voting against the measure were two councilors and town Mayor Harold McQuaker who said that it would be unfair because there is no “Straight Pride.”

Related: Dallas had a “straight pride” parade & only four people showed up. One of them attacked the others.

Well, every month and every day is straight, white, Christian, male, pride, heritage, and history month and day. And why is that? It is because in our patriarchal, heterosexist, white-supremacist, Christian-centric North America, white, heterosexual, Christian males’ lives matter more than any other. They are afforded an entire array of socially constructed privileges held back from all others based solely on the chance of their birth.

One day, hopefully not long from now when full equality and equity-based on social identities have been attained and ensured, the need for Pride festivals and set-aside months celebrating individual heritage and history will have evaporated.

When age-appropriate, full, ongoing, accurate, and detailed histories of nations become represented in the curriculum and taught in classrooms and in the larger society, then and only then can we end specific “heritage” and “history” months.

The negative vote taken by the Emo, Ontario town councilors amounted to a form of backlash.

New ideas and the movements they spark often appeared as challenges to the power structure and as enemies to the status quo, at least at first. When ideas that challenge entrenched systems of power, oppression, and privilege emerge, forces for the maintenance of the status quo often wage figurative and literal battles to exterminate counter-ideas and actions as well as to prevent and turn back any gains that progressive movements have fought so tirelessly to advance.

We see history replete with intense and often violent backlash from many factions against movements working to end, for example, the dehumanizing and oppressive institution of slavery, apartheid, human sex trafficking, and so-called “ethnic cleansing”; to advance women’s suffrage and movements for women to control their bodies; to respect workers’ rights; to advance the right to quality education and health care for all; to save our planet; to secure civil and human rights for people of color, for women, for LGBTQ people, for intersex people, for people with disabilities, for young people and elders, for people of all religions and for non-believers, for people of all ethnicities and national backgrounds; for achieving equality of opportunity for people of all socioeconomic classes; and the instances continue endlessly.

Susan Faludi, in her now-classic exposé, Backlash: The Undeclared War against American Women, details the intense resistance to feminist ideas and movements for gender equality. By shining an intense light upon this backlash, Faludi reveals and debunks the myths and stereotypes perpetuated by social institutions, from business to the media, working to restrain women in all facets of their lives.

Imagine this: Today is your first day at college. You have been looking forward to this day ever since you could remember. Excited about living away from home for the first time, expecting to encounter new people and new adventures. Your feelings are tinged, however, with a nagging and constant anxiety from which you can’t seem to escape. For quite some time, you’ve held a secret deep within the recesses of your soul. Here at your new college and living environment, you don’t yet know whom you can trust.

Can you tell your dormitory roommate, and if you do tell, what will happen to you? Will your roommate tell others? Will you be thrown out of your room, or even worse: Will you have to leave school?

And what if your parents find out? Will they disown you? Will they cut you off financially, forcing you to drop out of school? And what about your prospective professors and classmates? If they find out, how will they react? And how will this possibly affect your chances for future employment?

You have had heterosexual feelings and your gender identity matched your sex assigned at birth even before you entered puberty. But because you live in a small town and a larger society that doesn’t understand or even rejects your emerging sexuality and gender identity, you hide away in a closet of denial and dread, fearing to come out into the light of day. Now you have a chance to make a new start in your new home away from home.

These are the reasons why you decided to attend this particular college campus in this particular state. Back when you were researching possible campuses to attend, you came across an online article focusing on an action taken by the Texas House of Representatives, proposed by Republican State Representative Wayne Christian.

Back in 2011, Texas passed precedent-setting legislation by a margin of 110 to 24 which requires all public colleges and universities inside of Texas with a student center on “alternative” sexuality to provide equal funding and resources to establish and maintain so-called “Family and Traditional Values Centers” as well, in order to promote heterosexuality and straight marriage.

According to Rep. Christian’s amendment to the Texas budget for higher education:

It is the intent of the Legislature that an institution of higher education shall use an amount of appropriated funds to support a family and traditional values center for students of the institution that is not less than any amount of appropriated funds used by the institution to support a gender and sexuality center or other center for students focused on gay, lesbian, homosexual, bisexual, pansexual, transsexual, transgender, gender questioning, or other gender identity issues.

Christian admitted that he would rather have seen the existing “alternative” sexuality centers defunded and, therefore eliminated, but decided that his bill proposing funding for so-called “Family and Traditional Values Centers” had a better chance of passage. He said the new centers could now sponsor programs promoting chastity and marriage between one man and one woman.

These centers could also establish a “Heterosexual and Cisgender Speakers Bureaus” and train cis and hetero students to talk about their experiences in classrooms. This bureau could help counter the stereotypes, the scapegoating, the fear, and the ignorance surrounding cis and hetero lives.

Because of the new Family and Traditional Values Centers that have emerged throughout the state of Texas (which has the potential to trigger similar centers throughout the nation), we will possibly see greater understanding of heterosexual and cisgender lifestyles.

With this understanding, we might find fewer and fewer young people having to live in a closet of fear, fewer hate crimes targeting people simply because they are heterosexual and cisgender, fewer attacks resulting in injury and premature death, and greater chances for students to concentrate more on academics rather than on physical and emotional safety concerns due to their emerging heterosexual and cisgender identities.

We might also find closer family relationships, greater chances for career success, and overall, a new generation experiencing greater feelings of self-esteem and developing positive identities at earlier ages than ever before. These centers will give students the needed support and guidance when “coming out” as heterosexual and cisgender — what a great and needed service these Family and Traditional Values will provide!

Oh yes, Texas certainly is on the right track, politically! Other states need to take note, or they’lll be left behind this new and exciting trend with far-reaching implications.

Since we already have October set aside as “LGBTQ History Month,” I would imagine it’s not very far in the future that someone in the Texas legislature will propose the setting aside of a month, maybe December, dedicated to HSC (Heterosexual, Straight, & Cisgender) History Month. However, if that were to happen, the legislature would have to vote first to decertify the full year each and every year as HSC History and Pride Year as it currently stands.