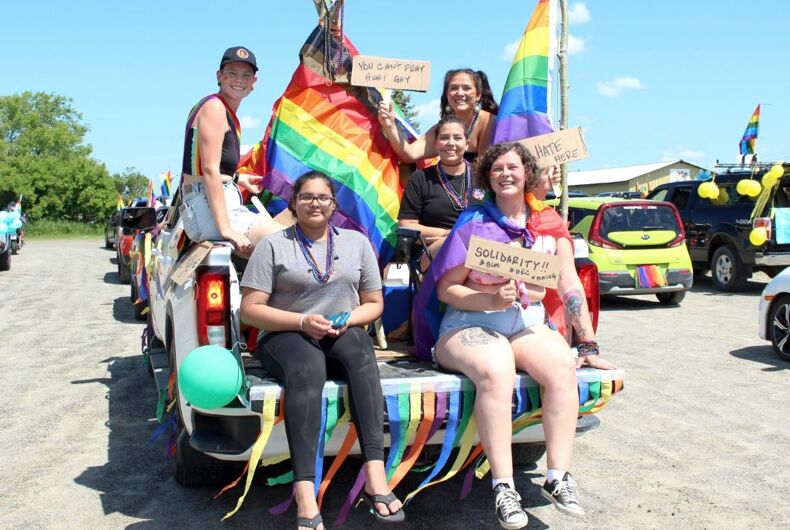 A small town’s government refused to recognize Pride Month, saying that it would be unfair because there’s no “Straight Pride.”

But LGBTQ activists – armed with rainbow flags, feather boas, and balloons – put together an “ambush” Pride parade for the town this past Saturday.

Related: After a man ripped down a small town’s Pride flag, the residents took to the streets

This past May, the town council in Emo, Ontario – population 1,333, near Canada’s border with Minnesota – voted against a resolution recognizing June as Pride Month in a 2-3 vote.

Two of the town councilors and Mayor Harold McQuaker voted against the resolution. The mayor said that it would be unfair because there’s no “Straight Pride.”

That’s when Borderland Pride (an organization behind several Pride celebrations in towns near the Minnesota-Ontario border) co-chair Douglas Judson started to put together a plan, working with residents and businesses in the area to plan an “ambush event.”

Over the weekend, a 70-vehicle parade convoy carrying hundreds of supporters showed up in Emo. Some of them lived nearby, others said they drove up to three hours to attend the event.

They set up booths, handed out Pride flags, and gave prizes for categories like “Emo Fair Queen 2020.”

“This was like something that brought joy to our community during a time when, frankly, we’re all kind of starving for a bit of human connection,” Judson told HuffPost Canada. “That’s part of the exercise of Pride is that in some ways we have to really push the envelope.”

“It exceeded our wildest expectations,” he continued. Judson grew up in Emo. “It was really something to have people care that much about sending this message about the need for Pride in small communities.”

In addition to the “ambush” of Pride, the Northern Ontario Pride Network has filed a complaint with the Human Rights Tribunal of Ontario, saying that “homophobia was the only reason behind the decision to deny” the resolution.

The complaint argues that this is a form of discrimination on the basis of creed, sexual orientation, gender identity, gender expression, and family status.

“In this day and age, it is unheard of for an Ontario municipality to defy the law and to refuse to recognize Pride in such a plainly discriminatory manner,” said the Northern Ontario Pride Network in a statement.

Black trans woman character in “Bob’s Burger” is played by a white man. That will change.