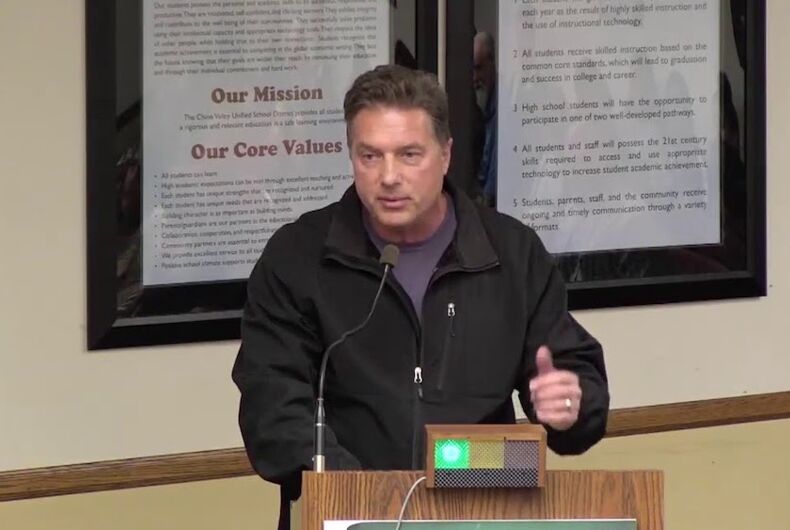 Mike Cargile, a GOP candidate running for California’s 35th U.S. House seat who has gotten endorsements from the state’s Republican Party, has a history of making racist and anti-LGBTQ posts on social media.

Cargile also believes in the QAnon conspiracy theory that Trump is trying to breakup a shadowy international child trafficking ring, is Islamophobic, has called the COVID-19 epidemic a “scamdemic,” has used the n-word in his social media posts, calls asylum seekers “illegal aliens,” and believes the LGBTQ rights movement wants to destroy society.

Related: QAnon conspiracy theorists are rallying for Trump, but why?

“The California Republican Party has backed his congressional campaign and stated on Facebook in January that it is ‘proud to endorse’ him,” Eric Hananoki at Media Matters wrote.

Among Cargile’s anti-LGBTQ posts are a July 2, 2019 Facebook post saying, “Thank a straight person today for your existence: Straight pride.”

In an August 29, 2019 post, Cargile said he thinks schools that teach about LGBTQ history should start with Sodom and Gomorrah, a Biblical story in which God rains hellfire upon two towns for their unrighteousness and unlawfulness. (Christian fundamentalists say the towns were destroyed for tolerating homosexuality, but that’s a narrow reading of the entire tale.)

Cargile has also posted numerous Facebook posts alleging that Muslims are secretly trying to turn America into an Islamic republic that allows terrorism. He also said that he now identifies as an “angry black man” and will repeatedly shout the n-word, adding, “I think it’s a whole lot easier to change one’s skin color than change their gender, don’t you?”

Here are some of Cargile’s other bigoted posts:

Cargile’s Twitter profile includes the QAnon slogan and “#OathKeeper,” likely a reference to a far-right armed militia group. He has also tweeted and retweeted the QAnon slogan, and responded “absolutely” to a user’s tweet that “now’s the time to get On Board” with “#QAnon.”