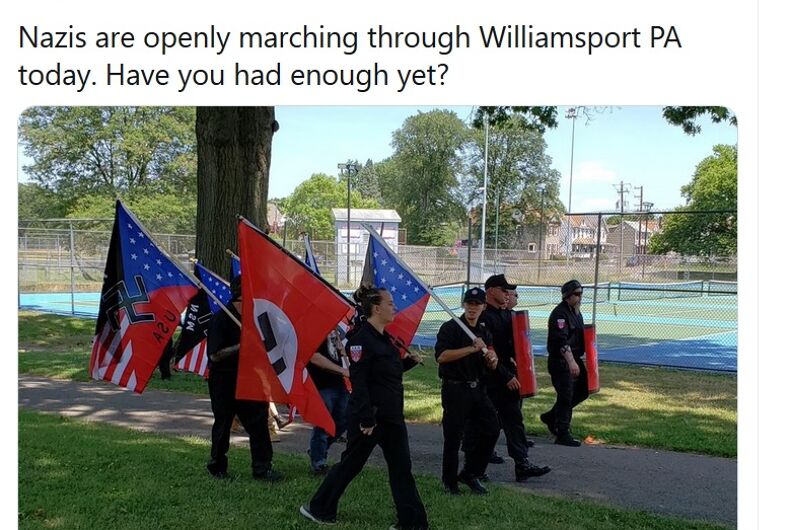 A neo-Nazi organization held a march this past Saturday in Pennsylvania where they used racist language and chanted homophobic messages.

The National Socialist Movement (NSM) has been designated a hate group by the Southern Poverty Law Center (SPLC), which says that the NSM is most notable for its violent racist, antisemitic, and anti-immigrant rhetoric. But they also don’t like LGBTQ people much either.

Related: An antigay hate group is trying to raise money off the Charlottesville tragedy by blaming gays

At a rally that was held in Williamsport in central Pennsylvania, members “led a chant against [gays] using the ‘F’ word,” according to a report on Penn Live. A woman in the group shouted “God hates the gays.”

The protestors also chanted about Williamsport Mayor Derek Slaughter, who is Black, calling him the n-word. The NSM had applied for a permit to demonstrate in the town, but Slaughter denied it, citing social distancing rules put in place to fight the COVID-19 pandemic.

“The last I checked this is still the United States of America,” a protestor yelled, referring to how the group was denied a permit.

The group of about fifteen protestors carried Nazi flags, wore swastika armbands, and flew flags that were partly American flags with swastikas on them.

Local businesses were worried about safety and many closed for the day, according to NorthCentralPA.com.

Jason Fink, the president of the Lycoming (County) Chamber of Commerce, said that the march wasted local resources and hurt local businesses.

“Vast public resources were put out at a time when funds are thin,” Fink said. “Businesses such as restaurants are forced to question opening when they’re just barely getting by already with the restrictions placed upon them by the governor.”

The march reportedly lasted less than an hour. There was “no known criminal and/or property damages associated with the protest,” according to Williamsport police.

Nazis are openly marching through Williamsport PA today. Have you had enough yet? pic.twitter.com/lI7irwL48Z

WILLIAMSPORT, PA. a literal nazi March about 40 minutes from my hometown. I’m trying to learn names and workplaces/schools to notify. These people don’t deserve to feel safe doing this. pic.twitter.com/QZwz6fCnr7

can we talk about the fact that there was a NAZI PARADE IN WILLIAMSPORT TODAY, JULY 18, 2020 pic.twitter.com/QGDvBphSHe