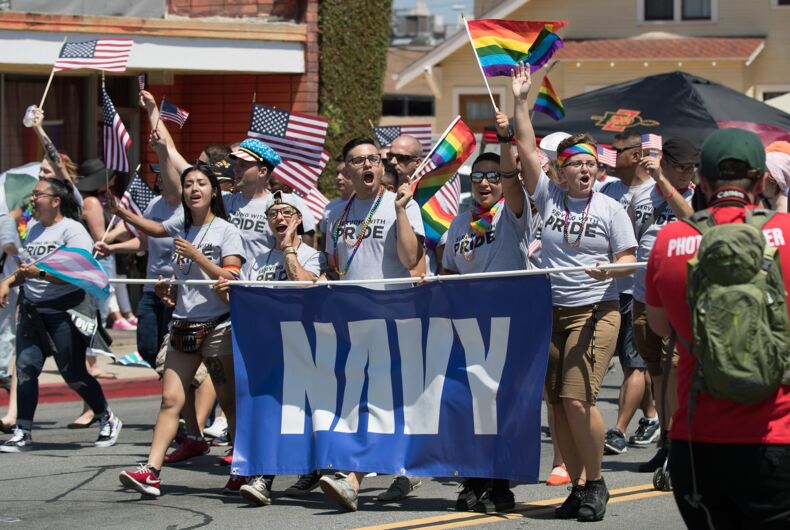 In a highly publicized move, the Pentagon has issued guidance that sidesteps Donald Trump’s opposition to removing symbols of the Confederacy from military bases. The measure would prohibit flags other than the U.S. flag, state flags, and military-related flags.

Pride flags would also be banned under the new guidance.

“The flags we fly must accord with the military imperatives of good order and discipline, treating all our people with dignity and respect, and rejecting divisive symbols,” Defense Secretary Mark Esper writes in a memo announcing the change.

“The memorandum does not authorize public display of unlisted flags in the Department of Defense,” Pentagon spokesperson Lisa Lawrence said in a statement to the Washington Blade confirming that rainbow flags would not be allowed.

Trump has vociferously opposed the removal of Confederate symbols, statues, and the renaming of military bases that carry the name of former rebel leaders and officers. The move is widely seen as a way for the military to work around the president’s support for white nationalists.

Democratic presumptive presidential nominee and former Vice President Joe Biden has supported the removal of names celebrating those who betrayed the U.S. in order to protect the institution of slavery and has pledged to explicitly ban Confederate symbols from military installations. He also vowed to ensure the rainbow flag is allowed.

LGBTQ groups affiliated with the military would be unable to use the rainbow flag during Pride celebrations and both members of the military and civilians would be prohibited from displaying the symbol in their workspaces.

“We were shocked to learn DOD’s (Department of Defense) new policy on the public display of flags bans the Rainbow Pride Flag from DOD workplaces,” Rudy Coots, president of DOD Pride, told the Blade.

“Banning the Rainbow Pride Flag will have the opposite effect of the policy’s intended purpose of improving morale, cohesion, and readiness. For LGBT soldiers, sailors, marines, airmen, and civilians protecting our nation each and every day, and their allies, the flag is a joyous symbol of hope, acceptance, and accomplishment that should continue to be displayed proudly.”

Banning the Confederate flag from military installations was long overdue.

Banning the LGBTQ Pride flag — the very symbol of diversity and inclusion — is undeniably wrong. The Pentagon should ensure it is authorized, or as President, I will.
https://t.co/rvA4F2YcPS