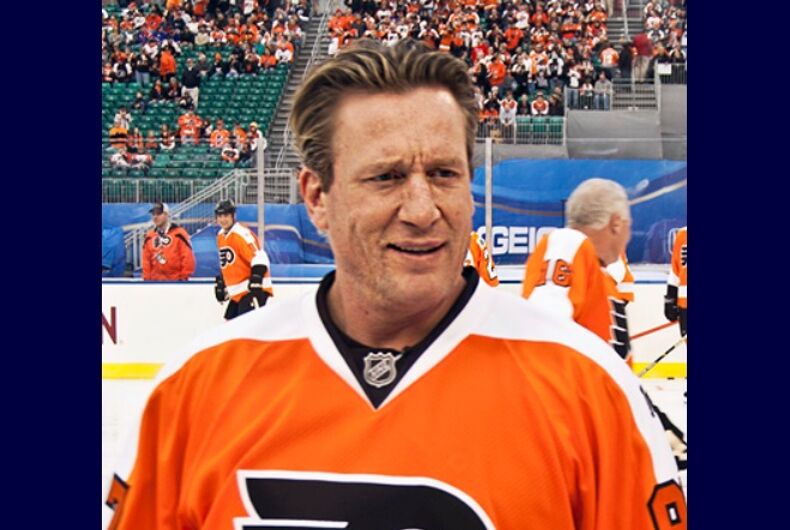 A former professional hockey player is suing NBC Sports, claiming he was fired due to anti-straight discrimination.

Jeremy Roenick played for several NHL teams before he retired in 2009 and worked as a sports analyst. In 2020, he made a sexual joke about a female co-worker and got fired from NBC. Now he claims that’s bias against straight men.

Speaking on the hockey-focused Spittin’ Chiclets podcast this past December, Roenick said, “I’m swimming with my wife and Kathryn, and they’ve got their bikinis on, and they look f**kin smokin.”

He was referring to Kathryn Tapper, a sportscaster with NBC’s Football Night in America. She also covers the NHL for NBC.

Roenick was suspended and he issued an apology. NBC Sports later fired him as a commentator.

“He won’t be returning to NBC Sports,” an NBC representative said in February. “We have no further comment.”

While it’s 2020 and people should know not to talk about their coworkers as if they’re sex objects – especially when they know they’re being recorded – Roenick is saying that NBC Sports only fired him because he’s a straight man.

So he filed a lawsuit for wrongful termination was filed with the New York Supreme Court, arguing that NBC violated the state’s ban on discrimination based on sexual orientation and gender.

“I’m really hoping we get to see her quads during this program,” Weir said in the video, even though Tennell didn’t make any quadruple jumps in the footage he was “commenting” on (the joke was a pun about quadriceps, or thigh muscles).

The video was removed from social media and NBC issued a statement saying that they did not “condone” it – more because of a “camel toe” joke someone else in the video made – and Weir was ultimately not fired by NBC.

Roenick cites the Weir controversy in his lawsuit, saying that he asked why Weir wasn’t fired for a joke about a woman’s “quads” while Roenick was fired for discussing his coworkers “a** and boobs” and calling her “f**kin’ smokin’.”

He says his supervisor Sam Flood told him Weir “is gay and can say whatever.”

Roenick also alleges that he asked to speak at the Republican National Convention in 2016, but Flood told him that “would not look good on your NBC record.” He claims that his support for Donald Trump is another reason he was fired.

Trump administration memo explains how to spot a transgender woman