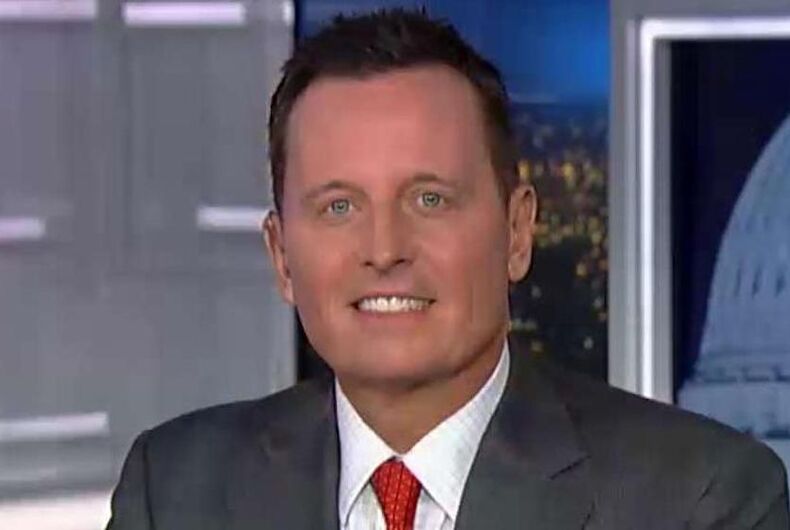 The LGBTQ Victory Fund does not come to play.

The political group has an incredible success rate of supporting LGBTQ candidates and their endorsement is one of the most coveted in queer political circles. Now they can add “humiliating a gay former Trump administration official turned Twitter troll” to their list of wins.

Richard Grenell is the former U.S. ambassador to Germany who was reportedly loathed by the country’s government and was later appointed acting Director of National Intelligence. He was the first out gay man to serve in a Cabinet-level position.

Grenell’s nomination as ambassador was controversial since the political operative had a history of sexist and far-right social media posts. His tweets were cited during his confirmation hearings. Within hours of landing in Berlin, he insulted the country’s leadership and has since resigned.

Since leaving government service, Grenell has returned to his former occupation as a Twitter troll. He has attempted to pick fights with journalists and politicians and frequently loses miserably.

Retweeting a link to a profile on the Victory Fund over the weekend, Grenell proclaimed the group’s goal of helping LGBTQ candidates get elected is “dangerous and offensive because it assumes all gay people think alike.”

“Gay is NOT an ideaology [sic],” he tweeted.

He went on to accuse the group of being partisan and tagged the IRS in one tweet that insinuated that their lack of an endorsement for a specific Republican candidate should cost them their tax-exempt not-for-profit status.

The problem? The group is a non-partisan political organization and is not tax-exempt. And the candidate never sought the group’s support.

The group’s smackdown back at Grenell left the internet in awe.

“It costs $0 to love yourself,” the group tweeted back to Grenell. “Richard Grenell, you oughta try it sometime.”

“We endorse far fewer Republicans than Dems, but that’s because so few LGBTQ people are running as Republicans. This is about the candidates that are running right now, not about our endorsement process. We endorse pro-equality, pro-choice GOP candidates.”

“We stand for equality above party politics. That is how it should be, right?”

This thinking is dangerous and offensive because it assumes all gay people think alike.

Gay is NOT an ideaology. https://t.co/tQZWZEJgfj

It costs $0 to love yourself.@RichardGrenell, you oughta try it sometime.