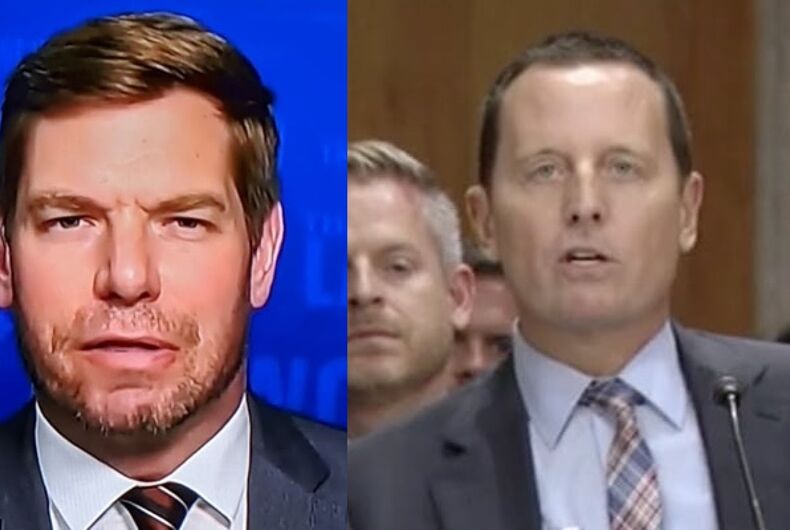 Out Republican and Trump administration official Richard Grenell, who repeatedly covered up for Donald Trump and inflamed international tensions as the U.S. Ambassador to Germany and as the acting Director of National Intelligence, is expected to resign as ambassador soon. He is also expected to step down from his role as the head of intelligence after John Ratcliffe was confirmed by the Senate earlier this week.

German government officials publicly shunned Grenell and ridiculed him, but Rep. Eric Swalwell’s (D-CA) Twitter battle with him shows just how little people think of him.

As acting Director of National Intelligence, Grenell promised to release a recording of former National Security Advisor General Michael Flynn’s phone calls with Russian officials. Flynn pleaded guilty to lying to the FBI about his contacts with Russian government officials during the campaign and before Trump took office but later withdrew his guilty plea.

Attorney General William Barr recently announced the Department of Justice will drop all charges against Flynn, but a federal judge has put the unusual decision on hold amidst allegations the move is politically motivated at Trump’s direction.

Grenell, who has a history of making inflammatory tweets, got into a testy back-and-forth with Swalwell last week on the social media platform. Swalwell challenged Grenell to release the recordings to prove that Barr didn’t drop charges against Flynn just to improve Trump’s chances at re-election.

During the exchange, Grenell promised to release the tapes. He still hasn’t.

Thanks for showing up on Twitter. You never once came to brief the Intel Committee (First DNI Director who failed to do so). If you have nothing to hide, why don’t you release Flynn’s call with Russia? #ShowUsTheTape https://t.co/2CbV9O1xMA

Those are coming. It’s very important for the public to see ALL of them. For too long the public has been misled. Just compare your committee’s transcripts to your public statements! #troubling https://t.co/gzyNJuQJDY

With Grenell out as the head of America’s intelligence forces, Swalwell took to Twitter to castigate the controversial official with an epic slam.

“All you have to show for your work is the dirt on your boots from shoveling and burying evidence for @realDonaldTrump,” Swalwell tweeted in one portion of the exchange.

But the back-and-forth didn’t end there. The two have continued trading barbs all day with Swalwell even quipping that Grenell is “like his former boss, he’s just a tough guy on Twitter.” At one point, he told Grenell “Lay off the Trump Kool-Aid. You’ve had too much.”

Tick tock. “Those are coming.” Well, you’re no longer director and the Flynn tapes never came. All you have to show for your work is the dirt on your boots from shoveling and burying evidence for @realDonaldTrump. #ShowUsTheTape https://t.co/ldYLn9LcQl

The guy who spread “Russian propaganda” is the one who asked Russia to hack his opponent. It’s also the guy who said he believed Putin over the brave intelligence officers you betrayed. That guy is @realDonaldTrump. You chose to enable him. I choose to check him. https://t.co/ZgH2PHrXua

Weaponize? History lesson: Democrats were in the minority for the Russia Investigation — it was a GOP-led investigation that allowed witnesses to not answer questions. And the Mueller investigation came from @realDonaldTrump’s appointees. So, show us the Flynn tapes or buzz off. https://t.co/H4AzYhAolv

— Jr. meeting with the Russians in Trump Tower

This is so comical. The Republicans led the Russia investigation, which ended in March 2018. They chose to not release the transcripts. What on earth are you talking about? I’m worried about you. Lay off the Trump Kool-Aid. You’ve had too much. https://t.co/BVhEAS3Oya

Sad to see that @richardgrenell has assumed the same kind of deceptive and deficient logic that @RepRatcliffe used during impeachment. If any individual *fact* witness does not or cannot assert a *legal* conclusion, that does not mean that that legal conclusion cannot be found. https://t.co/W0I74I8j0s

Hey Dan, remember the time @RichardGrenell came and briefed Congress and cleared all this up? I don’t either. Like his former boss, he’s just a tough guy on Twitter. But unlike every DNI before him, never had the nerve to appear before Congress and defend a single thing. https://t.co/pVbVH2Eic8

But all of this is secondary to what you were supposed to be doing as DNI. You literally had one job, manage intelligence. Somehow, while dozens of other countries were responding to #COVID19, you were focused on resurrecting Trump’s crazy theories. And here we are. #YouHadOneJob https://t.co/pVbVH2Eic8

We are making progress!

✅ You promised a Flynn tape, still haven’t shown it https://t.co/BCASeRNcxM

Is this a real person or a Trump AI account? This started because you said as DNI you’d release the Flynn tapes to prove the batty Trump conspiracy. You didn’t (& you refused to come to Congress). Now that you’re gone, it’s time to “brief the American people.” You had your chance https://t.co/WssN1V98h6

Grenell was the first gay person appointed to a Cabinet-level position. Some outlets have reported that Grenell will join the Trump re-election campaign after leaving the administration, but he has denied the rumor.

As ambassador, Genell breathlessly announced a new initiative to decriminalize homosexuality worldwide and claimed it had the full support of the president. Asked about the surprising pro-LGBTQ campaign, Trump said he knew nothing about it.