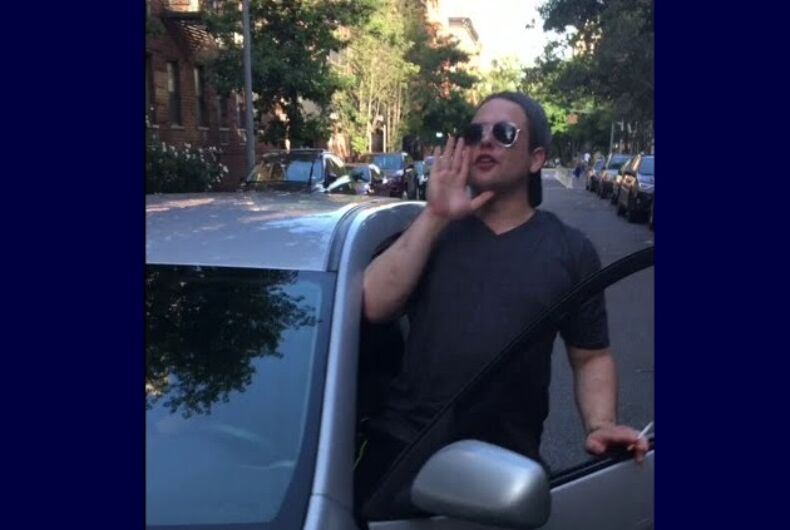 The man shouting the n-wordPhoto: Screenshot/YouTube

A white gay man was caught this past Saturday in Manhattan’s Upper East Side calling a Black person the n-word and then assaulting the passerby who recorded him.

The man appears to be frustrated about blocked traffic so he got out of his car – which had Connecticut license plates – and yelled the slur at a Black sanitation worker.

Related: Gay Trump supporter goes into hiding after his racist tirade is caught on video

That’s when the man noticed that someone was recording him.

“Are you recording me?” the man, who some on social media have allegedly identified as Joseph O’Brian,  asked.

He asked why he’s being recorded, and the pedestrian said: “Because you’re an a**hole.”

Instead of just saying “fair enough” – he was caught using the n-word – he responded: “I’m an a**hole? Honey, look in the mirror okay. The only person who is an a**hole is you for recording.”

“You are so fierce,” the man recording the video mocked.

“I know I am. Thank you. Are you gay too?” the driver asked.

The man with the phone said he’s not.

“No, you’re not? Well, you look like it,” the racist shouted, as if looking gay is an insult.

He then claimed that he’ll “get fans, honey” if the video gets posted online.

But apparently he wasn’t all that sure: he got out of the car and grabbed the phone and then threw it on the street.

“Find out who this racist person is and let us hold them accountable. This and any other act of racism will NOT be tolerated.”