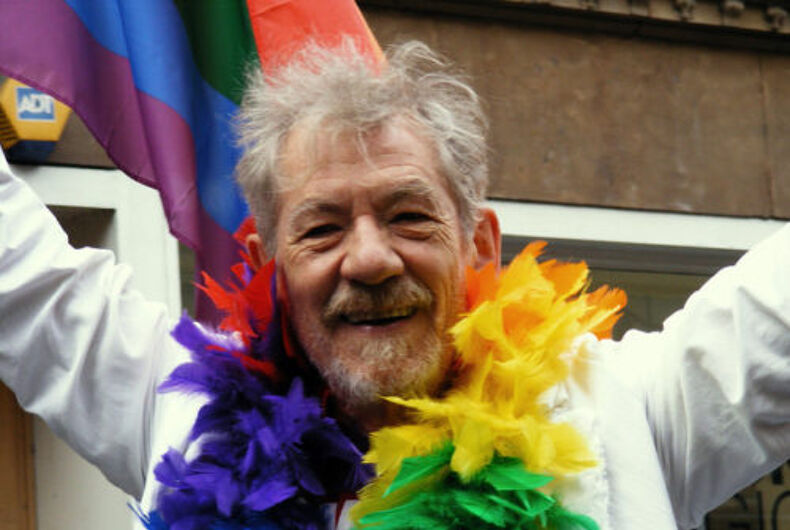 Sir Ian McKellen, actor and activist, rides in the 2010 Pride in Manchester.

Sir Ian McKellen has long been an activist. The British cultural icon came out publicly in 1988 to decry the UK’s Section 28 law that forbid the “promotion” of homosexuality, and since then has been active in a range of LGBTQ causes.

But last June, at age 80, McKellen launched a program that was clearly near to his own personal experience. As a patron for LGBT Foundation, in Manchester, UK, McKellen started Pride in Ageing, a program to help ensure that LGBTQ people age 50 and older in Manchester get the support and access to resources that they need.

Related: Here are 7 elder communities that are like living in the gayborhood

“It’s not a question of soothing people and wrapping them up in cotton wool, ” McKellen told the BBC. “I think on the contrary it’s probably to get them out into the world. You want to feel that you’re at least surrounded by at least friendship, and on occasions, love and respect, and all those things can be missing if people slip back into the old attitudes they were brought up with.”

At the launch, McKellen recalled during his own youth, homosexuality was criminalized. “Growing up, even in Lancashire, what is now Greater Manchester, 70 years ago, it was total silence,” he said. “There was no mention of sexuality other than heterosexuality at school, on the radio, in church. Absolute silence. ”

Having been forced to live in the closet when they were young, McKellen notes that it’s no surprise that people may slip back into it as they age.

“Is it any wonder that people who are older, when things are hazy, they may think back to a time when things were different [than they are now]?” he noted.

Of course, it’s not just failing memory that creates pressure on some seniors to become more reticent about their sexuality. Not all senior services are LGBTQ-aware, not to say LGBTQ-friendly. Moreover, social isolation that is common among all seniors is even more widespread among the LGBT community, creating a new kind of closet.

To address that problem, Pride in Ageing launched Come OUT with Us, a campaign to create spaces where anyone over 50 can come together, socialize, and learn new skills. The program has also helped developed other projects in partnership with local organizations, including Drag Yourself Out, a series of workshops to help participants develop a drag persona that displays their experiences as older members of the LGBT community.

By attempting to address the issues of discrimination and isolation that LGBTQ seniors experience, Pride in Ageing is ensuring seniors’ needs are integrated into the LGBT Foundation’s broader work. The program informs the services and support delivered by the Community Resource Centre in Manchester’s Gay Village. Pride in Ageing is also set to launch a new quality assurance standard and social prescribing service, which will help adult social care services and housing providers to better support their LGBT residents and service users. While Pride in Ageing may be based in the UK, it’s a model that would serve the US equally well.