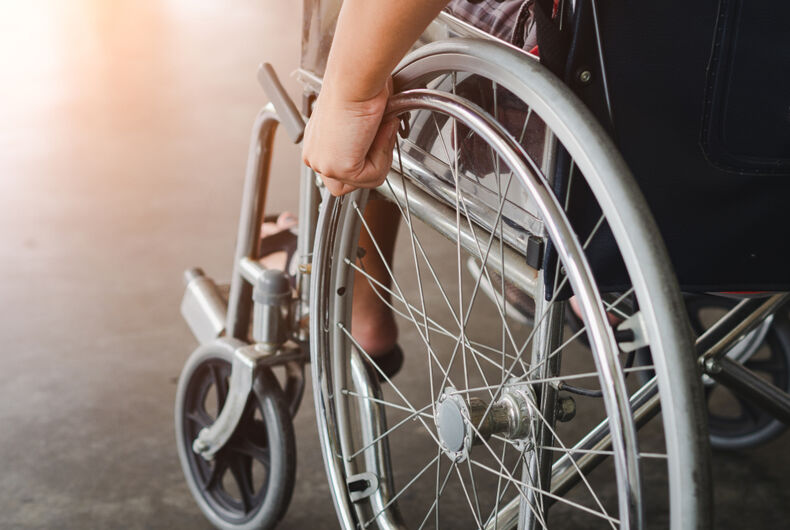 The Hospital of the University of Pennsylvania (HUP) is trying to prevent a transgender woman, known in court documents as Jane Doe, and her lawyer from amending a lawsuit accusing the hospital of ignoring her medical needs, wrestling her down while she disoriented from anesthesia, handcuffing her to a wheelchair and dumping her half-naked on the street after the trans woman had a post-surgical panic attack.

After the incident, Doe experienced increased gender dysphoria and had difficulty returning to work at the HUP. Her lawsuit alleges the HUP failed to reasonably accommodate her return and then “fired her under illegal pretenses on June 28, 2018.”

Doe was an out trans woman working at HUP who participated in a queer employee group that provided “education and policy guidance” to the hospital about treating LGBTQ patients. On Feb. 20, 2018, Doe became a patient at HUP for “a routine medical procedure and recovery.” However, she says the hospital disregarded its own protocols for handling trans patients.

“HUP and the other defendants ignored Ms. Doe’s specific instructions regarding her sensitivity to anesthesia and the nature of her post-anesthesia recovery, and failed to treat her accordingly,” the suit states.

Waking up disoriented, panicked and with no idea of where she was, Doe tried to climb out of her hospital bed in the recovery ward.

“Ms. Does’ trauma led her to flashback to a rape incident she suffered years before,” the lawsuit states. “She screamed, pleading for the men to leave the room. No one helped. Instead, they made things worse.”

Instead of giving her medications to help her, police officers from the University of Pennsylvania allegedly forced her into a wheelchair (shirtless and shoeless) and much heavier officers repeatedly sat on her. Doe says she feared for her life as officers eventually handcuffed to the wheelchair, leaving her bloodied with bruised ribs, a back injury and a broken finger.

The hospital, by its own admission, wheeled her outside instead of rendering post-operative care. A friend eventually picked her up. Doe says those involved treated her with “transphobic hatred,” especially one officer who dangled the handcuff keys in front of her face.

When Doe was set to return to work, a medical provider said the incident had exacerbated her gender dysphoria, a condition included in the Americans with Disabilities Act. Despite this, HUP allegedly didn’t discuss any way to accommodate or alleviate her disability. Instead, they eventually fired her.

Now Doe and her lawyer, Julie Chovanes, are suing on counts of assault, battery, intentional infliction of emotional distress, false imprisonment, medical malpractice, wrongful termination, violations of right to privacy, as well as violations to Title VII of the Civil Rights Act of 1964 for sex discrimination, Titles I-III of the Americans with Disabilities Act of 1990 and the Rehabilitation Act, according to The Pennsylvania Record.

Chovanes’s amendment to the case seeks to add “six defendants, ten counts, and fourteen pages of new allegations and 23 counts (10 more than the 13 counts in the first amended complaint), including new counts based on the Fourth Amendment, Due Process, and Equal Protection” more than two months after the original case filing.

The defendants say that Chovanes’s attempt to amend the filing occurred after the March 30 deadline to do so and, as such, it should be denied, but such filings are allowed in federal cases as long as they related back to the original incidents that caused the lawsuit, Chovanes told LGBTQ Nation.

Doe’s lawyer believes the case should interest non-trans people for two reasons: because it involves a hospital mistreating a marginalized person in their most vulnerable and delicate state (post-surgery) and because institutions should be held to their own standards. In short, policies ensuring the fair treatment of trans and other patients are worthless if they’re not actually followed.