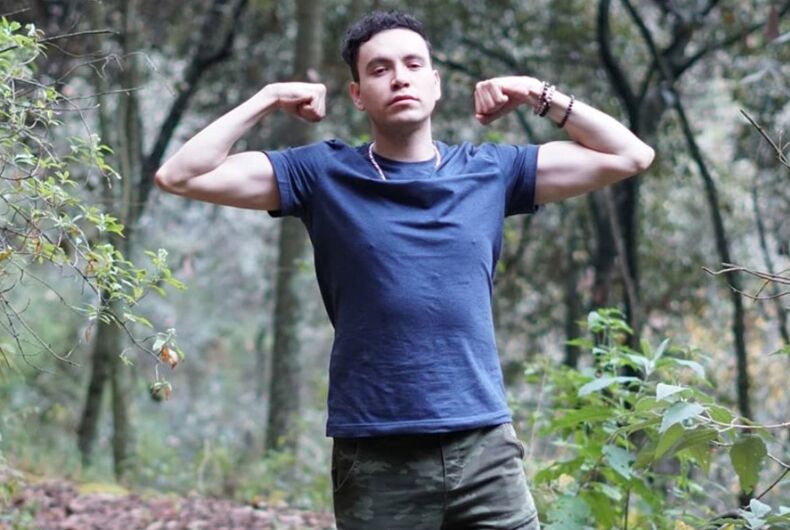 Mexican singer and DJ Raymix rocked the Latin music world on June 5 when he came out as gay. As a leading artist in regional Mexican music, his surprise announcement was brave and a notable shake-up to the very heteronormative genre. This news was coming from a guy who broke through with the hit single “Oye Mujer,” Raymix’s ode to a captivating woman in the club.

“Can you believe that in 2020 there are people in the industry who told me not do this video?” says Raymix at the start of his YouTube video titled “I Officially Declare Myself Gay” in Spanish. “That I should stay quiet and pretend to be a person that I’m not because I wouldn’t be successful. They told me the world is not ready for an artist who sings cumbia, or regional Mexican music [to come out].”

A smile comes across Raymix’s face when he adds, “With so much pride today, I want to tell you that I’m gay.”

Raymix, whose real name is Edmundo Gómez Moreno, coming out as gay is a game-changer for regional Mexican music, a catchall term that encompasses local cultural genres like ranchera, banda, mariachi, and cumbia music. The former NASA engineer became a pioneer with electrocumbia, his EDM spin on the genre.

That unique sound is best exemplified in 2015’s “Oye Mujer.” The song peaked at No. 7 on Billboard‘s Hot Latin Songs chart and, as of press time, the music video has over 636 million views.

Every culture has some form of toxic masculinity and for Latinx folks in Latin American and the U.S., it’s called machismo. Regional Mexican music is built off machismo and Mexico is reflective of that, having allowed same-sex marriage but with restrictions.

Raymix came out after his latest single “Tú y Yo” with Mexican pop icon Paulina Rubio hit No. 1 on Mexico’s Pop Airplay chart, meaning now that an openly gay artist has the most-played song in the country.

Fresh off making his groundbreaking moves in Mexico, Raymix talked with LGBTQ Nation about coming out, the reaction to his announcement, and the future of his music career.

LGBTQ Nation: Congratulations on coming out! How are you feeling?

Raymix: I feel lighter. I feel happy. I feel it’s very important to be real with yourself. That’s why I decided to come out.

QN: How has the reaction been to you coming out?

Raymix: I was very worried about the reaction because the type of music I do falls under regional Mexican music. That genre always talks about the beauty of the girls and having straight relationships. I’m really surprised that people have given me a lot of support. I feel very relaxed now because I can be myself now. People are ok with that and that’s something I really appreciate.

QN: Why did you decide this was the best moment to come out?

Raymix: I needed to do it because my soul was telling me to do it now. This was something that was very important to me. And with Pride month, I feel like it was the perfect timing.

QN: You worked with two openly gay artists Esteman and Georgel on the “El Noa Noa” remix last year. Did that experience inspire you to come out?

Raymix: For sure. When I met Esteman and got to know his music, I was very impressed because his lyrics are amazing and his videos are well made. I was like, “Oh my God! This guy is so fantastic. He’s an openly gay man and people are supporting him.” He invited me to one of his concerts and I saw that. Georgel invited me to do the “El Noa Noa” remix. When we performed it, we had drag queens and everyone loved it because it was different. All of that inspired me.

QN: What was the inspiration behind your hit “Oye Mujer”?

Raymix: “Oye Mujer” was written in 2014. By that time, I fell in love with a girl. When you go through life, you realize where you feel more comfortable. In these past few years, I realized I was feeling more comfortable and even falling in love with men more than with women. In my life, I’ve had girlfriends, but that doesn’t mean I’m going to be a straight guy. Love comes in very different ways with many different people and that’s the beauty of it.

QN: You’ve collaborated with artists like Paulina Rubio and Juanes. Who do you want to work with next?

Raymix: I believe music is something we can use to unite cultures, languages, and different people. I would love to do something with Marco Antonio Solís. He’s very clever. I have a dream to someday collaborate with Martin Garrix. When I started making music, I used to watch some of his tutorials on YouTube. He showed me some tricks to perfecting my sound. I would also want to work with Becky G or Thalía because she’s another very good singer in Mexico.

QN: What are your thoughts on Mexico having some restrictions on same-sex marriage?

Raymix: Actually Mexico is evolving a lot. In Mexico City now it’s perfectly legal to have a same-sex marriage. I remember when I was a child that being queer was seen as something like disgusting and very bad. Now I’m seeing that people are evolving and everyone is moving forward. Mexico is more open than before. I feel like Mexico is making progress in many ways.

QN: I think it’s amazing that you’re an openly gay artist with the No. 1 song ["Tú y Yo”] in Mexico right now.

Raymix: I feel like this is the first time an openly gay artist is No. 1 on Mexican radio. I’m very curious to see if maybe after me more people will come out. Maybe artists in regional Mexican music or other genres.

QN: What are your plans for the rest of the year?

Raymix: We are hoping to do a tour in the U.S. with a drive-in theater concept. You can go with your family and watch a concert in your car. We would comply with health regulations and social distancing. If that happens, we’re looking at October or November.

QN: Do you have a message for your fans in the LGBTQ+ community?

Raymix: Life is something that’s very precious. If we have the ability to make our lives better by coming out, we should do that. Go for it. It’s really worth it. You will be double happy for living your truth. Believe me.