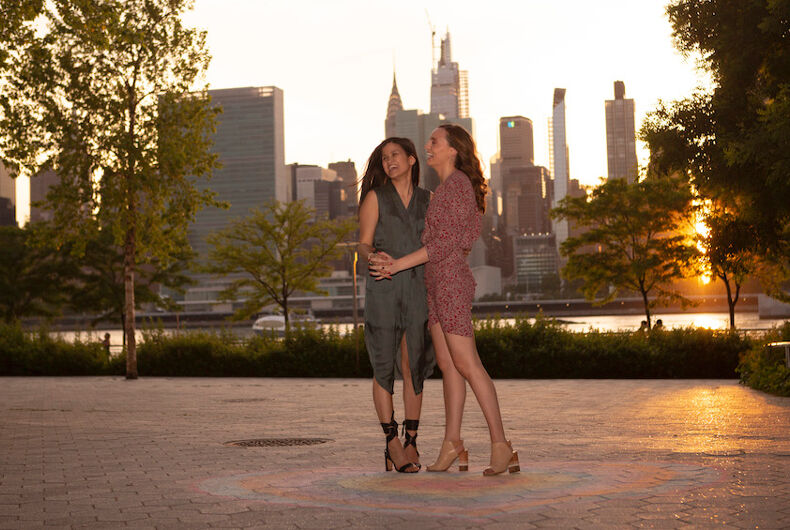 On Monday, Alyssa Kayhill, a musician who has been working on the front lines during the heights of New York City’s coronavirus epidemic as a nurse in a local intensive care unit, was reunited with and proposed to her girlfriend of eight years, Anhlinh Trinh, after the couple had spent three months apart to protect Trinh from contracting the virus.

Monday was Kayhill’s birthday, a beautiful day during Pride month and the first time she and Trinh had seen each other since the start of the epidemic.

Trinh had been staying upstate with her brother while Kayhill worked long shifts helping very sick patients, staying quarantined from all her family and friends while doing so. The time apart made Kayhill realize even more how much she wanted to spend the rest of her life with Trinh.

The couple had met eight years ago during a friend’s going away party, and Kayhill called it love at first sight. Ever since Trinh rolled up for their first date on a skateboard, Kayhill has appreciated her playfulness, her talent as a photographer and her deep love of family.

The couple reunited at a riverside courtyard outside of the TF Cornerstone property where Kayhill’s sister Kristie Loscalzo lives.

“We have been extremely proud of her, always as a nurse, but especially during COVID,” Loscalzo tells LGBTQ Nation. “Our family has always been very proud of Alyssa, but seeing her step up and really do the right thing for all of these people has just made us even more proud.”

Loscalzo said during the epidemic, the family worried about her safety, especially amid reports that medical workers didn’t always have adequate personal protective equipment. Loscalzo called it nerve-wracking.

“We really did try to just take it day by day and encourage her and support her in every way possible and let her know that we loved her and we were proud of her for everything she was doing,” Loscalzo said. She sent Kayhill a video every day of the city’s nightly 7 p.m. cheer for medical workers and first responders fighting the epidemic to keep her sister encouraged.

Kayhill wanted to meet Trinh during the nightly cheer, and Trinh agreed. But what Trinh didn’t know was that the moment would change her life forever.

Loscalzo contacted the TF Cornerstone management to tell them her sister’s story and the management was excited to hear it. They sent the building’s residents a memo asking them to be extra supportive and loud during the Monday night cheer.

“We contributed to the surprise proposal by rounding up our residents from 4540 and 4610 Center Boulevard to join in from a safe distance through cheers and applause,” said Zoe Elghanayan, Principal and Vice President at TF Cornerstone. “And they certainly did their part!

“We’ve all needed some uplifting news in the past few months, and we couldn’t have been more proud to support this lovely couple during Pride month,” Elghanayan continued.

Kayhill was especially excited to propose during Pride month as a celebration of queer love. She had written a love song for Trinh about a year ago called “Love Is.” Kayhill performed an acoustic duet of the song with Bobby Berk, the Queer Eye interior design guy, last year and it has come to mean a lot for Kayhill and Trinh.

In fact, Kayhill had a lyric from the song engraved in the engagement ring that she gave Trinh: “Love is what it will be.”

Kayhill tells LGBTQ Nation that the song isn’t just about their relationship but “about anyone who has struggled with adversity in the relationship as far as the outside world telling you that it’s not right, whether that would be in a gay situation or if you’re with someone who’s a different race. Anything where people are kind of judging you from the outside fo the love that you have.”

Trinh is Vietnamese and Kayhill is Italian, German and Polish.

“People have not always been on the side of our relationship, and [the song is me] wanting to tell her it’s going to be fine,” Kayhill said. “I’m willing to stand here with you and fight for this. It was one of the quickest songs I ever wrote… it felt gifted to me.”

As Loscalzo escorted Trinh to the courtyard, residents lined the area and stood on their balconies looking down on a chalked rainbow heart that one of Kayhill’s friends had marked onto the sidewalk where Kayhill stood waiting for Trinh to arrive. On one of the balconies, a trumpet player played The Beatles’s “All You Need Is Love.”

After the engagement, the newly engaged couple had a “socially distanced” picnic with some family members.

Here is a video of their engagement:

EXCLUSIVE: Top Latin music star Raymix came out as his song hit #1 on the charts. Here’s why.

How do we celebrate Pride when police are still beating & killing us?