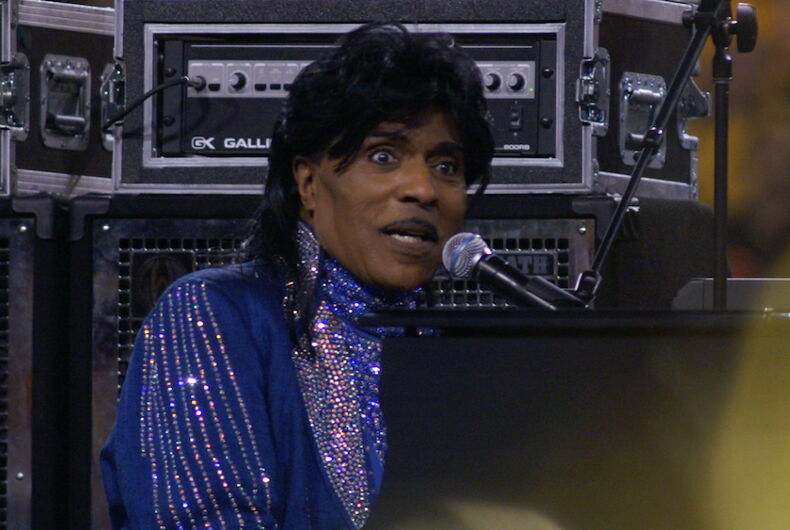 After recent health struggles following hip problems, a stroke, and a heart attack, Little Richard (birth name Richard Wayne Penniman) died of bone cancer on Saturday, May 9 at the age of 87. Although he’s hailed as a queer icon and a self-described “The King and Queen of Rock and Roll,” his flamboyant iconic style differed from the anti-gay Christianity he espoused later in life, leaving behind a truly conflicted legacy.

Richard was born with a slight limp which, along with his preference of playing “house” with girls, compelled other kids to call him a “faggot, sissy, freak.” He was molested by men in his hometown of Macon, Georgia (sometimes for money), and his father, Charles Penniman, brutally beat him for wearing his mom’s clothes and makeup at age six. His dad then kicked him out for being gay at age 15 and was shot and killed by a customer outside of his own nightclub when Richard was 19.

Related: 3 gay musicians just got fired from their Catholic church because, you know… gay

In his early days as an independent musician performing in Dr. Hundson’s Medicine Show (a show that literally sold snake oil to the audience), Richard would perform in a red dress as “Princess Lavonne.” He later learned more about queer fashion styling from another gender-bending performer in the lineup, Esquerita.

In his personal life, Richard had a habit of cruising for men with a female friend named Fanny and watching them have sex in the backseat. After two arrests for lewd conduct, he fled Macon to make his career elsewhere.

His breakthrough began in 1955 when he played a song called “Tutti Frutti” to his then-producer Bumps Blackwell at a New Orleans club during lunch. The song was a fast-spirited romp about gay intercourse. Its original lyrics went:

In 1956, a bowdlerized and straight-washed version of the song became his first hit single, with verses about two girls named Daisy and Sue replacing the sexual lyrics. He was 23 years old at the time, and his song took a wrecking ball to the down-tempo pop, jazz, and R&B playing on American jukeboxes at the time.

He combined gospel singing and his high falsetto with ferocious physical playing — one leg up on the piano while pounding out tunes. Some of his shows literally caused dance hall riots and inspired other rock icons, like Elton John and David Bowie, to pursue their own love of music.

In a recent social media post, Elton John wrote of the star:

“Without a doubt – musically, vocally and visually – he was my biggest influence. Seeing him live in my teens was the most exciting event in my life at that point. Goosebumps, electricity and joy came from every pore. His records still sound fresh and the opening few seconds of ‘Tutti Frutti’ are the most explosive in music history.”

He was also one of the few Black musicians to speak openly about how the music industry regularly underpaid Black artists, allowing their songs to be ripped off, covered by white musicians, and used elsewhere without any royalty payments.

But around this time, Little Richard’s legacy got complicated. In September 1957, he decided to leave rock-and-roll and attended an Alabama Bible school to become a preacher. In 1957, he married a woman named Ernestine Campbell, though his marriage wasn’t entirely surprising seeing as many of his sexual experiences had involved both men and women.

While performing new music in England during 1962 with Sam Cooke, Richard found that his gospel songs didn’t excite audiences nearly as much as his old hits, so he re-committed to a life of rock-and-roll. Around that same time, police arrested him during a men’s restroom raid in Long Beach, California. The incident caused his wife to leave him.

By the late 1970s, Bill Wyman at Vulture writes, Richard was “a cocaine freak, supplementing it with angel dust and heroin.”

“Every time I blew my nose there was flesh and blood on my handkerchief, where it had eaten out my membranes,” Richard said.

Richard went back to evangelizing in 1976. In 1984, decades after his last big hit, he said that homosexuality was “unnatural” and “contagious” in an interview, and by March 1985, he announced in a public sermon:

“I have rejected homosexuality. I have rejected sex. Now I get my thrills from the ministry… My true belief about Rock and Roll- and there have been alot of phrases attributed to me over the years-is this: I believe this kind of music is demonic… If [God] can save Little Richard he can save anybody… I talk about my life as a homosexual and drug addict because I think it is right to tell people what God has done for me.”

Richard later went on David Letterman’s late-night talk show, explaining that when he was gay, he wasn’t a man, but now that he was a man, he could experience sex with a woman. Letterman just nodded.

“I had girlfriends. I had a stack of women who followed me and traveled with me, stayed with me, and slept with me. I figured if being called a sissy would make me famous, let them say what they want to.”

In the 2000 biopic Little Richard, there’s no mention of his queerness. Nevertheless, Richard came out again in 2012, when he told GQ that he was “omnisexual.” Yet, by 2017, Richard made a veiled reference to homosexuality as an “unnatural affection.”

One can’t merely say that Little Richard died a homophobe or renounced his queerness when his life and persona as a queer entertainer made such a cultural impact, making “male vanity” a regular part of rock and influencing generations of performers afterwards. His makeup, pencil mustache, and campy demands that others “shut up” became much bigger than his attempts to wash all his queerness away with the blood of Christ.

As Tom Socca at Slate wrote, “He was joyously black under white tyranny, flamboyantly queer under straight tyranny, deeply God-troubled under the tyranny of secular commercial fame.”

So even though the man himself might have loathed the continual emphasis and repetition of his early life’s queerness, in a world that remains hostile to queerness, it’s all the more important to do so. The Little Richard at the piano, rather than the Richard Penniman at the pulpit, will continue inspiring up-and-coming queers and rockers for generations to come, and nothing can change that.