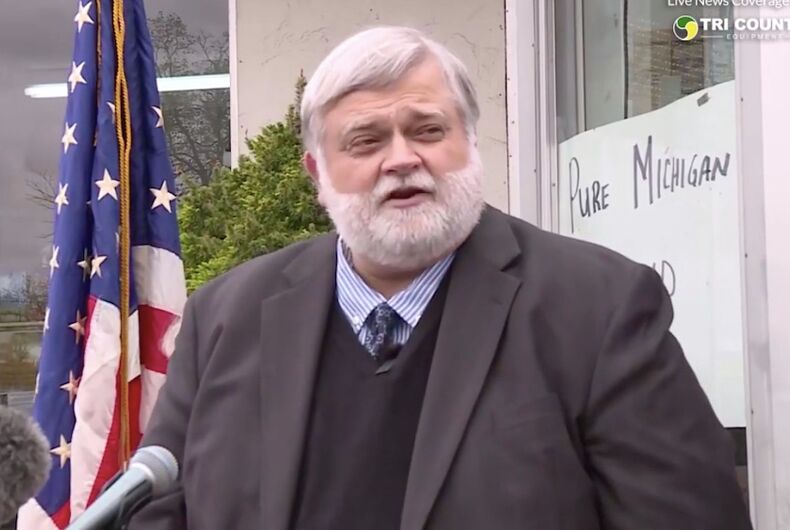 David Kallman, the lawyer representing a Michigan barber who refused to close his shop during his state’s coronavirus shutdown, has a long history of fighting LGBTQ rights in the midwestern state.

Right now, Kallman is representing Karl Manke, a 77-year-old barber who reopened his barbershop on Monday, May 4, in violation of Michigan Governor Gretchen Whitmer’s executive order shuttering all non-essential businesses.

Kallman says the Democratic Governor’s order is illegal because it wasn’t approved by the state’s Republican-led legislature. He also says it favors some businesses over others as “essential”, setting up some to thrive and others to fail during the ongoing epidemic.

However, a deeper dive into Kallman’s past shows that he has repeatedly opposed LGBTQ equality in Michigan.

In the 1990s, he represented a group of students from Jackson High School who fought against the formation of a Gay-Straight Alliance. According to Pride Source, Kallman allegedly accused the school of prohibiting student-led Bible groups from meeting, but he was forced to withdraw his allegation after the school district proved him wrong.

“His claims that our proposed ordinance would legalize polygamy, incest, pedophilia, and necrophilia were outlandish and inflammatory. It became very evident that Mr. Kallman was a far-right activist with a radical and hateful political agenda,” said Ken Fletcher, Delta Township Supervisor.

In 2019, he represented a female Planet Fitness user who said her civil rights were violated when the gym allowed a trans woman to use the women’s restroom. A court eventually threw the case out. That same year, he also sued the Williamston School District to overturn its anti-bullying and non-discrimination policy which gave trans students the right to use the bathroom matching their gender identity.

Little Richard was anti-gay when he died, but his queer cultural influence overshadows us all